Beer, wine, eats and good times: The South Australian brewery and Andy Freeman and the Sneaker & Jeans crew unveil plans for their most ambitious venue yet. 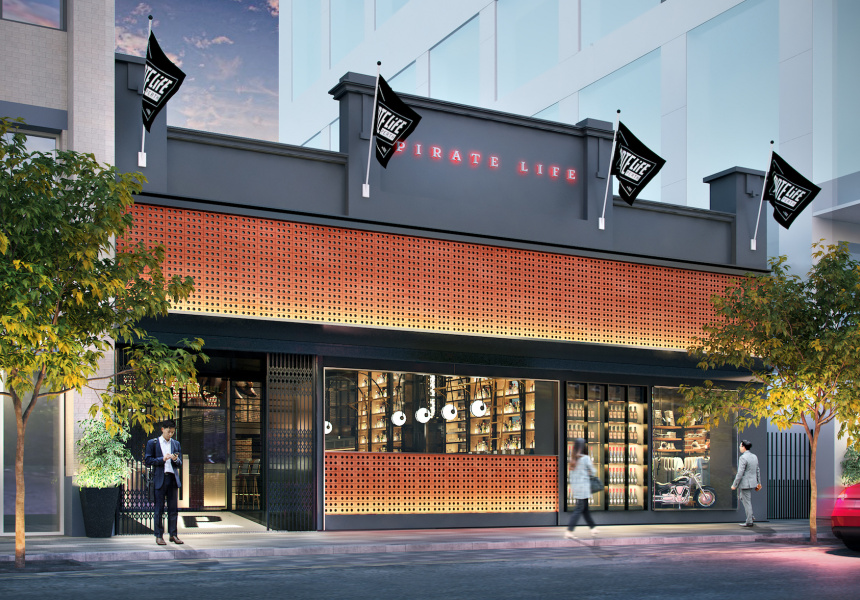 It looks like a brewpub and brews like a brewpub. But Pirate Life Perth – the newest and possibly the most ambitious opening for Andy Freeman and the rest of his the Sneaker & Jeans collective – is more than that.

Yes, Pirate Life Perth – the first west coast venue from the South Australian brewing success story (WA founders Michael Cameron, Jack Cameron and Jared Proudfoot moved to Adelaide to open the brewery in 2014) – is a pub with its own brewery. In addition to brewing almost all of Pirate’s Life main beers on-site (the pale ale and Throwback IPA will be brought in from Adelaide) the brewery will also brew custom beers for each of the existing Sneaker & Jeans venues which include American whiskey bar Varnish on King, late-night Japanese hangout Goody Two’s, and Mexican party den, Caballitos.

But beer, says Freeman, is just the start.

Taking over the former Sony building on Murray Street, the multistorey space will house three bars and two kitchens: one to focus on accessible beer-friendly eats and another to service the restaurant whose food and wine program will be angled more towards the special occasion and business crowds. “It’ll fit a thousand people … but it’ll still feel roomy,” says Freeman. There’ll be different spaces and feels. It won’t just be a giant open cabin with a big bar down one side.” And in typical Sneaker & Jeans style, spirits and cocktails, will also be part of the offering.

“I don’t know that much about brewing beer, but I’ve seen a lot of breweries and I’ve always wanted a shot at doing one but in a different way,” says Freeman. “Creatively, I’m restless. I don’t want to die wondering. In our industry, I think it’s a good thing to always be present and evolve and change and be adaptable. Covid was a testament to that. If you stood still, you were dead.”

Designer Marcos Cain of Stickman Tribe, a former Perth hospitality venue owner who is based in Dubai, has signed on to shape the look of the venue. In addition to being Pirate Life’s west coast headquarters – the space will include a retail store selling Pirate Life merchandise and beer – Pirate Life Perth will also double as the new Sneaker & Jeans offices.

Pirate Life Perth is due to open this summer.