The newest member of the Palace Arcade family will be home to New York-style pizza by the slice or pie, easy-going cocktails, an all-star video game selection and, crucially, plenty of space. 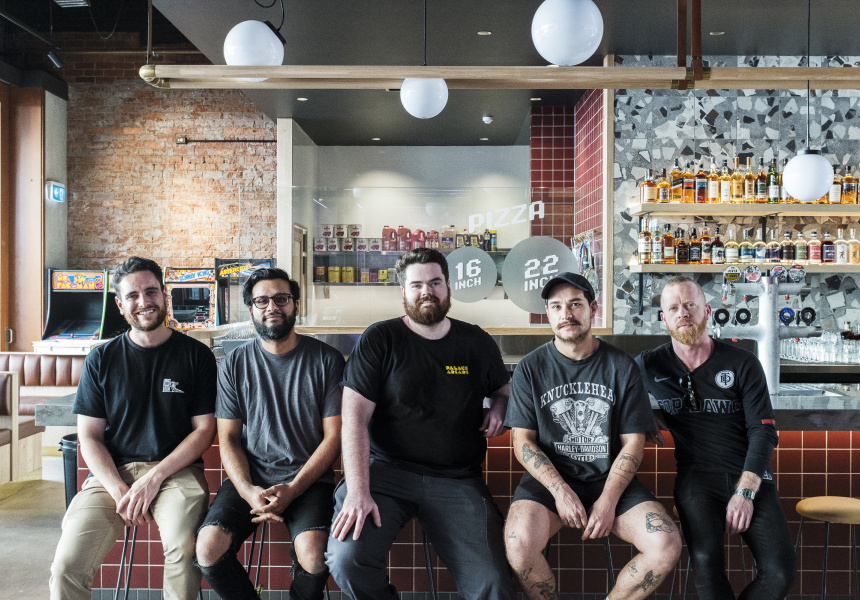 First there was the original Palace Arcade on Beaufort Street, a split-level house of vintage video games, great drinks and XXL pizza. Then came the Victoria Park outpost, an expansion that brought Palace Arcade’s winning formula to an airy space on Albany Highway. This weekend, the family welcomes venue three with the opening of Palace Arcade Fremantle next door to the National Hotel. And while Freo has no shortage of the things that made the Northbridge and Vic Park venues great, fans will notice an important new addition: space.

As soon as you round High Street you’ll see the former Lapa Fremantle has been transformed into a cavernous warehouse of ’80s and ’90s nostalgia complete with bright Tron-style neon. You’ll notice it in the various seating options scattered throughout the space, from low communal tables to custom-built booths. And you’ll notice it in the creation of different zones and pockets throughout the venue.

“This one has been about how to do commercial fit-outs properly and working with a good builder and designer,” says Saran Bajaj, one of the directors behind Palace Arcade. Palace’s other directors include Daniel Moore and Bajaj’s brother, Gaurav. “This one’s the first one we feel like we kind of got right. A lot of the other venues we tried to cram in as many games as we could, and I think it kind of affected patrons’ comfort.”

While there might be fewer arcade cabinets than at other venues, the selection here is all killer and no filler with classics such as Street Fighter II, Time Crisis and Teenage Mutant Ninja Turtles all present and accounted for. There is also a four-person Sega Rally. The pinball machines are all contained in the Apres Bar, an alpine-themed space complete with taxidermy and snow equipment that doubles as a private function room.

In a first for the Palace Arcade crew, there’s also a courtyard complete with park-style benches and an arcade-themed mural from graphic designer Michael Hartley of Hartley Design.

The initial food and drink will closely follow the existing Palace Arcade script: plus-sized New York-style pizzas available by the slice or in 16-inch or 22-inch pies; easy-going cocktails, wines and beers; and an impressive stockpile of booze on the back-bar. There are also plans to expand the menu to include lighter, less calorific options alongside the fried stuff.