The Old Synagogue Opens in Fremantle, After Laying Dormant for 20 Years

The heritage building is now home to four venues: a modern-Asian restaurant; a cafe-bar open from early till late; a cocktail bar hidden behind a bookcase; and a three-storey pub serving snacks, pizzas and traditional pub grub. Given its prominent location in the centre of Fremantle, it seems almost inexplicable that the Old Synagogue has been empty for 20 years. Dating back to 1902, the site was, as the name suggests, WA’s first synagogue – in operation for only eight years before its congregation moved to Perth. Since then it has been used as an auction mart, rug shop, clothing outlet, art gallery and cafe. It’s an iconic building, but one with considerable challenges. Plans for a four-storey hotel that was never built left behind a huge pit in the middle of the site.

The heritage building has now been reinvented by Ross Drennan and Drew Flanagan of Nokturnl Events, whose portfolio includes Oktoberfest in the Gardens and New Year’s Eve festival Foreshore. The three-storey site is now an impressive 1000-capacity dining and bar precinct, home to four very different venues. It’s Fremantle’s version of The Rechabite and State Buildings, further demonstrating Perth’s penchant for filling heritage buildings with food and drink venues.

“About two years ago, with how hospitality was going in Perth, we said we’d never get into bricks and mortar,” says Drennan. “But sometimes these things happen. We saw this come up for sale and thought there was a big opportunity to create a lot of different spaces.”

The building has been carefully restored and enhanced in just seven months. Design work was completed by Arcadia Design Studio in Beaconsfield.

“We had to fix a few structural issues and shore up the synagogue building, but we’ve kept the heritage fabric almost untouched,” says Drennan. “The mezzanine inside the restaurant is built up to the walls but not touching them, so it can be dismantled. It did need a lot of work, and my bank manager is definitely my best friend now.”

“With Arbor, it was important to capture the fact that people in Perth love drinking outdoors,” says Drennan. “Because we had a big venue with a lot of indoor spaces, we were able to take the risk and create a very outdoor venue with massive voids between levels. So it’s exposed to the elements somewhat. I haven’t seen anything like that in Perth.”

Cafe and beer bar Mr Chapple operates from a restored 1920s shop at the front of the precinct. It’s serving small plates such as patatas bravas, freshly shucked oysters and WA snapper ceviche, and coffee from Freo roaster Gesha. In January it‘ll add breakfast to its repertoire.

“Leigh’s a fantastic chef. He’s under the pump at the moment, because we’ve basically been at capacity since we opened the doors,” says Drennan. “Dean has won a lot of awards and I’m sure he’s got a lot more to come. He’s a fantastic cocktail-maker and bartender, he’s got all sorts of gadgets coming in from all over the place.” 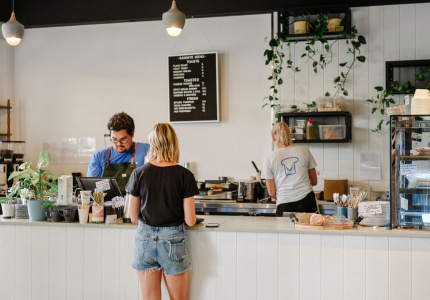