Brewery-fresh beer plus pizzas made with WA flour and ingredients. 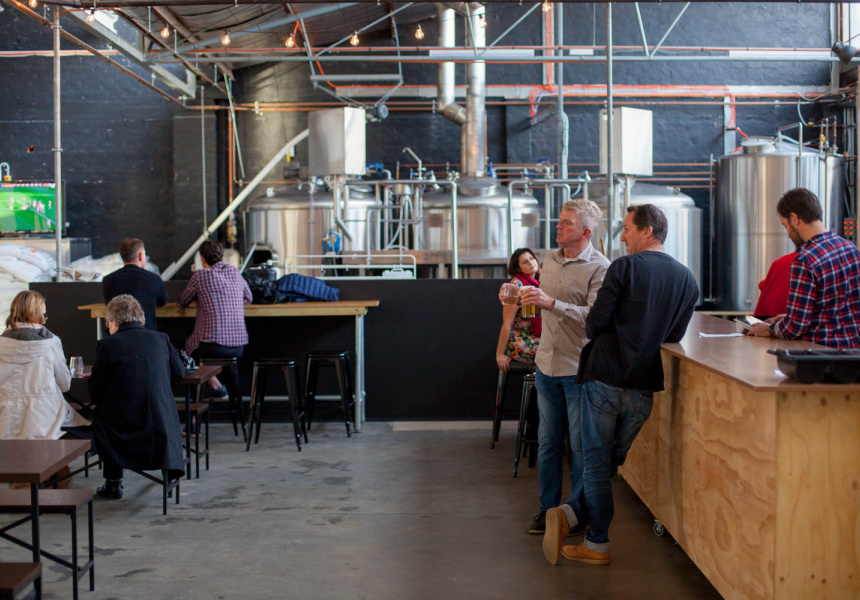 Nowhereman Brewing wasn’t supposed to be an ironic name. Reece Wheadon, the man behind the week-old brewery, was just being honest.

“The name was inspired by The Beatles song, which I love, but we also knew that to find space to open a brewery we really would have to settle for the middle of nowhere,” says Wheadon.

In this case the middle of nowhere is West Leederville, a suburb often used as a thoroughfare for crowds heading to Northbridge, Subiaco and Leederville. Since Nowhereman Brewing opened, people have been sticking around.

At eight o’clock on the brewery’s first Sunday night, Eagles fans occupy the long tables toasting victory with beer and pizza. Couples at the bar sample cheese and charcuterie while chatting to staff. The kitchen continues to knead dough, beer taps flow and plates are ferried across the dining room.

“It’s been great so far considering we’ve done one and a half Facebook posts and two Instagram posts,” says Wheadon. “We’ve had some good crowds through and in-between it’s been steady. On Saturday we served food non-stop.”

The opening menu is concise but considered. Pizzas are topped with restraint and pack a punch without becoming oily. Crusts on plates are a rare sighting with pizza dough made using Eden Valley biodynamic wheat. Cured meats and cheeses all come from WA with Albany, Nannup and Harvey among the areas represented. It’s a work in progress, but work is going well.

“We’re keeping it tight to start with. We want to make sure everything is perfect,” says Wheadon.

Paul Wyman, formerly of Margaret River’s Colonial Brewing, is making the beer. At opening there are three house brews on tap: the hoppy Crate Digger American Pale Ale, the malt-driven Leederville Lager and the Saison – a golden, dry Belgian-style beer. Wheadon hopes the full range will be pouring by the end of August. The beers are supplemented by local wines and spirits.

Despite it still being early days, Wheadon is already hatching plans to taking Nowhereman everywhere.

“We want our beer to be in other venues sometime in spring,” he says. “Next year we’ll look at selling from bottle shops.”