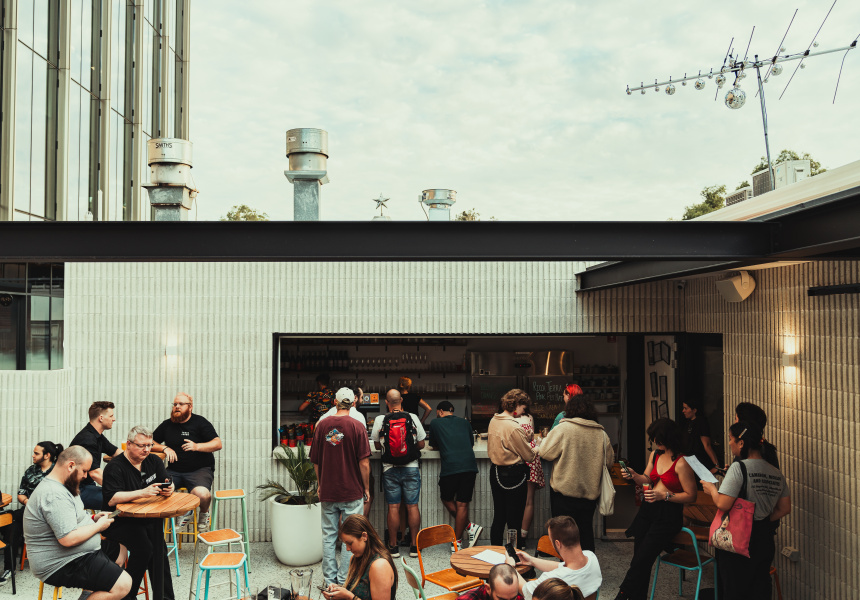 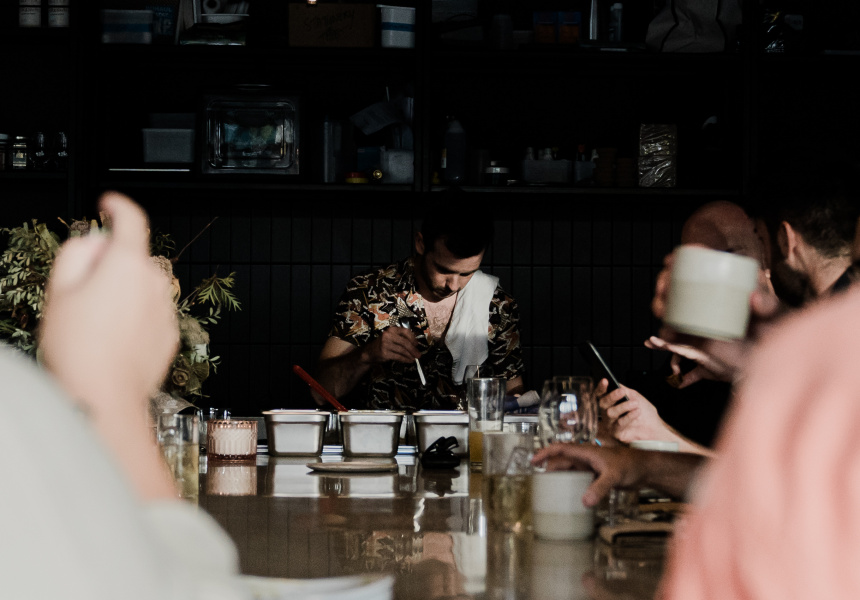 Kade Poole (previously at Palace Arcade and Long Chim), co-owns the venue with brother Kody and Nic Read (of hand-cut clear ice business Rocked Ice) and wants to provide a versatile space where people can stay all day and night.

“We're not trying to cater for two different crowds ... we're catering to two different points during your night," Poole tells Broadsheet. "If you want a bit of a drink and a party then come to IIII, but if you want to have something a bit more refined, then head inside to Naber.

“I've been in the industry for 10 years now and I've worked in Sydney, Melbourne, Glasgow and Greece, and I always said to Nic that I really wanted to open a disco courtyard and a nice date spot,” he says.

Naber, the front bar, is a moody, intimate space with booths, a large communal table and nooks for dining and drinking. There’s no service bar, removing the barrier between staff and patrons. Outside in the courtyard is a casual bar with high tables and stools, and disco balls hanging from the tree.

“I wanted to keep the menu small and tight with the idea that we run some verbal specials. When you combine the two menus it’s the same menu size as a restaurant,” explains Rutherford. “Inside is more serious [while still] fun with cheeky pig toast, abalone pasta and a “coconut blanket” for dessert, while outside is more casual and the menu is designed to get your hands dirty with dishes like our Japanese disco fries [with golden curry gravy and melted cheese].”

Local collaborations play an important role in the connection to local suppliers and produce, with Stomp Cafe designing a custom coffee blend for the venue’s coffee Martini that’s teamed with flavours from Chico Gelato and garnished with a house-made cereal-milk "Magnum" dusted in wattleseed “Milo”.

Also on the Naber menu: Arkady lamb with sweet leeks and bone barrow salsa; charred peaches with roasted sesame and silken tofu; and that aforementioned pig toast – which is already a crowd favourite – featuring pig's head terrine with Bread Bros Vegemite rye and fig-and-pét-nat jam. For dessert, there’s cheesecake with wakame jam and a vegan-friendly coconut blanket with blackberries and mango.

“I love cooking vegan and vegetarian food, meat is secondary,” says Rutherford. “With the lamb dish, there’s bone marrow, but I think the best part is the sweet leeks underneath. Because I have a small kitchen I have to get creative, so one day we’ll use plums in the dish and then the next it’ll be a jam.”

Beyond the wine and beer lists, which feature local producers such as Nowhereman Brewing Co, Beerfarm, Shelter, Voyager Estate, Blind Corner and Local Weirdos, you’ll find a thorough cocktail selection (with hand-cut ice, naturally) including a juicy Watermelon Cruiser garnished with a giant slice of watermelon, a Mojito made with green ants and a banoffee-style Old Fashioned with banana, macadamia and shortbread.