Opening a new venue during a global pandemic is a risky move, but Modus Coffee owner Sam Robins sees the silver lining. “We had to ask ourselves if we really wanted to do this, but hospitality venues are a really integral part of their communities,” he tells Broadsheet. “People have never felt so isolated, so we really felt that providing communities a gathering point in their neighbourhoods was a really positive thing.”

Robins co-owns Modus with Tobias Glass, and together they’ve expanded on their original Beaufort Street shop in every sense. The new cafe, which opened last week on the ground floor of the newly constructed Vic Quarter apartment complex in Victoria Park, has more floor space (at 95 square metres, it’s four times the size of their Mount Lawley site), with seating for 20, plus a larger menu that showcases the sustainable practices at the heart of Modus. “We’ve always felt the need to be socially responsible, so we try to minimise waste wherever we can,” says Robins. “We pickle and ferment leftover vegetables in-house. We take the excess milk that we steam for coffee and turn it into ricotta for sandwiches.”

New to the Modus menu is a section simply titled “Stuff on Toast”, where you’ll find the aforementioned ricotta paired with guacamole and pomegranate in a luxurious take on avo toast (on house-made sourdough). Plus roasted mushrooms with whipped gorgonzola, cut through with house-made pickled pears, and sous vide eggs with dukkah and thick-cut speck bacon elevating the cafe-breakfast staple.

Long-time collaborator Wade Drummond has been brought in to run the kitchen, expanding on the skills he developed during his time at Leake St Cafeteria. Marsela Ardi, formerly of Gordon St Garage, manages front of house.

A cabinet on the counter is stocked with golden pastries including canelés, galettes, and an unmissable cardamom and pistachio bun – a grown-up take on the trending cinnamon scroll. Pair one with a coffee, available in espresso, filter or cold brew, which is roasted nearby in the team’s East Victoria Park warehouse. Robins and Glass buy their green beans directly from Colombian farmer Luis Anibal Calderon, which means they’ve been able to develop a sustainable, long-term relationship that sees Calderon paid 92 per cent above the market rate for their house-blend espresso.

Robins and Glass prefer the cafe to be crowded with people rather than with decorative ornaments, so they’ve kept the Modus aesthetic clean and modern with polished concrete, simple white tiles and wooden seating. Outdoors, there’s a long bench where customers wait for takeaways with their dogs.

Robins sees the growing complex – which also houses Boston Brewing Co – as an opportunity for Modus to develop a community of its own. “Having this bigger space will allow us to have a proper home for collaborations with other chefs and venues that we think are exceptional. We’re looking forward to bringing venues from all around Perth here to Vic Park.” 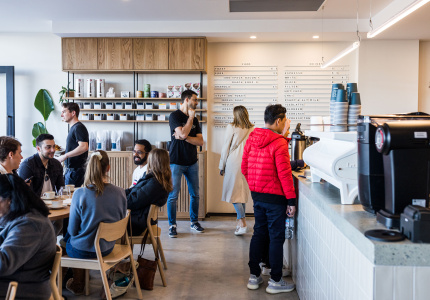