The wine list will focus on lesser-seen producers, and one of the state’s most promising young chefs will be in the kitchen. Opening a place in Fremantle wasn’t on the cards for Dimitri Rtshiladze, owner of CBD basement bar Foxtrot Unicorn – at least, not so soon after launching his first venue. But with the right space coming onto the market, plus a chance to work alongside the right people, it was an opportunity too good to turn down. And, as with Foxtrot Unicorn, Rtshiladze doesn’t want to pigeonhole his latest venture.

“The style of bars I like being involved with have a nice wide variety, but still have good selections and focus,” he says.

Although Rtshiladze has a tendency to downplay things – bar-watchers may remember him describing Foxtrot Unicorn as the Seinfeld of bars: “a bar about nothing” – the veteran bartender’s plans for venue number two suggest he’s put in plenty of thought.

It’s obvious in the name, a portmanteau fusing together two terms for gin: the Dutch “niew jenever” and an old English nickname, “mother’s ruin”. (While there’s going to be a healthy assortment of gin at the bar, the juniper-based spirit will also be joined by whisky, rum and other high-proof drinks.) It’s also obvious when the discussion turns to wine, Rtshiladze explaining that the cellar will eschew high-profile names in favour of lesser-seen bottles.

“We’re looking at having 250-odd weird wines on the list,” he says. “I’ve spent a lot of time over the last 10 months really seeking out weird local and international producers and trying to find wines that you’re not going to find anywhere else except at a couple of small stores.”

But most of all, this attention to detail is clear when it comes to food. Rtshiladze and co are joining forces with Blaze Young, a rising chef who learned her craft at places such as Madalena’s, Propeller and Billie H. Raised in Fremantle and now back living in the port city, Young is excited about her first head-chef role and cooking food that represents her.

“We want the food to land somewhere between a wine bar and that classic Fremantle pub vibe,” says Young. “I guess my style is just really good quality produce with minimal intervention. It’s such a nice community here as well, and I’m excited to give that community a place to hang out.”

Among the things diners can expect to find on the menu: Young’s riff on a steak sandwich; a classic French dip; bone-marrow toast; and dishes showcasing under-utilised Fremantle-caught fish such as red mullet, sardines and mackerel. According to Young, the kitchen will do its own whole-animal butchery, and most of the menu will be cooked over charcoal.

Visually, the space will be a mix of indoor – think jarrah floorboards and white walls – and outdoor, with an existing verandah being put to good use. Custom-made furniture is being built, including communal tables that, in future, will host nightly tasting menus to allow the kitchen to show off and celebrate small-scale producers.

Nieuwruin (12 Norfolk Street, Fremantle) is due to open in June. 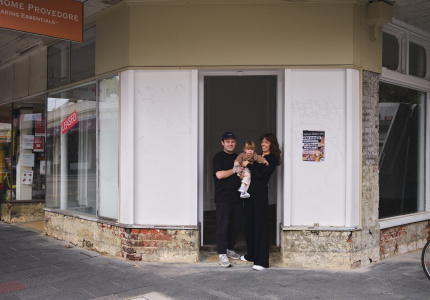 Peggy’s, a Licensed Sandwich Bar From an Andrew McConnell Alum, Is Coming to Fremantle