The restaurant serves real-deal Yunnanese dishes and makes its own pickled vegetables, savoury lentil jelly and wontons. Get there early on Saturdays for the Yunnan classic, Crossing the Bridge noodles. 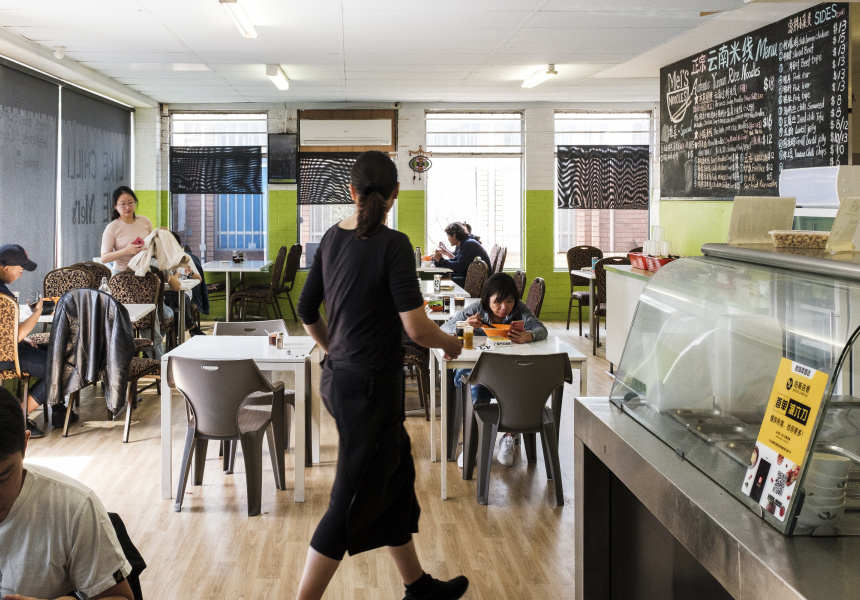 Intrepid eaters have a growing number of regional Chinese food options in Perth to choose from beyond the ubiquitous Cantonese: hotpots, “mouth-watering chicken” and other mala (“numb and spicy”) pleasures from the Sichuan food playbook (Kung Fu Kitchen is among the city’s oldest dedicated Sichuanese outposts); the wheat-heavy deliciousness of Dongbei in China’s north-east, as found at Mom Dumpling House; and great Shanghainese dumplings and dishes at Juicy Bao Bao.

Wander established Asian food precincts such as Northbridge, Vic Park, Thornlie and Morley and you’ll likely stumble across more regionally specific dining rooms and options beyond the above. Mei’s Noodles isn’t the sort of place eaters are likely to stumble on by accident, which is a shame.

Located in East Victoria Park’s industrial area, Mei’s Noodles serves the food of Yunnan, a diverse, land-locked region in China’s southwest that borders Vietnam, Laos and Myanmar. It’s also the region that Mei Shi, the restaurant’s owner, lived in before moving to Perth with her husband and restaurant co-owner, Michael Foster. Like any recently displaced ex-pat, she missed the tastes of home and quickly set about replicating familiar flavours.

“I’m [a] very picky [eater],” says Shi. “I always cooked dishes myself. If I didn’t know how to cook it, I’d call my family and asked them how to cook something the right way.”

After initially cooking just for her family, she started sharing her food with likeminded people, most notably fellow members of a Perth Chinese Mothers Facebook group who would meet for monthly picnics. From there, she established a catering business and cooked out of a hired commercial kitchen in the Swan Valley. In 2015, the opportunity to take over a former fish and chipper gave her access to her own kitchen and, most crucially, brought her closer to her customers. Shi figured people would still drop in and get takeaway. Instead, they began dining in and Shi and Foster found themselves as accidental restaurant owners.

Mei’s Noodles is the definition of a pragmatic, low-key dining space. Like the Chinese xiaochidian (snack bars) it’s modelled on, the decor plays second fiddle to the home-style cooking. Guests help themselves to their own chopsticks, soup ladles and plastic water glasses. Tables are set with chilli oil and one-ply napkins supplied by a nearby car service centre. Decorations are sparse, save for images of Lijiang – Shi’s photogenic hometown – that her husband thoughtfully printed and hung when she mentioned she missed home. Eaters’ first taste of Shi’s cooking may suddenly spark a newfound desire to visit – or at least find out more – about all things Yunnanese.

As mentioned previously, Yunnan is a diverse place. Not just in terms of diversity of landscape and climates – lakes, mountains, China’s largest tropical botanical garden – but also ethnic diversity with many different groups spread across Yunnan. Shi’s cooking is influenced by Lijiang and favours suan cai, a sour pickled mustard vegetable that Shi makes herself. One common thread throughout Yunnan, however, is an appreciation of rice noodles.

Mei’s Noodles serves two styles: “little pot rice noodles” and Yunnan’s famous signature, Crossing the Bridge noodles. The little pot noodles are served during the week and feature rice noodles in a gutsy pork and chicken broth and topped with vegetable and meat including pork, beef and chicken giblets. The Saturday-only Crossing the Bridge noodles – allegedly named after how a wife would bring her husband noodles in separate containers while he was studying – require a little more work from diners as the dish’s various components (roiling broth, meat slices, vegetables, noodles) are served separately and assembled by diners tableside.

Beyond the noodles, a small menu of side dishes is also available including various tripes bathed in chilli oil, house-made wontons and an intriguing chilli lemon chicken featuring shredded chicken meat mixed with lemon juice and incendiary bird’s eye chilli. Mei’s Noodles is also one of the few places I can think of serving Yunnanese lentil jelly: savoury, noodle-like strips of jelly made from lentil starch and served with chilli, garlic, sesame and all other manner of deliciousness.