How does the world’s favourite chef-rapper kick off his Australian tour? By free-diving for shellfish in Fremantle. 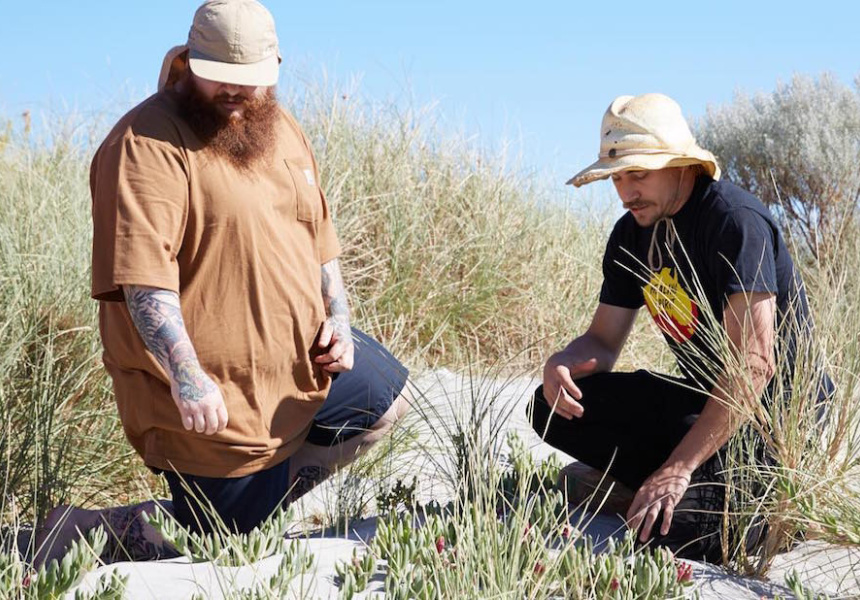 Chef. Online cooking show host. World-famous MC. No one could accuse hip-hop artist Action Bronson of following a conventional career path, which probably explains why the rapper (real name Arian Asllani) prefaced the start of his Australian tour by scrounging a Fremantle beach for wild things to eat.

Admittedly, Bronson was free-diving for razor clams and eating beach herbs while filming for his cult show Fuck, That’s Delicious, but that the thick-set, bushy-bearded New Yorker chose to shine the spotlight on native Australian ingredients speaks to a far-reaching interest in cuisine that’s not always there in food television (let alone food television hosted by hip-hop artists). And despite his time away from the world of commercial cooking, the former grill-master could still hold his own in the kitchen.

“I’d have him on my team for sure,” says Paul Iskov, a former Noma alumnus and one of the founders of Busselton-based native food pop-up, Fervor. Together with regular Fervor collaborator Matt Sartori, Iskov was tasked with introducing Bronson and his entourage to the pleasures of native Australian ingredients earlier this week.

“Matty got him onto slicing up some saltbush into a little chiffonade and I looked at his work and was like, yeah, that’s good. He’s passionate about food and straight away offered to get in there and help out how he could.”

Despite Bronson’s enthusiasm – not less than 10 minutes after emerging from the water, the rapper was eagerly extolling the joys of razor clams to a curious child that wandered up to him on the beach – most of his day was spent observing rather than doing. After introducing Bronson and his crew to coastal edible seaside plants including rosemary, beach mustard and pig face, team Fervor set up a rudimentary charcoal barbecue and began serving international visitors a series of distinctly West Australian ingredients.

Among the dishes prepared at this most Australian of barbies were chorizo made with emu meat; damper with smoked butter; raw Esperance scallops served with blood limes from Iskov’s own garden; and marron, the state’s native freshwater crayfish. (Iskov is almost certain he heard Bronson’s touring partner Mayhem freestyle about marron and razor clams during his set at the Perth show on Monday.)

The Munchies crew will be filming around Perth for a few more days before continuing on to the east coast. While we’ll have to wait for the finished episode of Fuck, That’s Delicious to get a true measure of Bronson’s thoughts on Perth’s food scene, Iskov believes exposing a young, global audience to Australia’s homegrown bounty can only be a positive for the indigenous food movement.

“It’s not just great for Fervor, it’s great for Western Australia and the Aboriginal people that have been using these native ingredients for 50,000 years,” says Iskov, who’s a long-time fan of the show.

“I hope people listen to the story and realise we should be using these ingredients in a respectful way and acknowledging their traditional owners.”