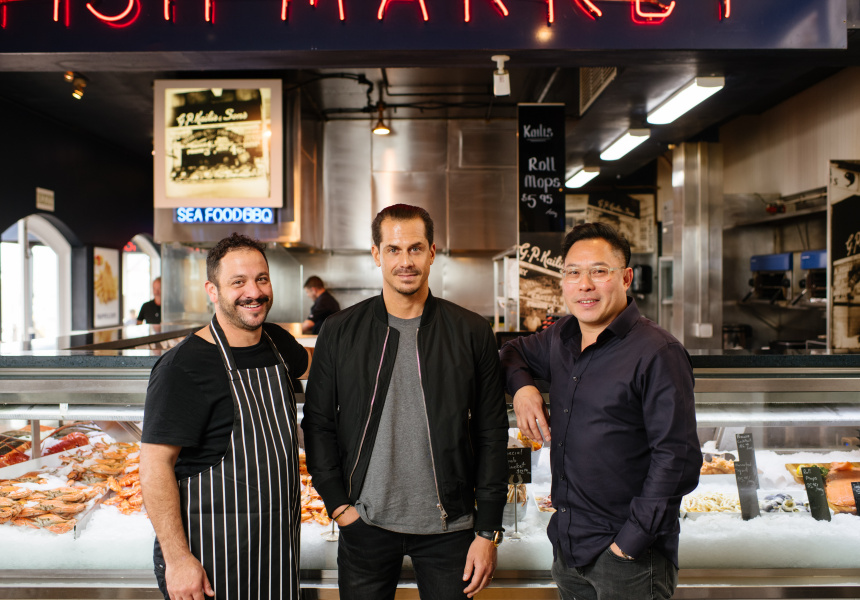 George Kailis was 12 when he first pulled on the gumboots at Kailis Fish Market Cafe, the restaurant his father Victor opened at Fremantle Fishing Boat Harbour in December 1986.

“I only started [working] so young because it was the only way that I could see my dad,” he says. “He worked so much.”

This September, Kailis writes the restaurant’s next chapter when unveils the new, updated Kailis Fish Market Cafe with dedicated fry, raw bar and barbecue sections together with bar and sweet sections.

“Times have changed as has the local hospitality scene,” says Kailis. “Kailis Freo is aging so it’s time to go to town on it. I love the business like a child so this is a very passionate project for me. We will be totally embracing the simplicity of who we are as a fish and chippery in a market style setting.”

Encouragingly, the new cafe will join the growing number of venues shining a light on traditionally underused, value-for-money species such as mullet, herring and garfish. The group’s processing area is located inside the harbour, ensuring the kitchen has access to fresh, well-handled seafood. The plan, according to Kailis, is to buy a market bin of something interesting each morning at market and serve it as a lunch special until sold out.

Renowned seafood chef Peter Manifis will oversee the food at the new Kailis Fish Market Cafe – promising news for those that remember Manifis’s South Perth seafood restaurant, InContro. Whiting, whitebait, sardines and fish wings – a once-discarded off-cut that’s now found favour among eaters and chefs – are among the things that will go into the fryer; prawns and lobsters will get a star turn on the barbecue; the raw bar will serve oysters, crudos, poke bowls and ceviches. Chowder will be served inside a sourdough roll, San Francisco-style, and the kitchen team are fine-tuning special dishes including a sea urchin waffle and raw seafood cocktail.

While the cooking will be updated, Kailis is looking backwards for design inspiration and describes the rebooted cafe’s aesthetic as “80s fish and chip shop meets New York City Jewish deli”. Paul Lim from Mata Design – the same studio that transformed Kailis at Trigg Beach into Island Market Trigg – is behind the makeover and insists the new space will be free of fishing nets, ropes and other tired seafood restaurant clichés.

Kailis Fish Market Cafe (46 Mews Rd, Fremantle) is due to reopen late September. The restaurant will trade as usual until September when it will close for renovations.