Nab a perch in this beautiful 120-person space and enjoy sharp drinks, comforting Mediterranean cooking and vistas of the Swan River. 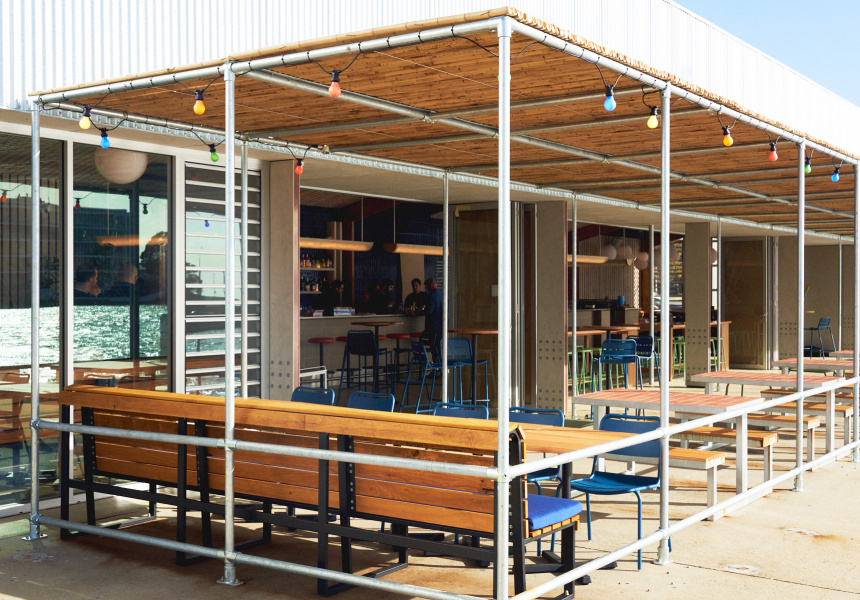 From behind, Jetty Bar & Eats looks like a heap of shed. Which is exactly the effect that owner Miles Hull was going for.

“The idea is to just be a really low-key shack on the water,” says Hull, a hospitality veteran whose track record includes Little Creatures and Alex Hotel, among many others. “Jetty might be inspired by those rough and tumble places in Greece on the islands, but I want it to really deliver great food alongside great cocktails and an awesome European wine list.”

Architect Michael Patroni of Space Agency and interior designer Kate Archibald have created a beautiful environment that complements and celebrates Jetty’s waterside location on East Fremantle’s East Street Jetty. Sharp design aside, the 120-person bar also has plenty of room, including a dog-friendly, bamboo-roofed outdoor area that will hum in summer.

Although Hull has drawn plenty of inspiration from low-key beachside eateries – our man cites a caravan in the Ionian Islands and Cottesloe’s legendary Van Eileen as two particularly influential memories – he’s pitching Jetty’s food and drink offering a little higher. Greek wines are a particular focus of the cellar while the mixed drinks keep things summery, light and Italianate.

Chef Marcello Segalina – once upon a time of Bistro Guillaume in Sydney – has written a similarly beachy menu that runs from house taramasalata and squid with ’nduja butter to fried school prawns and grilled sardines. A vertical rotisserie will supply chicken kebabs spiced with paprika and orange juice.

“I would say the menu is fusion Mediterranean cuisine, but fusion in the sense that it goes from Portugal right down to the coast of Turkey,” says Segalina, a product of Italy’s Modena region, the home of Ferrari, Parmigiano-Reggiano cheese and chef Massimo Bottura.

Although the Mediterranean Sea is a recurring theme at Jetty, management hopes the project makes people rethink the Swan River.

“Perth is lacking quality venues on the water,” says Hull. “You’ve got a few touristy cases which are great for views, but ultimately, it has to be about the quality of food and drinks.”