How Does the Ramen at Hakata Gensuke Rate? 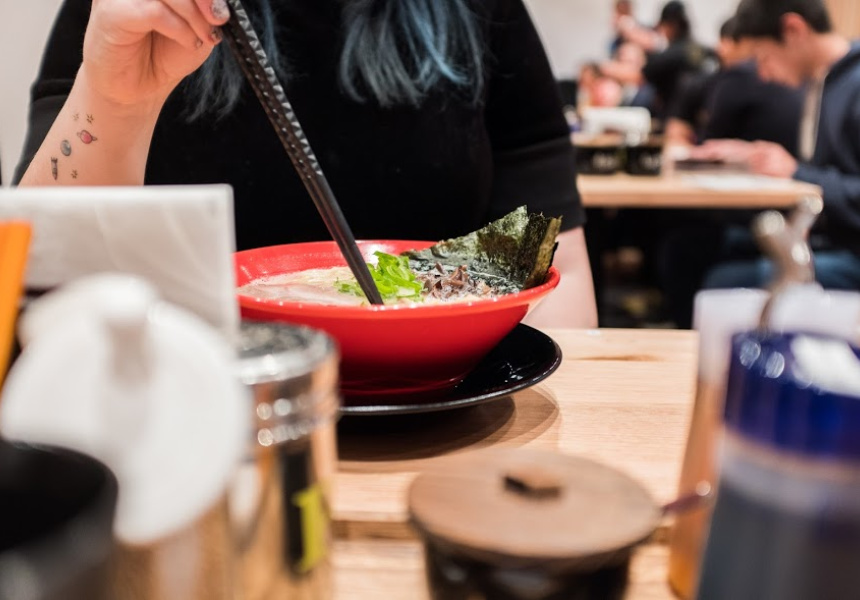 “You enjoy the noodles more when you slurp.”

That’s the advice from Sean Tan, executive operating office of Hakata Gensuke Australia. The first diners at Victoria Park’s Hakata Gensuke clearly agree, if the racket is anything to go by. As someone that’s overseen four successful Hakata Gensuke openings in Victoria, Tan has seen – or should we say heard – countless bowls of tonkotsu ramen being consumed. The fifth, in Victoria Park, is Western Australia’s first. Tan is hoping for a similar response to Melbourne’s outposts.

“We still get three hour queues in Melbourne,” says Tan. “People camp outside the store from 8:30am.”

If that trend continues, the queues for Hakata Gensuke may well wind past its competitors. Jaclyn Wong, who co-owns Hakata Gensuke with husband Jason Lau, is aware of this, but is confident.

“Yes, there are a few around, but we think we’ve raised the bar,” she says. “We’re confident we’re the best.”

Being the best means putting the best in the kitchen. In this case, that means Syota Okayama. Syota-san trained for eight years under Hakata Gensuke founder Kousuke Yoshimura and has trained chefs in every Hakata Gensuke across Australia. When it comes to service, the quiet chef elects to let the ramen do the talking.

The menu features four core options: signature, black, shio and God Fire. Each starts with Hakata Gensuke’s tonkotsu broth, a pork-heavy stock based on a secret recipe of pig bones simmered for 12 hours. The signature tonkotsu is a chance to taste that soup as is with nothing added but a generous mound of noodles, black fungus, spring onion and a thick slice of chashu (braised pork). The black tonkotsu sees a fried garlic and black sesame paste used to trick up the broth while shio – the bowls feature a thinner broth and bamboo shoots used in place of black fungus – offers a lighter take on the house speciality.

Then there’s the God Fire. While the standard-issue version is available in four different levels of chilli, the brave can make theirs hotter with heat levels up to 20 available.

Capsaicin thrills aside , boiled eggs, bean shoots, cabbage and seaweed can be added to any bowl for an additional fee while noodles can be cooked for more or less time depending on the desired texture. Noodle refills are $2, meaning those who are somehow still hungry after one bowl can do it all again with whatever broth they have left.

Offering 20 levels of God Fire isn’t the only way Hakata Gensuke deviates from tradition. Chashu is taken from pork shoulder rather than belly and is marinated in another Hakata Gensuke secret sauce. The result is slices of pork that feature addition chew without sacirifcing any of the joys that come with jellified fat. All pork is sourced locally and, according to the owners, everything is sourced from Western Australia other than the soy sauce and noodles.

The soy sauce is a secret brand from Japan and is integral to Hakata Gensuke’s broth. The noodles, meanwhile, are made in Melbourne and shipped to Perth: a decision, according to Tan, that has been with quality to the fore. “We want the noodles to be consistent,” he says. “If we open a second store in WA, then we’ll think about getting the equipment we need.”

In addition to noodles, chicken karaage, pork gyoza and slow-cooked eggs with chashu are available on the side.