Brothers Matt and Tom Shaw head south of the river for their third burger joint. Slide into a booth for American-style burgs, golden chicken tenders and, soon, low-intervention wines and Dingo Lager on-tap. 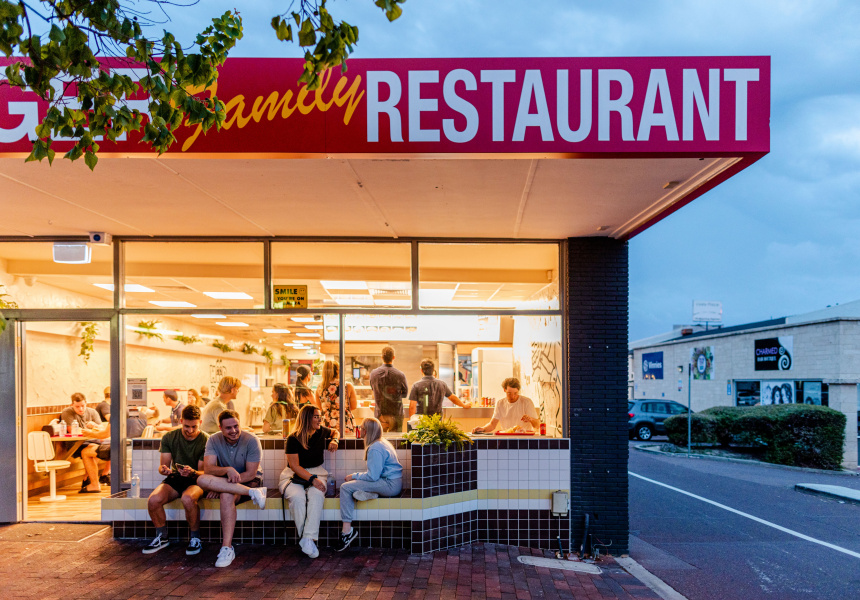 Hoodburger sits alongside Short Order, Royal’s and Meet & Bun as one of Perth’s great burger success stories. Brothers Matt and Tom Shaw launched the brand as a pop-up in 2015, cooking burgers in laneways and outside bars and clubs, before opening permanent spots in Northbridge and Inglewood. Now, they’ve opened a third – this time, south of the river in Ardross.

“We’ve always wanted to move south of the river,” says Matt. “It’s a big step up for us. We basically just built our dream shop. Everything is custom, it’s the nicest kitchen we’ve ever had. It’s our flagship store and everything we do from here will be measured against it.”

The new 50-seat venue was built from scratch in the gutted shell of a Crust Pizza and matches the 80s diner-style red and white fit-out of the Inglewood store. Outdoor seating will be added in the future.

Chicken tenders, in original and spicy variants, are also available as sides. Fries come in substantial servings, a worthy vehicle for the wide selection of sauces available from honey mustard to reaper ketchup.

The restaurant’s liquor license is still in progress. When it arrives, you can expect a selection of local, largely low-intervention wines, and Dingo Lager served on-tap. The imported American soft drinks available in the other restaurants – think Dr Pepper, root beer and Arizona iced tea – are also here.

The new store has already proved a hit with locals. So much so the brothers are planning to open a fourth store later in the year.