We squeeze into the kitchens of the Food Truck Rumble to talk about the realities of running tucker from a truck. Christos Marinakos begins his working day at four every morning. Once the chef at legendary Northbridge kebab store, Plaka, he now toils alongside sons George and Jim at George’s Kebabs, the popular takeaway joint the family opened at Curtin University in 1993. Operating out of a kitchen only slightly larger than a queen-size bed, the cooking journeyman sets about preparing the day’s food.

George’s Kebabs is one of 40 trucks appearing at this year’s Food Truck Rumble at the Perth Cultural Centre. What started in 2014 as a blue-sky idea and 16 trucks has snowballed into a day-long party involving a craft market, local bands, DJs, breakdancing battles, an urban hawker market and activating new spaces in the soon-to-be-demolished Museum Gardens. For a vendor such as Marinakos, it’s a great excuse to hit the road and feed new faces.

While Marinakos’ prep list changes from day to day, some things are constants. The 50 kilograms of chicken that needs to be cooked daily. An equivalent quantity of lamb (although he likes to do that every second day, albeit in larger quantities, to help break up his routine). The 12 litres of garlic sauce that staff squeeze into pillow souvlakis through the day.

As most Curtin students will attest, the family’s kebab store inside the tavern is wildly popular, but since joining the food truck game (the Marinakos family launched Greek Streats in May) things have gotten a little crazy. And unpredictable.

“We were never this busy before,” says George. “With the shop, you have a rough idea of what every day is going to be like, but with a food truck, anything could happen.”

And it very often does. Some days it’s not being able to find staff. Other days it’ll be rocking up to a festival to find the promised crowd of 2000 turns out to be just 200. Sometimes it’ll be the other way around. And that’s before you factor in the logistical challenges of operating in a cramped mobile kitchen with limited storage capacity. In short, operating a food truck isn’t the sort of business someone gets into to turn a fast buck.

This is, of course, not to trivialise the challenges faced by the owners of restaurants, cafes, bars and any other brick-and-mortar businesses. But considering the underlying (and growing) animosity directed towards mobile food vendors by some sectors of the hospitality industry, it’s worth putting the food truck effect in context.

Firstly, food trucks have significantly shortened the odds of being able to get something good to eat at a festival, concert and all manner of outdoor event. Secondly, a steady rise in food truck sightings in otherwise underutilised areas – the Under the Bridge Food Trucks in East Freo, say, or those trucks that set up in Como on that patch of grass next to the freeway on Sundays – proves more and more food truck operators are going into areas not already serviced by other vendors. And finally, the cuisine offered by some of these trucks has really improved of late, with vendors offering more than just ho-hum pastiches of on-trend dishes.

While food truck numbers have gradually been increasing over the past few years – many point to Jumplings and Comida do Sul as some of the pioneers of the current wave – it’s hard to say exactly how many new players have come on to the scene. Also: what constitutes a food truck? Do we include coffee vans and Mr Whippys as part of our stats? As if that wasn’t complicated enough, food trucks are required to apply for a permit in every council they want to operate – often on a per-event or appearance basis – with each council having its own set of food-truck by-laws.

Operators can expect to spend six figures on setting up a vehicle from scratch, or five figures on vans and trucks that have already been kitted out with a kitchen. Only once that’s completed can food trucks then hit the road and start building a name and customer base.

It’s not just the vendors putting in the hard yards. Ai-Ling Truong, the one-woman army behind Food Truck Rumble, began planning for this year’s significantly larger event six months ago and has taken four weeks of annual leave in the lead-up to the big day. The most impressive statistic, however, is that Truong and her volunteers run Rumble as a not-for-profit event with all the money raised going towards covering the event’s $75,000 running cost.

“The whole food truck revolution that started in the US was all about pushing the boundaries of gourmet food,” says Truong. “If you don’t come at it with that kind of viewpoint, then you’re not going to be good and people are going to see through it. With running the event as a not-for-profit, I’m keeping the integrity and feel of the event. I make all the curating decisions independently and I’m not being driven by other motives. Over time, I’m evolving the event to feature other elements as I really want to share Perth’s underground culture, music and arts, to provide a platform for people that don’t normally get an opportunity to engage with large audiences and also expose the public to new things.”

Food Truck Rumble is at the Perth Cultural Centre on April 3. Broadsheet is a media partner of this year’s event. 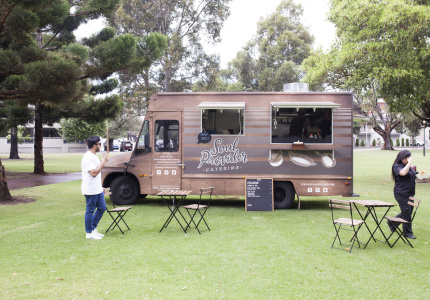