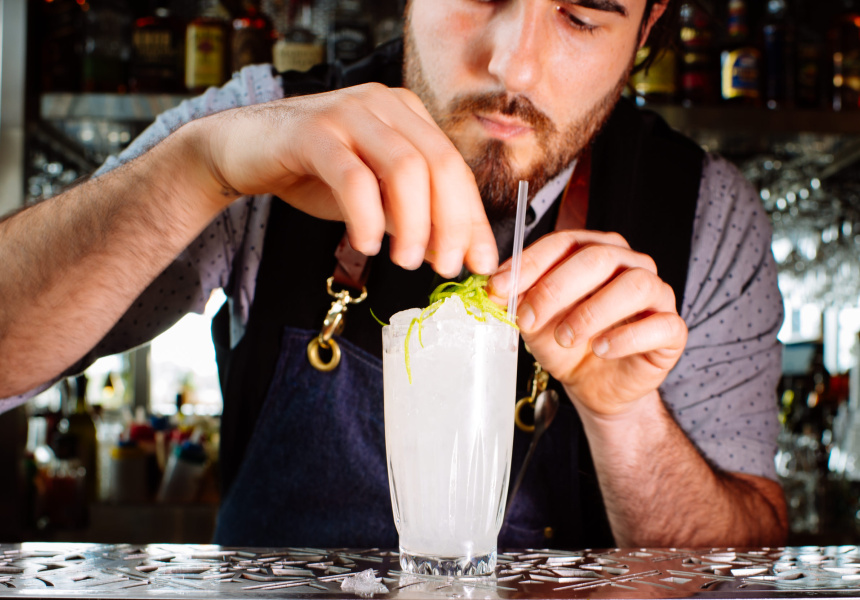 Ben Tua has spent his fair share of time in bars, as both bartender and customer. Unsurprisingly, he’s developed a deep working knowledge of mixed drinks that covers everything from Sazeracs, Negronis, Old-Fashioneds and other classics, to cocktail arcana gleaned from watering holes around the planet. It’s the latter that truly informs the drinks list at Sweetwater Rooftop Bar, the shiny new East Fremantle venue Tua is managing. Like all good bartenders, Tua and the rest of his team will gladly make guests their favourite classic, but they’re really hoping drinkers will embrace the focus on cocktails less-ordered.

“These drinks are all incredible, but for one reason or another, they never had their day,” says Tua of the bar’s opening 30-drink list. “Lots of things make a classic, like having a super-catchy name or someone famous drinking it. The martini isn’t the best tasting drink, but everyone knows it because of James Bond. These drinks didn’t get that opportunity.”

While drinkers will have to wait until September for the launch of the bar’s original cocktail creations (Tua: “house-made syrups, fresh ingredients and Sweetwater making its mark”), the following five drinks paint a very clear picture of why Tua and the rest of the Sweetwater team might just be the best thing to happen to cocktails south-of-the-river. Coupled with great views and modern Asian share-plates from ex-Gingerboy head chef Leigh Power, you're looking at a compelling reason to visit East Freo.

Gin Smash
“On paper, it’s quite an assuming drink,” Tua says. “You look at it and go, ‘it’s just four ingredients, it’s a gin sour with basil. Whatever.’ But when you taste it, woah. It’s refreshing, it’s herbaceous, you can have more than one. It’s such a good, well-balanced drink. It was only created in 2008 at Le Lion in Hamburg so hasn’t been around long. They created it as a throwaway drink and then it went massive, not just in Hamburg, but all across Germany. We call it the Gin Smash on our list, but you might see it on lists around the world as the Gin Basil Smash or Basil Smash.”

Hotel Nacional
“This is the signature drink of the Hotel Nacional in Havana, which is where the Rat Pack used to hang out. It’s a simple twist on the Daiquiri: instead of sugar, you’ve got apricot brandy and a backbone of fresh pineapple juice. We use freshly cold-pressed pineapple juice in this drink. It’s really important to only use juice that’s all fresh. No manufactured juices are allowed on premise. It’s all fresh.”

Chicago Fizz
“Berroca wasn’t around in the 1920s, so if you had to cure a hangover, you’d wake up and have a fizz. A fizz is anything that’s shaken with lemon juice, sugar and no ice. There’s a lot of fizzes around the world. New Orleans has the Ramos. London has the gin fizz. This is Chicago’s twist on a classic fizz, made with ruby port and rum. It’s a cracking drink. It tastes like you’re drinking chocolate milk.”

Gin Rickey
“This is the precursor to the vodka lime soda and Washington’s gift to the world of classic cocktails. If you’re not into sweet cocktails but want something refreshing, this is your answer. Ours is made with gin and lime built over crushed ice and topped with a little bit of ginger beer. It’s bone dry. The drink’s creator, Colonel Joe Rickey, took an ad out in the local Washington post saying that if you drank a Gin Rickey, it cooled the blood. The drink went viral, or at least, old-school viral.”

Chartreuse Swizzle
“I had this at Death & Co in New York and it was an amazing drink – it’s the Oliver Twist of cocktails. Chartreuse can be quite a lot to take on, especially for someone who’s not used to it. Something about the Chartreuse Swizzle tones down that fight. You’re taking a ruffian off the streets and you dress him up all nicely and get the best out of him. It presents Chartreuse how it should be. It’s floral, vegetal and it’s got so much depth. The nutmeg and mint garnish reinforces the drink’s freshness.”