Indigenous ingredients. Otherworldly settings. A deep connection to country. All are integral to Fervor, the West Australian native food pop-up that has been thrilling diners since 2013. To mark the release of Fervor chef and founder Paul “Yoda” Iskov’s first cookbook, Broadsheet Perth editor Max Veenhuyzen reflects on one of Australia’s most important food stories. 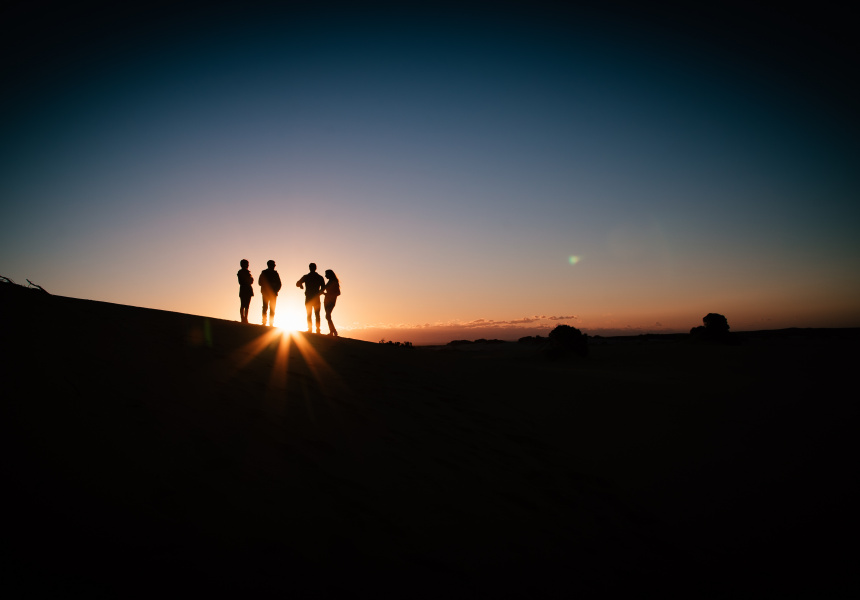 Fervor is a West Australian cookbook that’s been 60,000 years in the making.

I’ve known Yoda for about eight years. Although I originally met him in 2010 while he was part of the kitchen team at Restaurant Amuse, it wasn’t till the following year that I got to know him better after he and fellow Amuse brigade member Gianfranco Monti helped shuck oysters at a wine tasting I’d organised. Fast forward to 2013 and I heard about a pop-up dinner Yoda was doing in Margaret River. By the grace of the fates, dinner was the day before I was going down to Pemberton to help some friends with vintage, so adding a night in Margies en route was no big deal. A couple of friends and I went not knowing what to expect. The food at Amuse, naturally, was very good, and I’d heard Yoda had just come back from a year travelling the world and cooking at kitchens such as Noma in Copenhagen and DOM in Sao Paolo, so I probably wasn’t going to just get a toasted sandwich with ants on it. (Or maybe I would, but it would likely be a really, really good toasted sandwich with ants on it.)

The dinner was also my first visit to Fair Harvest, an inspiring permaculture farm about 10 minutes outside of the Margaret River township. We’re directed to this wooden shed that’s beautifully set with candles, native plants and a giant communal table. Yoda and some other chefs – mostly from the Amuse brigade that drove straight down after Saturday service – were cooking and plating dishes nearby. And we were served very, very delicious things. Marron. Lamb breast. Raw-milk ice-cream churned to order. Lerp, a sweet ant secretion I haven’t had since. My first taste of that addictive Fervor damper and butter. It was, one hundred per cent, a defining meal, not just for me, but for everyone there, and I think food history in this state.

Since then, I’ve watched Fervor grow as Yoda and his team have taken their roving pop-up around Western Australia and beyond. I’ve also enjoyed seeing him on TV, whether that be on the Noma Australia documentary series or alongside American rapper Action Bronson cooking marron on the beach and gathering wild seafood. While I love attending Fervor as a guest, I’ve been fortunate to get a close-up view of the Fervor machine, too. Helping with pack downs. Hosting dinners. Even getting in the kitchen. I’ve stayed with the team in dongas in the middle of the bush and crashed in guest bedrooms. I’ve sat in almost horizontal rain with the guys trying to load trestle tables on top of a trailer, and it’s hard yakka. After an hour, my white-collar hands and heart were broken. For team Fervor, this has been par for course for five years now.

Yoda also has respect from the Indigenous communities he spends time with. We live in an age where the awareness surrounding native foods is growing. Plenty of chefs are using it, but Yoda and the Fervor team are some of the few that do it with sincerity. He doesn’t just order things online and wait by the mailbox, he spends time on country, learning from traditional landowners, being part of communities and then sharing that knowledge with us. He gives and doesn’t just take.

Food, naturally, is a big part of the Fervor story, but it’s also worth acknowledging Fervor is also about a culture: a culture that’s one of the world’s oldest that’s still relevant in the age of Tinder and Uber. Yoda’s new cookbook sits in that special place where culture and food meet, but it isn’t just a book. Used in the right way, it can also help us heal some of the many, many wrongs that have taken place since European settlement. The late Nigerian novelist Chinua Achebe, the author of Things Fall Apart, once said: “Until the lions have their own historians, the history of the hunt will always glorify the hunter.” Books like this give the lions of Indigenous Australia a voice. We live in an age where people shamelessly spread hate and misinformation. Where leaders lack the backbone to do what’s right. Reconnecting with Australia’s first peoples is one way we can quietly – or not so quietly – fight back.

On the topic of quietly going about our business, I think another reason Yoda is so respected is because of his intense humility. You see chefs on social media go on about fake modesty, but Yoda is the real deal. He’s too busy walking the walk – or gathering the sugar ants, the Kakadu plums, the grey saltbush – to post the post about where he is. This is where we come in. It’s up to us to champion this great West Australian project. To buy the books. To give them to people as Christmas presents. To attend the dinners. It confuses me that people save their pennies for plane tickets and hotels and dinner at big-name Michelin-starred and 50 Best restaurants, but balk at spending that same money in their own backyard and having a truly world-class experience.

While much of this conversation has been about Yoda, I’d also like to acknowledge the contributions made by other key players in the Fervor story. First, there’s Bree Iskov, Yoda’s sister who helped plant the seeds for Fervor in 2012 at the tail end of her brother’s year spent backpacking around the world. I’d also like to single out Yoda and Bree’s mother Jenny Iskov for her unwavering support over the years. Both your kids are a credit to you and your late husband Chris.

Then there’s Rohan Park, a chef and ramen enthusiast that has been part of the Fervor story for the past couple of years. I’m pretty sure Rohan doesn’t have an official title – sous chef feels like I’d be underselling his contribution – but he’s a vital cog in the Fervor machine.

Finally, there’s Steph Pronk, Yoda’s life and business partner. Although she was still in South Africa for the first events, she’s been at every one since. She’s organised. She’s focussed. She’s unflappable. She’s funny and her sense of timing with one-liners is superb. But more than that, she’s kind, warm-hearted and generous. Without her, the wheels on the Fervor bus wouldn’t go round and round, or as far. She is, I think it’s fair to say, the matriarch of the Fervor family.

I spoke about family at the start and I’d like to end talking about family. Specifically, the extended Fervor family: a family that doesn’t just include the chefs and wait staff that work each dinner, but the Indigenous communities that share their knowledge and land with us. The farmers that answer bat signals and rummage through sheds for lighting, spare gas cylinders and other essentials a chef might need to host a remote dinner under the stars. The friends that muck in to take photos and wash dishes. But perhaps most importantly, are those that support Fervor’s work. The guests that dine at a Fervor event. The guests that forward newsletters to friends and tag others in social media posts. That attend book launches.

Congratulations Paul, Chris, Rob, Jane and everyone involved with the book. It’s a beauty and an important release – not just for Fervor, not just for food people, but for all of Australia. It doesn’t just tell the story of an important family; it’s also going to be an important tool in helping build that family. Thanks for welcoming me into the family.

The above is an edited version of a speech made at the Perth launch of Fervor held at The Centre For Stories on Friday November 9.