Faust To Be Reckoned With 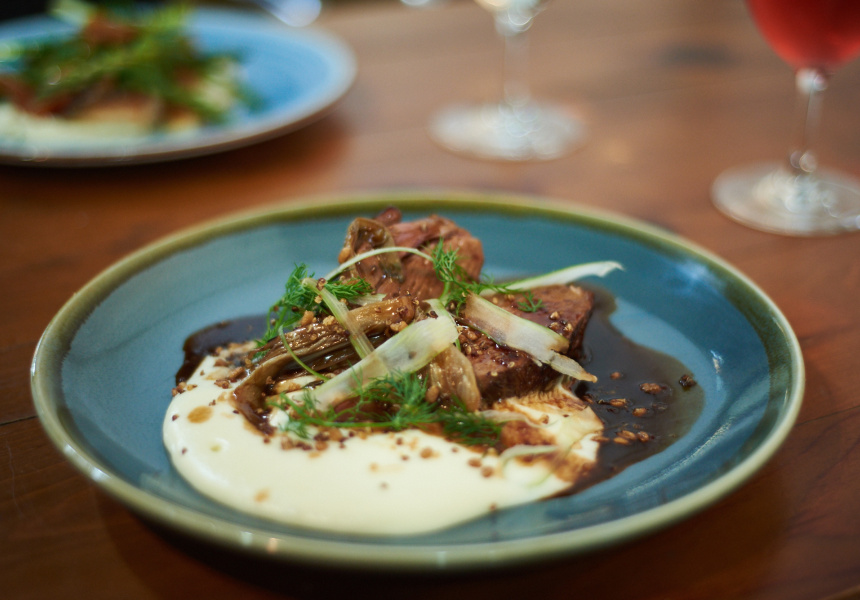 “You have to serve pizza.”

“I am not serving pizza,” was Herb Faust’s reply to his wife Deanna.

When his catering company Herb Faust Food took over the contract to run the cafe at the Swan Valley’s 180-year-old Houghton Winery, he was determined to steer clear from generic food.

Although Faust has had the contract since July, phasing out the existing menu was a gradual process. According to Faust, the cafe has only hit its stride in the last couple of months.

“The challenge was the clientele and what they were used to,” says Faust. “There has been backlash. People were upset there is no pizza anymore and stuff like that. My thought process is that there are plenty of places to get pizza in the Swan Valley. We want to bring something different that is fresh, good quality and reasonably priced.”

The current menu has little in common with the one Faust inherited. Expect distinctly un-cafe dishes such as savoury churros with jamon, caramelised pear and Cambray blue cheese; Margaret River wagyu with green mango, crisp fish and hot and sour sauce, and fritters of queso Mahon (a Spanish cows cheese) with charred corn, avocado and jalapeno mojo. On the dessert menu, the rose and chestnut features a curd made using verdelho juice pressed in the winery (the juice is also used in dressings). Dishes change seasonally but count on West Australian produce to feature prominently.

Giving Houghton a solid profile for food was important to Faust. He wanted the menu to reflect what he had learned over the past six years running his boutique catering business, which helped Faust define his own food identity: fresh, clean flavours and a tip of the hat to his Thai background.

“Before I started catering I had no idea what food I wanted to cook or liked to cook,” says Faust who trained under Aaron Carr (of Margaret River’s Vasse Felix) at Wildwood Brasserie in Yallingup. “I didn’t have a passion.”

In 2010, while working at Scotch College cooking for the school’s boarders, Faust was approached to audition for Iron Chef Australia and joined contestants such as Dan Hong and Matt Stone in cooking against Iron Chefs Guillaume Brahimi, Guy Grossi and Neil Perry. Faust was the only contestant that won his bout.

“That was a flash-in-the-pan experience,” says Faust who beat Grossi in a lamb cook-off. “I became the token story, ‘the high school cook’. I was very lucky that I got some great promotion after that.” Keeping things light and avoiding butter and cream is a key part of Faust’s playbook. Instead of a creamy blue-cheese sauce, he makes a lighter, labne-style alternative using cauliflower, Cambray blue cheese and yoghurt. This is also a win for gluten-free diners.

“There isn’t a lot of gluten or potato on the menu, so you could have three courses and not roll out of here,” he says.

Picnic boxes are also available from the cafe. The entire grounds are licensed, so wine can be purchased at the cellar door and customers can set up camp under the old Jacarandas or Norfolk Pines to dine and drink.

The Swan Valley is Australia’s first humane food region, where accredited restaurants commit to serving humane food such as free-range eggs and meat. Faust is now working with the City of Swan to have Houghton added to the list.