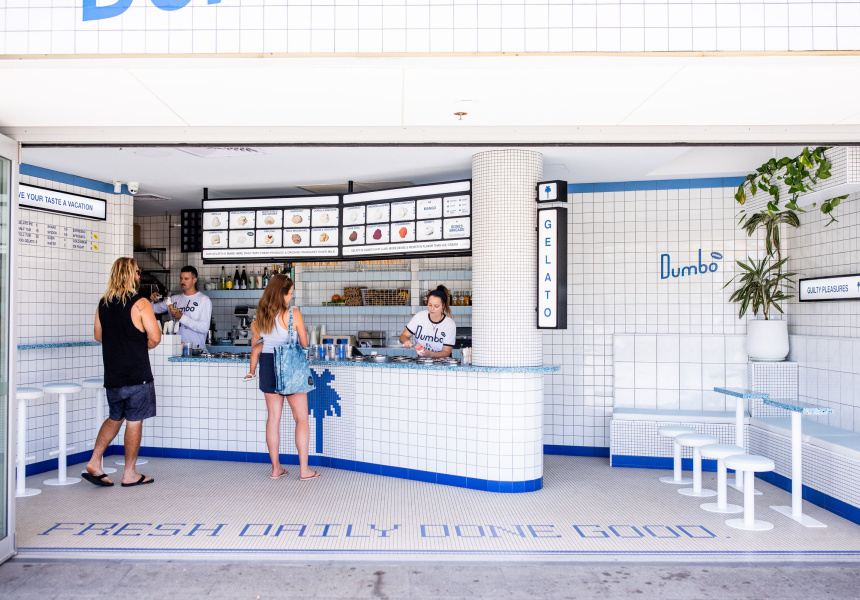 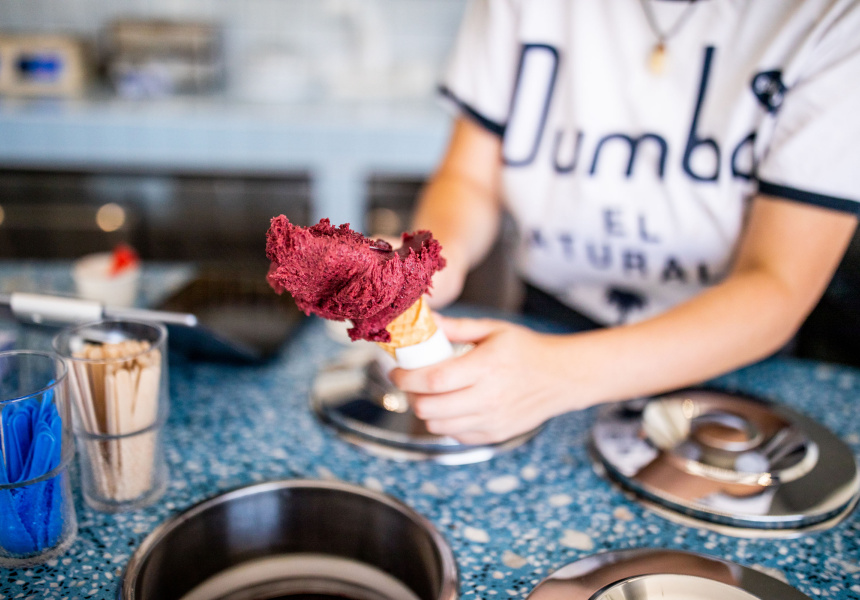 Cheese and vegemite. Milo milkshake. Lamington. Somewhere in Italy, gelato purists are rolling over in their pozetti gelato cannisters, cursing Australians for their cavalier attitude towards one of their sacred food stuffs. But for Kane Hipper and Stevie Gale, the brother-and-sister team behind Scarborough’s Dumbo Gelato, these flavours are edible memories of their childhood in Geraldton.

“We recognise that we’re not Italian but have English and Irish heritage,” says Hipper. “Our Aussie upbringing meant the desserts we grew up with were scones with jam and whipped cream, spoons of milo with a glass of milk when mum had gone to bed, and rice cream that dad used to smash out of the can with tinned peaches. They’re the sorts of things that we’ve incorporated into our menu.”

Although there’s a distinct Aussie twang to this six-week-old gelateria, Hipper and Gale are also paying the utmost respect to Italy. Those aforementioned pozetti, for instance – airtight, cool and dark – are used to store the gelato and keep each flavour fresher for longer. Look closely and you’ll find classic Italian flavours – pistachio made with Sicilian produce and hazelnut made with nuts from Piedmont – hidden among the more creative conconctions, such as Margarita- and limoncello spritz-flavoured gelato. But most tellingly, Hipper and Gale spent three weeks studying at the Carpigiani Gelato University in Bologna earlier this year (other Perth alum include Chez and Carly Bartolo from [Chicho Gelato] and Sean Lee of Gusto Gelato). While the siblings say they enjoyed spending so much time with one another, university was more work than play.

“We definitely went in a little bit blind thinking it would be a lot of fun, but it was a lot of work,” says Gale, a former medical admin worker who switched careers to become a full-time gelato maker. “It was a lot more maths and science based than we thought. We were at home in our apartment in Bologna every night doing homework.”

The number crunching, it would appear, has paid off. From the traditional milky varieties through to the water-based sorbets (because we’re talking Italian frozen treats, say “sore-bet” rather than the French “sore-bay”), creaminess and high-definition flavours are par for the course. While the milk is organic and comes from Margaret River Dairy (Hipper: “It’s a little more expensive but it’s worth it”), half the range is vegan – including a riff on the world’s greatest chocolate bar, Bounty. As evinced by the use of Italian pistachios and hazelnuts, team Dumbo seek out top-shelf ingredients. Among the things you’ll find in their shopping basket: chocolate from Margaret River bean-to-bar chocolatiers Bahen & Co and seasonal fruit – mulberries and watermelon, say, from their family’s farm.

Gelato and sorbet is available in cups, cones, take-home containers and – most dangerous of all – a baked-to-order brioche “pie” that entombs desserts in a hot, crisp and buttery pastry shell. Although Hipper, Gale and their parents are the majority partners in Dumbo, the team from Floreat cafe Someday Coffee Co are also involved and are overseeing the coffee offering. James Pedlow and Riley Younger, Hipper's partners in El Grotto and Si Paradiso, are also part of the venture.

The beach-facing open shopfront on the Esplanade feels summery as. Blue and white tiles conjure fantasies of Greek islands, getting around in sandals and stretching out by the water.

To celebrate its opening, Dumbo Gelato is giving away free gelato and gelato pies on Sunday December 1. See Facebook for more details. 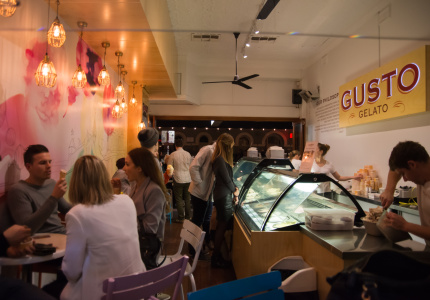