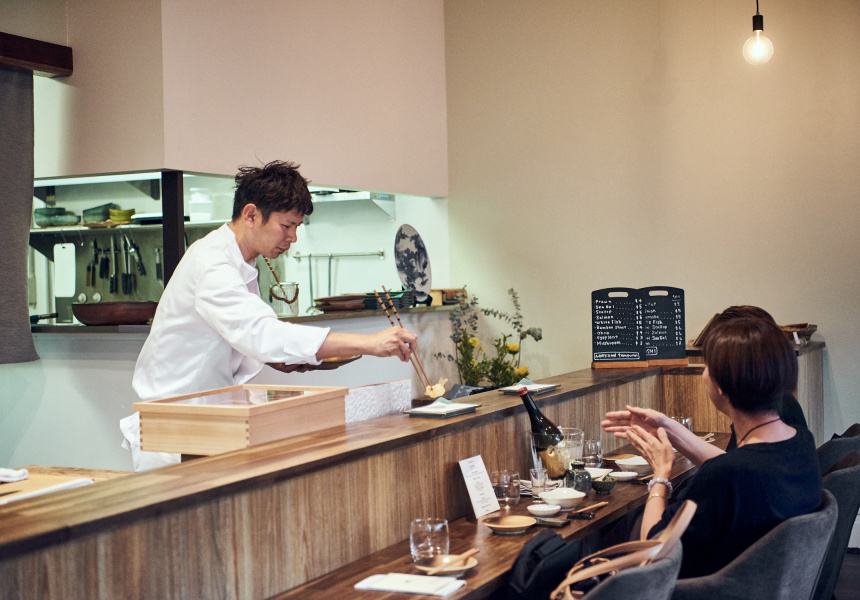 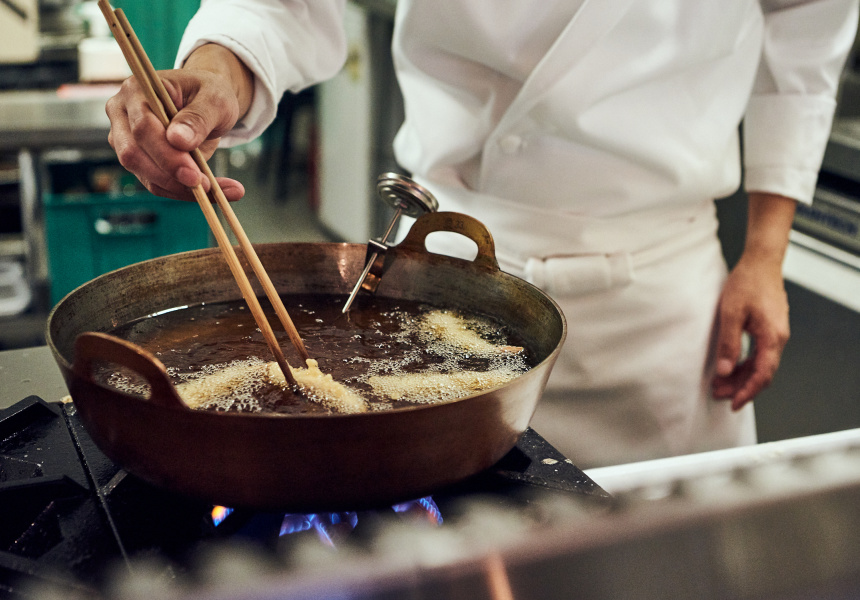 The city of Akashi, it has to be said, doesn’t enjoy the same attention as Japanese hotspots such as Tokyo, Kyoto or Sapporo.

Found in the southern Hyogo prefecture near Kobe, the city – estimated population around 300,000 – is home to the Akashi Kaikyo Bridge, the world’s longest suspension bridge; the headquarters of leading global scale manufacturer, Yamato Scale; and akashiyaki, a regional style of takoyaki (fried octopus balls) where the balls are dipped in soup before being eaten. As of late November, the city now has a Perth connection: enter Dining Akashi, an intimate 14-seat restaurant specialising in tempura, battered and deep-fried seafood and vegetables.

Dining Akashi is owned and operated by wife and husband team Miki and Makoto Mitani, restaurant manager and chef, respectively. A native of Akashi, Makoto’s early experience included time at a hot spring ryokan (Japanese inn) in Kobe as well as a specialist sushi restaurant in Akashi where, among other things, guests chose live fish from a pond and Makoto and his team would prepare them as startlingly fresh sashimi. His previous Perth postings include sashimi chef at the Boatshed Market; the sushi counter at heavyweight izakaya James Parker, and Mount Hawthorn’s Ha-Lu, which is where he met Miki.

If Makoto-san’s CV is extensive, the BYO restaurant he and Miki opened is anything but. As the seating capacity suggests, Dining Akashi isn’t a big place. The first thing you see when you enter the former cafe is the six-seat chef’s counter. Eight more guests can be accommodated at tables throughout the sparsely decorated space but – in Japanese dining tradition – the best seats are right with the person cooking dinner. An all-jazz soundtrack helps counter the roar of the Canning Highway traffic.

Although Akashi offers a la carte lunch, evenings are prime time because the restaurant offers two set menus: Otegaru ($50) – various appetisers, tempura and sides – or Akashi ($75); the same menu as Otegaru with additional sashimi and tempura plus a dessert (a green matcha pudding, say). If you can, budget the additional money and time for the latter.

Although tempura might be one of the better-known exponents of Japanese cuisine – tempura prawn and fish are mainstays on the menus of most food court Japanese eateries – Makoto takes his frying duties more seriously than most.

He fries using Taihaku, a cold-pressed white sesame oil notable for its fragrance and high smoke point (invaluable when deep-frying). The house tentsuyu – tempura dipping sauce – is served warm and alongside a house-made salt gently fizzing with crushed sansho pepper, a relative of the Sichuan peppercorn. Most vitally, though, all the tempura is served piece-by-piece, hot from the oil. Once the diner finishes their tempura, Makoto (he’s the only chef) fries the next piece.

“We wanted to offer authentic Japanese tempura where guests are served items fresh, hot and crisp,” he says. “We only do set menu. There aren’t many places like this in Perth specialising in tempura so we decided to open somewhere that did.”

While the golden tempura is worthy of its star billing (on a recent outing, deep-fried local sand whiting, Shark Bay tiger prawns and goldband snapper all featured: hungry and/or greedy guests have the option of ordering additional tempura by the piece), the rest of the menu is no afterthought. Dishes rotate each month, but if January’s soba and cold dashi jelly appetiser or a restorative hashiyasume (literally, “to rest your chopsticks” – a sort-of bridging dish between courses) of pickled spaghetti squash, cucumbers and skinned cherry tomatoes were ever to resurface on future menus, I’d be happy. Then there’s our man’s curry, all long-simmered Wagyu beef and cinnamon and ginger spice and a five-mouthful bowl of comfort, happiness and gentle inventiveness.

“I’m always trying to be inventive and creative, but follow the traditional skills that I learned,” says Makoto.

So far, so very good. And as to the future?

“I don’t think there is a goal for Dining Akashi,” he says. “We just want to see customers happy and enjoying real Japanese food. After all, there’s no limit for happiness, right?”

This article first appeared on Broadsheet on January 28, 2019. Menu items may have changed since publication.