“Hopefully we’ve laid the groundwork for anyone else to open a wine store without going through the same bureaucracy we have.” 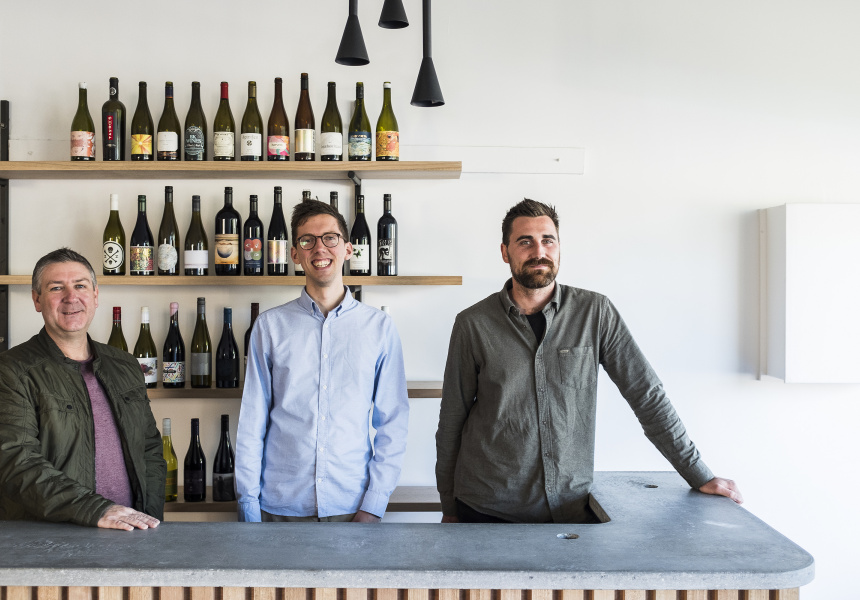 When word got out that Commune Wine Store had its initial liquor application knocked back in May, drinkers and producers quickly rallied behind Peter Baker, Chris Ford and Paul Heatley, owners of the (would-be) Maylands boutique bottle shop.

Four months (and more than 1400 online questionnaire responses and letters of support – some from as far away as Tasmania) later, the Department of Racing, Gaming and Liquor (RGL) has come to the party and given Commune the green light to open.

“Elation, euphoria, a palpable feeling of relief: it’s hard to describe everything we felt when we got that email,” says Baker of learning their appeal against RGL’s original decision was successful.

After taking a night off to celebrate the good news, Commune’s owners are now focusing on getting the store ready for its opening next month. The former clothing boutique has been divided into three rooms, and the plan is to activate each of these spaces in stages (appealing government licensing decisions, it turns out, is an expensive exercise). Thankfully, the first area to open will be the main room, the biggest of the three.

Wine-wise, the opening range will hover around the 600-bottle mark and include wines from Japan, Slovakia and other countries and regions not commonly represented on bottle shop shelves. The store will be just as committed to local producers and will always have at least 100 West Australian bottles on its shelves. Plans are also afoot to produce house wines in vintage 2021 using grapes grown in the Swan Valley, Margaret River and Great Southern. In short: wine is the name of Commune’s game.

“We want this to be the flagship bottle shop in Perth,” says Ford. “We want to support grassroots winemakers and people doing good things with wine, as well as push the message out there that there’s so much more to wine.”

Despite the setback of having to open the store in stages, everything else will be business as usual. The counter will be staffed by either a winemaker or sommelier certified to at least WSET level three. (Wine consultant Alex Cilliers has signed on as general manager of the store.) Educational events, as well as a wine festival, are both high on the agenda. Refillable growlers will be a welcome addition to Perth’s retail wine offerings. While team Commune is clearly excited about sharing its passion with Maylands, the trio hope their experience sparks change throughout the community.

“Hopefully we’ve laid the groundwork for anyone else to open a wine store without going through the same bureaucracy we have,” says Heatley.

Commune Wine Store is due to open at 209 Railway Parade, Maylands at the end of October.