The bijou store at State Buildings will specialise in crisp, featherweight choux pastries that will be baked daily. Butter, water, flour, eggs: armed with this Fantastic Four of kitchen staples, the able cook can conjure a variety of dishes ranging from pastas to enriched breads. According to chefs Justine Routier and Quentin Lamblotte, these four ingredients are best put to use to make choux dough: the crisp, barely-there shell of classic French pastries such as eclairs and profiteroles.

Last January, the couple established Choux Bakery, a stall at the Saturday Farmers Market on Manning that sold dainty, filled choux puffs. For the sake of quality, the couple would wake up early every Saturday and begin making the day’s pastries at 3am in the kitchen of Friends Restaurant in the CBD, where Routier is head chef.

“Those long days were very tiring,” says Routier, who would often finish her Friday dinner service just hours before returning to the kitchen. By the time she packed up at the markets, reported for duty at her day job and finished her Saturday service, she had worked a 17-hour day. This continued for more than a year. “It was too much,” she says.

Like most food operators, the couple had to put their business on hold when Covid-19 hit. Now that restrictions are lifting, they’re pressing go on the next chapter of the Choux story: a dedicated store.

Taking over a shopfront at State Buildings that once belonged to Sugarplum Sweets and West End Deli’s cereal and sandwich bar, Choux Bakery will sell choux pastries that the couple will bake each morning. (The store will only be a retail outlet – the baking will take place in a new commercial kitchen elsewhere in the CBD). While Routier will continue in her role as head chef at Friends Restaurant, Lamblotte will manage the store.

For those yet to go toe-to-toe with Choux Bakery’s goods, the couple’s pastries are featherweight specimens complete with craquelin, a crisp overlay that adds a crunchy element to each puff while also ensuring each piece of dough rises evenly before being filled with crème pâtissière. The puffs are available individually and in choux cakes or choux towers that can be customised for events, baby showers and weddings.

The store is currently being renovated and fitted with equipment – expect emerald green splashback tiles, which will make for a colourful contrast with the exposed brick. Neighbours Sue Lewis Chocolatier and Honeycake make this underground cluster of shops something of a destination for dessert fans.

Choux Bakery is due to open at the end of September. 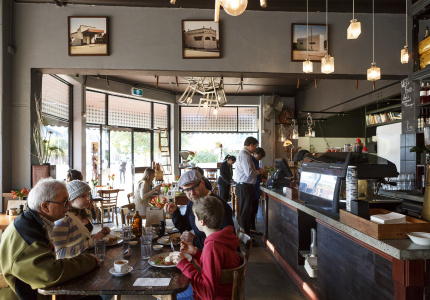 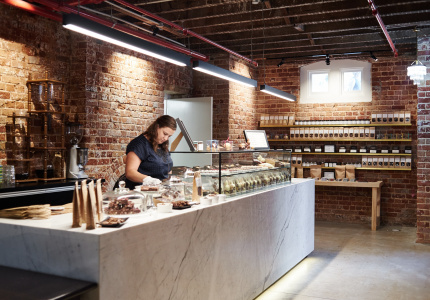