A classic dessert from Italy’s south comes to Northbridge. 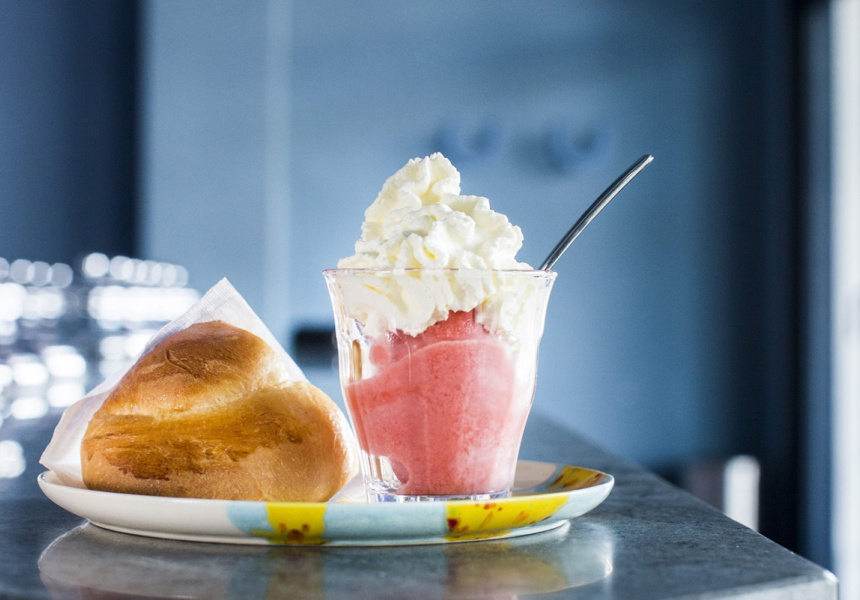 Take it from a Sicilian: we take our granita seriously. We eat in the morning before work. We eat in the afternoon on cobblestoned streets under the shade of gelateria awnings. We eat it in winter. This iced treat is such an integral part of our lives that there are unofficial rules in Italy’s sunny south governing our enjoyment of granita.

For instance, mixing lemon granita and coffee, according to a barista I once met, is a no-no – unless, of course, you’re the sort of person who enjoys an upset stomach (lemon tea with lemon granita, however, gets his seal of approval). Granita with chinotto – a bitter, fruit-based soda – is another acceptable combination, as is topping the granita with panna (Italian for “whipped cream”).

But one of the most popular ways to take your granita is with brioche – a soft, slightly sweet bread. So commonplace is the practice of ordering your granita con brioche in Sicily that ordering granita without this traditional accompaniment is likely to be met with a suspicious look from your server.

Starting this weekend, Perth sweet-tooths can experience this tradition – the granita con brioche, not the dirty looks – when Northbridge gelateria Chicho Gelato adds it to the menu. According to Chicho Gelato owners Cesare and Carly De Bartolo, this will be the first time West Australians can enjoy the treat since Pisconeri’s Gelato Shop served it in the ‘70s.

“Let’s be clear, this is no ‘slushy’, which plenty of folks try to masquerade as granita,” says Cesare, a Calabrian with strong thoughts on what a granita should and shouldn’t be. “Sicilians are famous for their frozen desserts. They pioneered them long before the invention of modern refrigeration and used Mount Etna snow to freeze their drinks and make desserts more than 500 years ago.”

Although granita is similar to sorbet – both are traditionally made using only fruit, water and sugar – Cesare says granita contains more water, resulting in a thicker, more refreshing mouthfeel. While different regional granitas exist throughout Italy, lemon, mulberry and coffee are considered classic flavours. Initially, Chicho Gelato will churn two granitas: fragola (strawberry) and mandorla, an almond-flavoured version synonymous with the Sicilian port of Catania.

Similar care and attention is paid to the brioche. Known in the Sicilian dialect as brioscia cu’ tuppu (tuppu refers to the shape of a grandmother’s hair tied in a low bun), the brioche is baked daily using a sweet, enriched dough. While the process of making the brioche is time-intensive, eating it is a breeze. Cesare says the dish is best enjoyed by tearing off pieces – start with the top – and dunking them into the granita. Repeat until you’re out of both bread and granita, then give quiet praise to the Sicilians for their ingenuity all those centuries ago.