Sustainability, history and community come together at a new cellar door from one of WA’s most exciting new brewers. 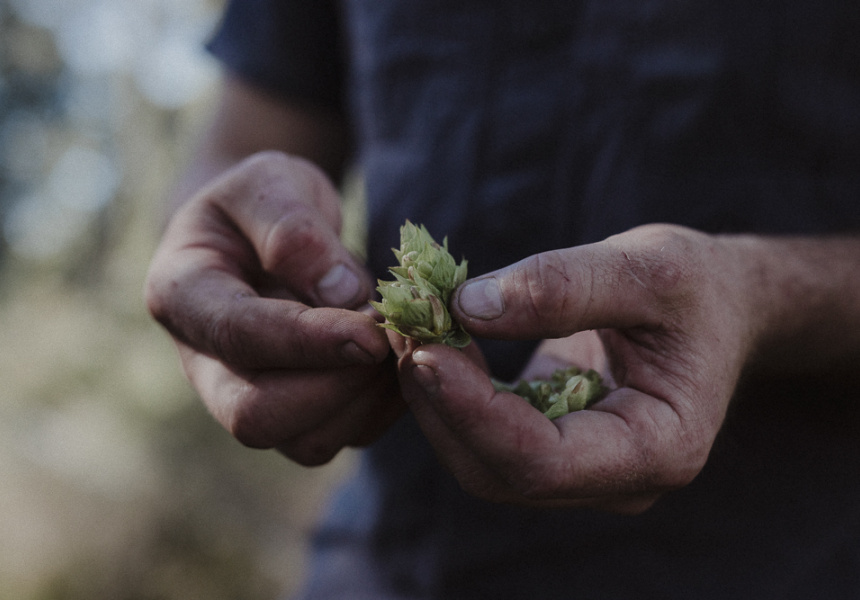 If it feels like Rocky Ridge Brewing Co is everywhere, that’s probably because it is.

While the sustainability-minded Busselton-based brewery has just three beers in its core range, it has released more than 70 – and counting – beers via a seasonal range that can have as many as 16 experimental and collaboration brews in circulation at any one time. Two years since establishing Rocky Ridge in 2017, the brewery’s husband and wife owners Hamish and Mel Coates have finally opened a 24-tap cellar door.

“With Rocky Ridge, we set out with a firm goal to be self-sufficient,” says Hamish, who started his brewing career at Cheeky Monkey Brewing before breaking out on his own. “We wanted to have a net-zero impact and help to show other businesses that it's possible to be sustainable while also being environmentally conscious. As a kid growing up on the farm I've seen the change in our climate first-hand – lower rainfall, shifting seasons and loss of biodiversity. Without action, this is only going to continue to worsen.”

Ergo, action it is. Rocky Ridge’s wholly off-grid brewery is on the family’s fifth-generation dairy farm in Jindong, 15 minutes out of Busselton. Eighty per cent of what the Coates put into their beers – including the barley and hops – is grown on the property according to organic principles, with organic malt currently sourced from Keen Hills in Dumbleyung. The aim is for this figure to reach 100 per cent by the time of the 2020/21 harvest.

All waste produced in the brewing process is re-used on site. Spent grain is fed to the cows (Hamish: “they love it.”) and all other organic by-product is composted. All water used goes through a treatment system that’s almost totally self-sufficient. Beers are packaged in extra-light recyclable aluminium cans, delivering a fresher, greener and less-expensive product to a growing horde of loyal drinkers. After 18 months of planning by the Coateses, drinkers can enjoy Rocky Ridge’s entire range on tap in the heart of Busselton.

“I struggle to really verbalise what the idea of having a cellar door is for us,” says Hamish. “But it’s our home, it’s our heart and soul. It’s our way of showing that we’re here for the future.”

The Rocky Ridge Cellar Door occupies an original Marine Terrace house built in the 1930s. The home, one of the first built in this part of Busselton near the jetty, belonged to Hamish’s grandfather and has remained in the family since. Welcoming guests for both paddle tastings and takeaway purchases, the new HQ holds true to the brand’s ethos of local and sustainable.

There’s similar thought in the brewing process, too. Surplus kiwi fruit from an enthusiastic neighbour, oranges, elderflower and even wine have all featured on the ingredients list on Rocky Ridge’s distinctive oversized cans. A recent release – currently on tap for tastings at the new cellar door – is a coffee-infused beer aged for four months in a former chardonnay barrel. The beer was brewed in collaboration with Margaret River Roasting Co and Singapore’s Smith Street Taps. Another joint effort, dreamt up with Eagle Bay Brewing Co and Dunsborough Cellars, is a sea water-imbued wet-hopped sour ale called, astutely, the “Eagle Rock”. Coming soon is the “Rose Gose”, a rosé grape and gose hybrid made with new-wave Margaret River producer LS Merchants. The list goes on. And on.

“In the craft industry, there is very little loyalty to particular types of beers, but there is loyalty to brands,” says Hamish. “We knew that if we got it right, that would allow us to continually push the boundaries and be creative with what we brew. Hopefully now with the cellar door, people can get a better understanding of the breadth and depth of beers that are available; a real appreciation of the flavours in beer and a greater knowledge of the brewing process. Beer is a conversation. It should be enjoyed.”