From classically influenced styles to wild experiments, this once passé grape is finding favour among a new generation of winemakers and drinkers. 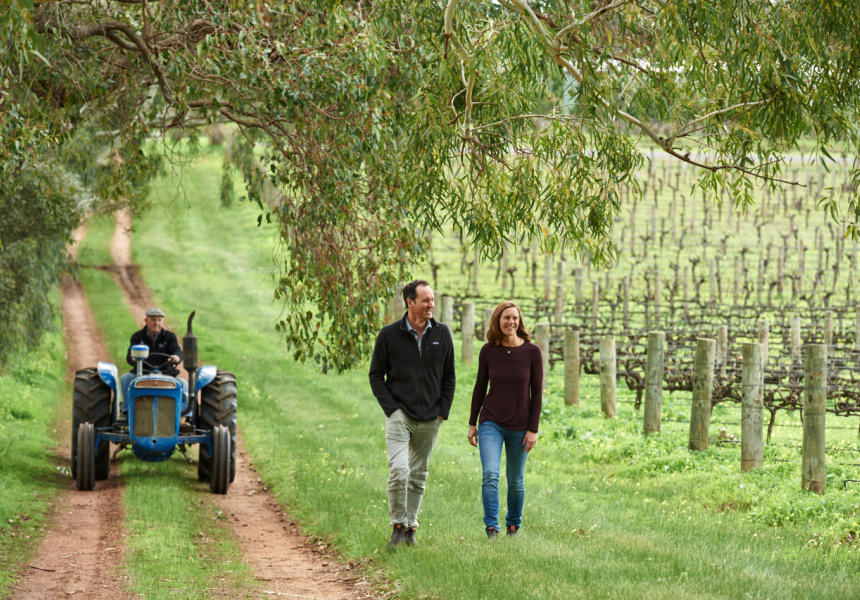 Rob and Genevieve Mann of Corymbia

For West Australians that came of age in the ’90s, chenin blanc meant one thing: Amberley chenin. A plush fruit salad in a glass, the wine sold like hot cakes and typecast chenin as a one-trick pony.

“The Amberley chenin was that famous, it made an entire generation associate chenin blanc with sweet wine,” says Nic Peterkin, winemaker at Margaret River winery Las Vino. Growing up in Margaret River, Peterkin saw chenin everywhere, not least in the vineyard at Pierro, his family’s Willyabrup winery.

It wasn’t until Peterkin tasted a selection of South African chenins at university that he saw the grape’s potential.

“They were rock-star good,” says Peterkin. “Incredible. Next-level flavour. Like some of the best wines I’ve tried. I didn’t know you could make chenin like that. You just had to treat it with a bit of respect.”

The experience moved Peterkin so much that the first release under his label was the 2013 Las Vino CBDB – an acronym for chenin blanc dynamic blend. Detailed, textured and bright with lemony acid and crunchy apples, it was one heck of a debut, with subsequent releases continuing to raise the bar. Peterkin’s commitment to chenin goes beyond the bottle. Last year, he organised the inaugural International Chenin Blanc Symposium at the Willyabrup Hall: a tasting that brought together 21 chenins from around the world, including a strong cross-section of Margaret River chenins. Equally well represented was the Loire Valley in France, the grape’s spiritual home and a region that transforms chenin into everything from dry sparklings to honeyed dessert wines.

Despite standing in the shadow of white-grape varieties such as chardonnay and sauvignon blanc, chenin is ingrained in Western Australia’s wine story. The grape is planted extensively throughout the Swan Valley and Margaret River, and produces wine across the flavour spectrum, from apples and pears to tropical fruit. Chenin is also the main grape in Houghton’s longstanding yet modestly priced White Classic blend (nee White Burgundy), an Australian classic and blue-chip cornerstone of so many cellars.

Although many West Australian wineries dabbled in chenin, more intriguing expressions of the grape started to surface around a decade ago, many taking their cues from Loire Valley styles. There’s the complex, richly textured chenin from Bella Ridge Estate, the Herne Hill winery run by Jodi and Alon Arbel (he’s an Israeli windsurfer turned winemaker), and the racy crémant from organic Margaret River winery Blind Corner.

Among those early chenin dissidents was Margaret River-based winemaker Kate Morgan of Ipso Facto Wines. After having her head turned by a tasting of benchmark Loire Valley chenins, the opportunity to work with some old, dry-grown chenin (working with mature vines is critical to making good chenin) inspired her to follow suit – in a way. “I don’t know what I was expecting, to be honest, but I was super happy with the result,” she says.

And so the 2010 Ipso Facto chenin blanc was born: a smashable yet intriguing drop that was wild fermented, aged in old oaks and had other hallmarks of contemporary lo-fi winemaking. Although Morgan had France in her sights, she wasn’t quite ready to walk away from what Australian winemaking had taught her.

“The way I saw it, chenin was similar to chardonnay in that it was a neutral-ish variety that you could put your mark on and add a bit of texture, so treated it a lot like chardonnay,” she says. “I took all the experience I already had and looked to that rather than what they were doing in France. I guess I put the Margaret River spin on it.”

Margaret River isn’t the only postcode excelling at chenin. In the Swan Valley, Genevieve and Rob Mann of Corymbia produce a mighty, classically inspired chenin that takes the generosity of Swan Valley chenin and amplifies it. Arch Kosovich, the third-generation winemaker at John Kosovich Wines, continues to release toasty aged chenins that illustrate the grape’s longevity. Bree Lavell and Paul Hoffman of Swan Valley Wines, newer arrivals on the scene, make captivating amber chenins that explore the potential of skin-contact winemaking.

Finally there’s Vino Volta, Kristen McGann and Garth Cliff’s new label that puts the wines and wine styles of the Swan Valley front-and-centre. To say the couple is committed to chenin blanc would be an understatement. The Vino Volta range features four different chenins, including a creamy pét-nat, a traditional tank-fermented style, a fascinating saline expression inspired by sherry, and the captivating “Funky and Fearless”: a complex, big-boned wine that’s gotten plenty of attention – in a very good way – in the winery.

To mark International Drink Chenin Blanc Day on Saturday June 20, McGann and Cliff have teamed up with other WA chenin-blanc producers to offer a sixpack of wines that celebrate the grape’s diversity. The selection spans from benchmark, classically influenced styles (such as the aforementioned Corymbia) to more textured expressions from Margaret River producers Tripe Iscariot, LS Merchants and Las Vino, as well as Vino Volta’s Funky and Fearless. The 2013 John Kosovich chenin wonderfully demonstrates the grape’s ageing potential. At $180, the sixpack is a steal, and it provides a snapshot of WA’s chenin rebirth.

“When you can get people tasting chenin, the response is always positive,” says Cliff. “The next few years is about is showing the people of WA and the people of Australia how good we can make chenin.”

The Best of West Chenin Day sixpack is available online from Vino Volta.