The Best New Cocktails In Perth

There has never been a better time to go out for a drink in Perth. Here’s what you should try when you do. 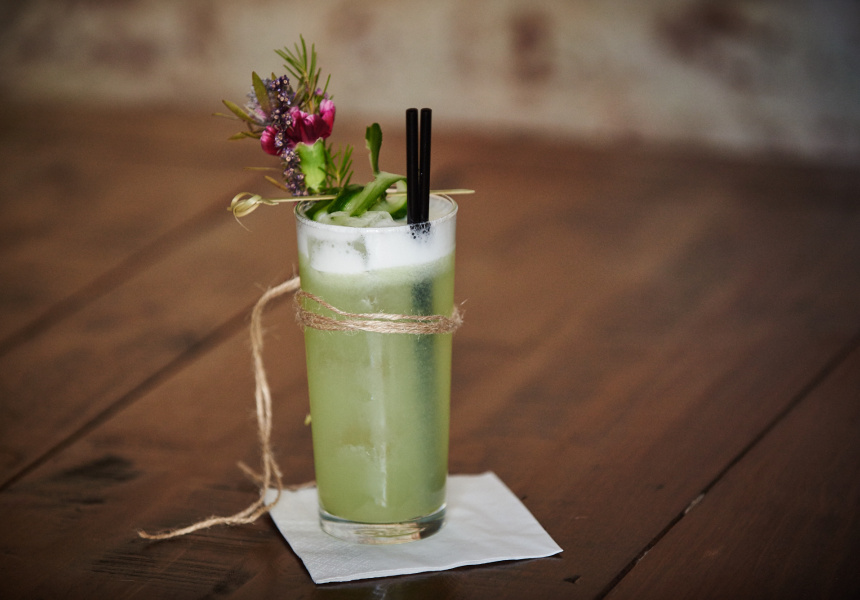 Perth is in the middle of a hospitality renaissance. Small bars are popping up everywhere, staffed by a league of bartenders that treat its craft with deadly seriousness.

That makes it difficult to know what to drink and where. We’ve rounded up five of the best new cocktails in Perth for you to try right now.

The Hadron Colada at The Dominion League

The Dominion League just won Best Cocktail Bar in WA for the second year in a row. Bar manager Tom Kearney is one of the state’s most awarded bartenders. He’s about to drop a cracking new cocktail list that includes a clarified-milk-punch–Pina Colada hybrid he’s called The Hadron Colada.

Kearney says the drink is inspired by an old English preparation that dates back over three centuries. “Milk punches are fantastic but prep time is high, so you rarely see them on menus,” he says. “But pre-bottling the cocktails in batches allows us to reach a level of complexity in flavour that’s otherwise unachievable. All served in the time it takes to crack a beer.”

Aside from toasted coconut and charred pineapple, Kearney says you’ll find rum, brandy, hints of green tea, citrus and chai spice tied together with a silky-smooth mouth feel provided by the clarified milk.

Patrick Carpenter of the newly opened Meat Candy is responsible for this new-age blue drink that’s doing its darnedest to steal the limelight from all that fried chicken.

“It’s a drink I’ve been developing for a few years now,” says Carpenter. “I first came up with it back at El Publico and perfected it for Meat Candy.” Carpenter has custom built a giant soda stream for the restaurant and is mixing his house-made grapefruit soda with tequila, lime and pandan-scented agave nectar. A rim of crushed, pink peppercorns and a dash of blue really bring home those tropical vibes.

Among a sea of new venues Helvetica Bar has already established itself as a stalwart of the Perth bar scene. Well known for its exceptional range of dark-brown liquor, bar manager Jessica Page has been working hard to make sure the lighter, fruit-driven offerings are just as creative and complex.

Page’s new Bella Luna Redux cocktail is a riff on the Ramos Gin Fizz, a fluffy citrus-and-cream drink that was so famous it was the Kardashian of late-1800s cocktails. Tanqueray No. TEN provides the herbal, juniper base note to the drink, and a little elderflower liqueur and blackberry liqueur freshen up the whole thing. The real reason you’ll order a second one, though, is the rosemary-sprig-speared flaming marshmallow that extinguishes itself in your drink.

Balthazar on The Esplanade has received some serious attention after its big facelift earlier in the year. One of the unexpected highlights of the new direction is a wonderfully succinct and thoughtful cocktail list.

Just like the food there is a big focus on using native ingredients in Balthazar’s cocktails. The best example is this clever twist on the classic New Orleans drink.

A sugar cube and bitters are stirred down with Macadamia-infused bourbon and a herbal Italian liqueur called Strega that’s infused with lemon myrtle, foraged locally in Subiaco. The real treat is the garnish of macadamia brittle made from the left over bourbon-soaked nuts.

Bar Lafayette’s David Stucken is something of a mad scientist and if you ask about the concoctions infusing and ageing behind his bar you could be there all night.

His latest offering is the Martini En Provence, which Stucken says, “is a little something I’ve designed for the seasonal change, based around the ongoing trend of lighter, aperitif-style cocktails”.

Ketel One Vodka is aromatised with herbs de provence, then combined with coconut and pineapple liqueur, citrus and a good splash of Albarino wine. A little lemon zest and fresh sage finish off a cracking drink for the impending warm weather. 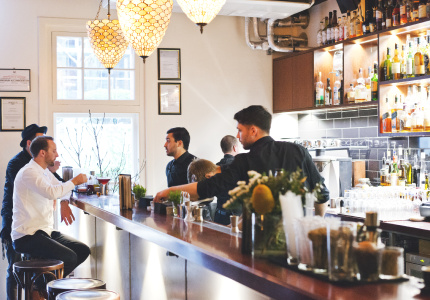