Instantly Likeable Bar Rogue Says No to Reservations, But Yes to Big-Flavoured Snacking

Le Rebelle’s new spin-off has far-reaching wines, a menu that includes cold fried chicken with house-made fromage blanc and caviar, and a laidback come and go – and drink and eat – as-you-like approach. 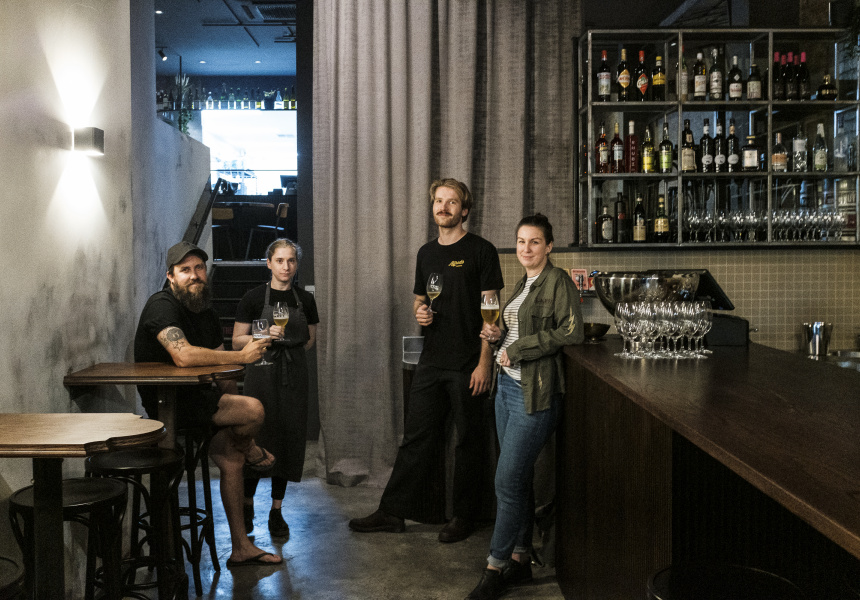 In December 2020, Perth said its goodbyes to Must, the Highgate bistro-slash-wine bar that introduced the city – and some could argue, Australia – to the pleasures of charcuterie. In December 2021 – almost a year to the day that Must shut up shop, coincidentally – Beaufort Street welcomed a new wine hangout to the neighbourhood.

Enter Bar Rogue, a 60-person watering hole from Sarah and Liam Atkinson of neo-bistro Le Rebelle. In the Atkinsons’ eyes, Bar Rogue will be the spontaneous, walk-ins only sidekick to their mothership up the road: what they hoped the front half of Rebelle would have been had demand for seats not made it a reservations-only prospect.

When Broadsheet checked in with the Atkinsons in November, their vision for the two-tiered space was old-world in the front with the mezzanine area adopting a more modern aesthetic. The husband-and-wife restaurateurs have come good on their word. The street level area looks like it’s been watering the crowds for years. A handsome U-shaped counter and bar sits at the heart of the room; wall-mounted timber tables have Tinder Central written all over them; aluminium venetians in the bay window break up the view to The Queens across the road.

Upstairs, the bar area’s dark timber and concrete flooring give way to banquettes and spacious tables that verily whisper “dine here”. Abstract light fixtures hover in the air. Save for the framed black and white photo of Meatloaf and some salvaged signs from the space’s past lives as Kings Brasserie and Mykonos, everything looks very of the moment.

It’s a similar story with the drinking and eating. Although bartender Sam Cocks’s drink list includes beers on tap, fancy spirits and a concise edit of cocktails, wines are the focus. Whereas Le Rebelle had a French-Australian focus, Bar Rogue takes a broader view of the wine world with the cellar ranging from New Zealand pinot noir and skin-contact South Australian chenin blanc to renegade American riesling from Oregon.

This global flavour carries over to the menu that allows guests to pick at stracciatella with smoked eggplant and harissa, chicken skin and cucumber sandwiches, and cold-fried chicken with house-made fromage blanc and caviar. While Liam’s fingerprints are all over the menu, first-time head chef Sofika Boulton – last seen cooking at Wildflower – has also helped shape the food side of things. Whereas her previous gig was about finely tuned, intricate dishes, she’s looking forward to a change of direction.

“The processes and methods will still be there, but I wanted to be a little bit more chaotic and loose with it and cook food that was less fussy but still delicious,” she says. “When I met with Liam, he said the exact same thing. But doing that, you have to really prove that you can cook because you don’t have anything to hide behind.”

This idea of getting back to basics seems to drive a lot of the thinking at Bar Rogue, from the look of the space, to the relaxed service style under Asha Flintoft and the rest of the floor team.

“We don’t want to complicate anything,” says Sarah. “It’s really lovely how now, at the end of the day, hospitality is about simplicity. It’s about a person coming through the door that wants to drink and wants to eat and you give that to them. For a long time, we [Perth] went away from that.”