“There are imperfections that make each mooncake different from the last. There’s an energy and love that goes into it which people say you can taste.” 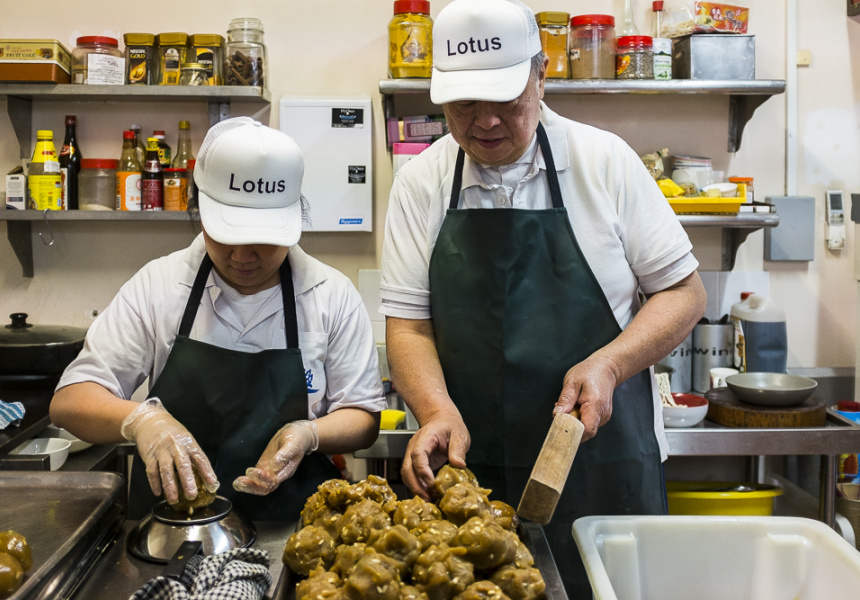 Alex Yong was 24 when he made his first mooncake, a sweet Chinese pastry synonymous with Chinese mid-autumn festival celebrations.

He was cooking in Kuala Lumpur and his teacher was a man named Fookkor, the pastry chef at a restaurant called Seng Kee (Fookkor also taught Yong to how to make dim sum and other Asian pastries). For the next 14 years, Yong fine-tuned his mooncake chops before migrating with his brother Eddie to Perth in 1988 and starting Sri Melaka, a William Street restaurant that specialised in Nyonya cuisine, which blends Chinese and Malay ingredients and techniques.

In 1997, the two Yongs – following a switch to vegetarianism – closed Sri Melaka and opened Lotus Vegetarian Restaurant and Lotus Vegetarian Market at the western end of James Street. It was also the year that Yong started making mooncakes by hand again – and the veteran pastry-maker hasn’t stopped since.

The process begins with the thick dough, which is made from sugar, lemon, water, flour and peanut oil. The dough is then wrapped around a sweet filling – traditionally lotus paste or red bean – before being pressed in an ornate mould. The cakes are turned out and then baked for around 20 minutes in an electric pizza oven. Each day, Yong turns out around 170 cakes in eight different skin and filling combinations.

“There are imperfections that make each mooncake different from the last,” says Yong. “There’s an energy and love that goes into it, which people say you can taste.”

But taking a mooncake for a spin isn’t as simple as taking a couple of bites. This is not a light snack. My mum cuts her mooncakes into eighths, per tradition, and slowly works her way through a single cake over a few days. I cut mine into quarters, which sort of makes me feel a little less guilty about eating it all at once. (I haven’t had the guts to check its nutritional value.) Typically, mooncakes are consumed with tea, but they also go really, really well with whiskey. Fun fact: with the exception of cakes made with a salted egg yolk, mooncakes are also vegan.

As with so many dishes around the world, mooncakes have, with time, evolved beyond the traditional iterations. Producers and five-star hotels throughout Asia offer luxe versions filled with everything from truffle-infused durian to Champagne-flavoured sauces and other fancy trimmings. While your correspondent swears by the classic lotus-paste version (largely due to a surplus of stubbornness and lack of funds to try the fancier ones), Lotus customers seem to have a taste for the best-selling pandan snow skin (a non-baked dough made from glutinous rice flour) with lotus-seed paste.