Ace Pizza to Close in April; Sam Ward to Return

A Beaufort Street favourite closes while another makes a comeback. Ace Pizza to close in mid-April.

The closure, however, is only temporary. The site will reopen a month later as Highgate Drink and Dine, a neighbourhood restaurant-slash-bar with former El Publico chef Sam Ward taking over the kitchen.

As one of the country’s canniest interpreters of Mexican cuisine, Ward will unsurprisingly bring some south-of-the-border magic to his new posting. Yet the Kiwi-born chef is keeping an open mind when writing his menu: just don’t count on any Ace Pizza favourites surviving the makeover.

“There’ll be no pizza and no fried mac and cheese,” he says. “I’ll be focusing on using the wood-fired oven and grill to create dishes that are true to their ingredients but with a free reign on seasonings and flavours.”

Or in practical terms: Ward is just as likely to whip up a Mexican mole sauce as he is to jerk-season local quails. Now factor in dishes such as choka – a spiced Trinidadian-Indian eggplant dip – with baked-to-order flatbread and the promise of Kiwi-influenced cooking and you’re talking a wild flavour ride that Beaufort Street – and, indeed, Perth – hasn’t seen before. Although Ward admits the menu might be hard to pinpoint geographically, deliciousness and accessibility will underpin everything he puts on the menu.

“It’s the sort of food that intrigues me but at the same time I want to serve it to people because I think they’re going to like it,” he says. “There’s always going to be something nice to eat, but there’s also going to be new stuff to keep you excited.”

While Ward will be working with international flavours, he’s committed to supporting local farmers and will be sourcing and breaking down whole beasts – Macabee Dorper lambs, for instance, or Blackwood Valley grass-fed cows – and serving the various cuts throughout the week.

Highgate Drink and Dine is slated to open in mid May at 448 Beaufort Street, Highgate. 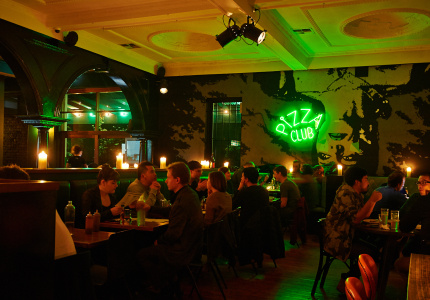