There’s a neighbourhood bar with an emerging talent in the kitchen, a help-yourself cafeteria from the North Street Store crew and the Royal Hotel's smart-casual wine bar. Plus, a breezy, all-day diner with State Buildings DNA. 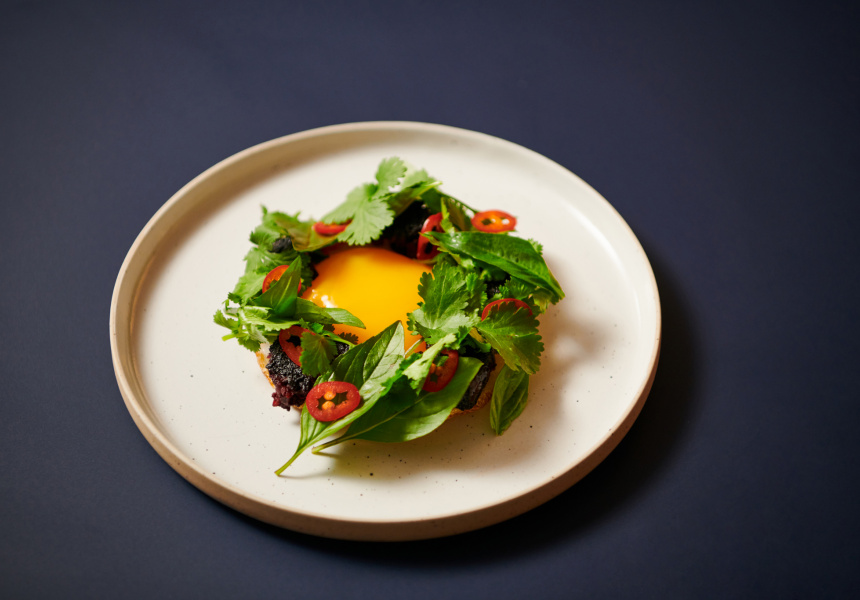 “It’s all about the ingredients,” says chef James Cole Bowen of Doubleview’s new neighbourhood bar, Corner Dairy. “Once you’ve got good ingredients, the rest just follows.” Which, of course, is true in a way. But when you’re a cook with a CV like Cole Bowen’s, your ingredients are more likely to succeed than those that wind up in other kitchens. Throughout his career, he’s clocked time at Restaurant Amuse, Ku Dining and Le Rebelle, plus high-flying Melbourne restaurant Lûmé. It’s a formidable resume that translates to smart dishes drawing from a diverse set of influences including ’60s dinner-party throwbacks, cafe culture, even Northbridge Vietnamese institution Viet Hoa.

Think stuffed barbeque chicken wings with ’nduja and honey; fried school-prawn lettuce cups with cocktail sauce and horseradish; stracciatella served with witlof and cumquat marmalade; and fried Wagin duck egg with soft herbs, hot sauce and black pudding. Add to that, craft beers (on tap and packaged), natural-leaning wines and classic cocktails, plus a takeaway window for morning coffees, and you’ve got plenty of reason to make your way here.

The newest project from team North Street Store, has more than a whiff of Sizzler, Miss Maud’s and Pizza Hut all-you-can-eat to it. And we mean that in the very best way. In some instances, it’s the food, such as a crisp salad of lettuce, cucumber, tomato and capsicum, or a vivid jumble of grated beetroot and carrot matchsticks. In some cases, this connection is literal – co-owner Lachlan Bisset is almost certain the refrigerated buffet he bought at an auction came from Miss Maud’s, the home of one of Perth’s most famous smorgasbords. For those that love Bisset and co-owner Craig Stewart’s brand of nostalgic, unembellished deliciousness, Peoples Cafeteria is likely to make you very happy.

While the cooking has little in the way of frou-frou embellishments, dishes are cooked with care. The tightly wound cabbage rolls stuffed with toasted buckwheat and mushroom and dressed in a tomato sauce are a rousing endorsement for vegan food. The roast chicken consists of Marylands that have been taken off the hip bone, seasoned like the supermarket rotisserie chooks of the’90s, and cooked in a charcoal-burning tandoor till tender and smoky. This is unapologetic home cooking in a no-fuss venue. The former Chinese restaurant has been left pretty much as-is. It's BYO drinks and guests help themselves to their own glassware and cutlery.

After joining Si Paradiso in 2020 (and broadening WA’s definition of Italian(ish) cooking via lobster sandwiches, mushrooms roasted with schmaltz and crab roti), chef Paul Bentley has opened Casa, a neighbourhood bar and bottle shop in Mount Hawthorn. Here, he’s again cooking high-calibre cosmopolitan snacks that defy pigeon-holing – this time, plates of golden and squishy Chinese doughnuts (you tiao) piped with taramasalata and topped with mussel escabeche; La Delizia Latticini stracciatella studded with pellets of cucumber and brightened with yuzu juice; and a roast chicken and chips plated alongside a puddle of mole poblano. Sydney chef and co-owner Enrico Tome’s influence can be tasted in house-made pastas such as a squid ink spaghetti alla chitarra with sea urchin butter, and agnolotti filled with duck.

For afters, there’s a tres leches (three milk) lamington that’s been steeped in a mix of milk, condensed milk and coconut milk. And a Golden Gaytime remake made in conjunction with Chicho Gelato. The team is just as serious about its drinks. There are nine wine fridges that operate at four different temperatures to suit different wine styles. (Wines, organic and/or biodynamic, are also available on tap.)

John Parker, owner of The Royal Hotel, describes the venue’s new wine bar as a “shrine to the vine”. For now, that means a selection of 75 wines – roughly one-third white, one-third red, and one-third sparkling, orange, rosé and chilled reds. It sits somewhere between Fleur’s “old world meets new world” selection (as wine director Daisy Case describes it), and the “fun turn on pub classics” at the upstairs Royal Hotel public bar. Local winemakers are well represented and the drinkability factor is high across the list. In addition to the wines, Willi’s has also assembled a line-up of vermouths and European liqueurs.

Fluffy, charcoal-grilled lamb koftas with puffy, baked-to-order wholemeal pita bread. Bright, lively salads. Dense peanut parfait cloaked in a featherweight chocolate sheath. If only all service station food was like Servo, the first venue from the ambitious, much-anticipated redevelopment of the former Leederville Hotel site. The 90-person diner has taken over the former Blue Flamingo space.

The menu is a freewheeling deep dive into flavour, swinging from raw fish teamed with yuzu, pomelo and puffed green rice to fried chicken with garlic cucumbers and various shish skewers (pork belly, Wagyu, chicken) grilled over a Japanese konro grill. While dinner is a sprawling affair designed for all-in, shared eating, the menu at lunchtime is shorter and has been written with lighter, brighter daytime eating in mind. (A changing array of salads – cucumber, tabouli and feta, say, or orzo, zucchini and mint – lines the counter of the open kitchen). Gun sommelier Emma Farrelly is behind the fun wine list; and cocktail whiz Eoin Kenny has assembled a neat drinks list, including thoughtful no-alcohol options such as a turmeric and mango lassi, and a peach and jalapeno highball.

This much anticipated spin-off from the Foxtrot Unicorn crew, is a serious contender for the title of Freo’s best place to drink wine. If you’ve ever wondered what a 300-bottle wine list looks like in the flesh, wonder no more. Bottles are everywhere inside the former Mister Finch site. Chubby bottles of pet-nat sit on shelving above a handsome dark timber table. Magnums are attractively arranged around a fireplace. In short, the wine is as much a design feature of Nieuw Ruin as the framed interwar real estate maps, vintage crockery and other ephemera that beautify this transformed, welcoming cottage.

While wine is the focus, cocktails are another focal point, as is the food. There’s an appealing English vibe to the menu which features crumbed pig’s head with mustard, rabbit and pork pie, curried fries and Eccles cake to finish. There’s also crisps with tarama and smoked trout caviar; sourdough flatbread partnered with a laver butter; devilled duck livers; and salted monkfish “under a fur coat” – the colloquial name of the Russian and Eastern European dish shuba that features herring, beetroot, vegetables and mayonnaise. (The vegetables, when arranged over the fish, look like a fur coat).

“The idea is to just be a really low-key shack on the water,” says Jetty Bar owner Miles Hull, the hospitality veteran whose CV includes Little Creatures and Alex Hotel. Once guests enter the galvanised “shack”, the under-promise-over-deliver begins, starting with the interior's cool, timeless look. Although Hull has drawn plenty of inspiration from low-key beachside eateries – from a caravan in the Ionian Islands to Cottesloe’s legendary Van Eileen – he’s pitching Jetty’s food and drink offering a little higher. Greek wines are a particular focus of the cellar while the mixed drinks keep things summery, light and Italianate.

Chef Marcello Segalina has written a similarly beachy menu that runs from house taramasalata and squid with ’nduja butter to fried school prawns and grilled sardines. A vertical rotisserie will supply chicken kebabs spiced with paprika and orange juice. Although the Mediterranean Sea is a recurring theme at Jetty, management hopes the project makes people rethink the Swan River. “Perth is lacking quality venues on the water,” says Hull. “You’ve got a few touristy cases which are great for views, but ultimately, it has to be about the quality of food and drinks.”

It’s an excellent time to be a sandwich lover in Perth. The newest reason? Peggy’s, a Freo sandwich spot with an Andrew McConnell alum in the kitchen. Owner-chef Harry Peasnell has invested in two shiny new ovens so he can bake the two breads in-house: a white-sesame-seed sub (“kind of like Bakers Delight, but just a bit better”) and a 48-hour sourdough-focaccia-Turkish-bread hybrid. The opening menu reflects Peasnell’s diverse sandwich tastes, as well as Melbourne’s new-wave sandwich culture championed by venues such as Hector’s Deli and Falco Bakery.

In the morning, guests can hook into a four-cheese toastie ramped up with kimchi salt or Peggy’s homage to the Sausage McMuffin. From 10am, the core menu kicks in, featuring a Cubano spiked with mojo spice, Peggy’s take on the continental roll, plus a chicken-schnitzel sub. Vegetarian guests can get stuck into an egg-salad number as well as a fried-eggplant-and-spicy-sugo parm, both served on focaccia. The venue will soon introduce evening trade, adding small plates, beer and wine to the offering. For now, coffee from Community Coffee and soft drinks make up the beverage choices until Peggy’s licence gets approved.

Is it possible to modernise a restaurant and turn the heads of a new generation of eaters and drinkers without upsetting regulars? The answer, it would seem, is yes: provided you go about it by introducing a lot of small changes rather than sweeping wholesale ones. Which is exactly what George Kailis, founding partner of beachside dining room The Shorehouse, has done. Splashes of black and grey paint downplay the space’s former Hamptons-inspired vibe and take it somewhere a little more contemporary. And the former lounge at the back of the dining room has been reborn as a bar area complete with high-top tables, stools and a vintage copper-gilded mirror.

Chef Pali Singh has taken a similar “softly, softly” approach to the food side of things. Regulars can still order Shorehouse classics such as the fried chicken, crab-and-prawn linguine, and croquettes, but these crowd favourites are now joined on the menu by eggplant-and-chevre ravioli with artichokes; Josper-roasted cauliflower with herbed tahini; and a winning prawn-schnitzel bun served with warrigal greens and taramasalata. Best of the newcomers, though, is the build-your-own crab sandwich platter starring hickory-smoked mud crab meat, four milk buns, herbed butter, mustard cress and house potato crisps.

There are dishes at Lola’s Filipino Diner that will whisk expats straight back to the Philippines. The adobo. The grilled pork belly known as liempo. The inasal grilled chicken. But for those not so familiar with Filipino culture, the menu also has some familiar names: popcorn chicken, say, or Dan Hong-style cheeseburger spring rolls. In short, Lola’s 2.0 (the first Lola’s opened in 2017 at Spencer Village Food Court in Thornlie and closed in 2019) is all about exploring the wide world of Filipino comfort food. The core menu includes pork belly adobo and garlic rice; fried chicken, fried to order, served on the bone and brined with a mix of lemongrass and ginger; and longganisa sausage, chunky, bright red snags made in-house and served with a fried egg and garlic rice.

“The Spanish probably had the biggest influence on Filipino food, but you have to remember that way back in history, the Philippines were a trading route, so there’s a lot of influences,” says co-owner Alasdair Craigie, who also co-founded Royal’s Chicken and Burgers.) “So there’s also a lot of Malay-Chinese influence, a lot of Indonesian influence and it’s all kind of been merged into this one kind of cooking that’s also been Americanised a little.” 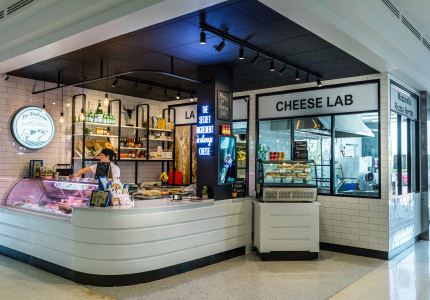 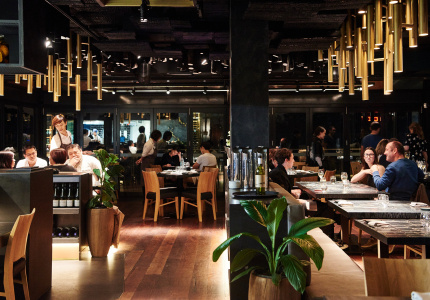 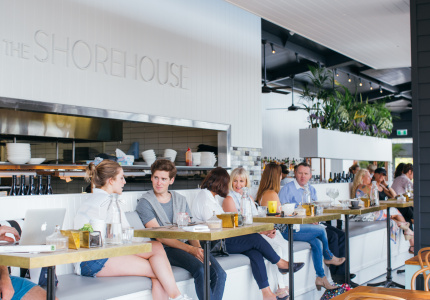