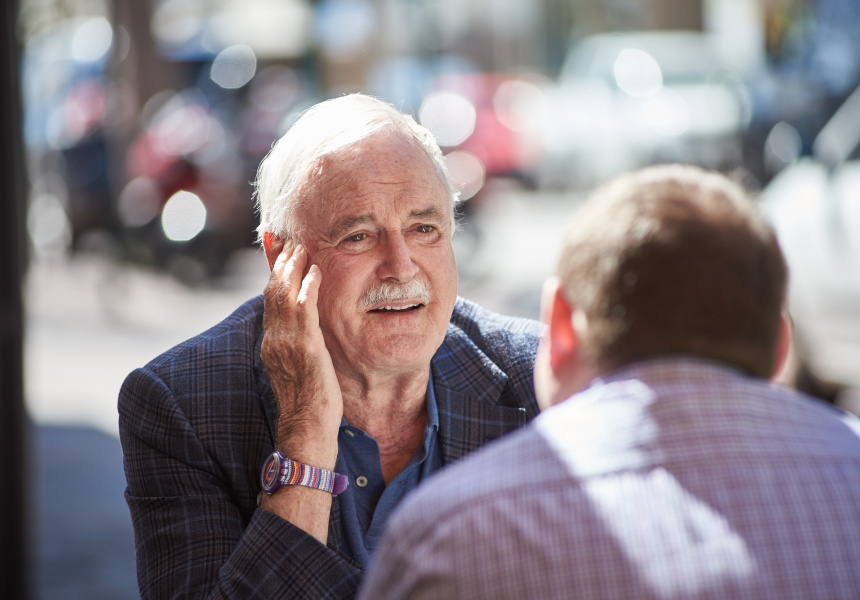 Fawlty Towers first screened in 1975, famously running for just 12 episodes over two series. Written by comedy legend John Cleese and then-wife Connie Booth, who also starred as Polly, Fawlty Towers has finally been brought back to life more than 40 years later as a live stage show.

I meet Cleese at busy South Perth cafe Atomic. He is a tall and imposing figure, although at 76 nowhere near as manic as his much younger alter ego Basil Fawlty. He talks almost non-stop for double our allotted time, starting with tales of his recent bout of shingles and an arthritic hip before we head into more expected territory.

The new Fawlty Towers live show is made up of three of the most popular episodes – “The Germans”, “The Hotel Inspectors” and “Communication Problems” – with new material written by Cleese to tie it all together into a single story. His decision to bring Fawlty Towers to the stage is an interesting one given the mixed reaction to Monty Python’s 2014 reunion at London’s O2 Arena.

“One of the things that the critics didn’t really understand was that it wasn’t a theatrical occasion, for the simple reason that the audience knew the words better than we did,” says Cleese. “It’s like a rock concert. If you really want to hear the songs, you hear them in better quality at home. That’s not what it’s about. It’s about experiencing being with the performers and with their fans and it’s a completely different kind of occasion.”

Cleese credits his decision to debut the show in Australia to his genuine love for the country, the positive attitude of the people and the pool of acting talent. The Australian cast of the show was chosen in February. Leading the cast as Basil is Python-musical Spamalot veteran Stephen Hall. Blazey Best is Sybill, Aimee Horne is Polly and Syd Brisbane is long-suffering waiter Manuel.

“Back in the ’70s I’d go to small shows in Melbourne and Sydney, and the quality of the performances was absolutely top class,” says Cleese. “I’d talk to the actors afterwards, and the sad thing was that they had a problem making a living. That’s just the way it was. So I knew that Aussie actors and actresses were very good before Hollywood ever noticed it. Now of course it’s taken for granted. About a third of the big stars are from Australia or New Zealand.”

Many comedy fans regard Fawlty Towers as a British comedy classic, but not everyone agrees. It is a glaring omission from the BBC’s current celebration of 60 years of the British sitcom – featuring remakes, prequels and sequels of classic shows – and Cleese says that he knew nothing about it.

“I would have thought they would repeat Monty Python’s Flying Circus. I think I’m right in saying that they haven’t put it out for 15 years. When a lot of kids came to the O2 to see Python and loved it, they’d never seen it before. I don’t know why they wouldn’t put Monty Python on, although sometimes I get the suspicion it’s because it shows up some of the modern comedies.”

Cleese says he doesn’t watch much TV these days, so what makes him laugh?

“Trump. And the Russians, because they always accuse everyone else of what they’re doing themselves – the outrageousness of it makes me laugh. Otherwise, what makes me laugh? Not a lot. My wife and I laugh a lot because she’s the funniest woman I’ve ever been with, and that’s praise because I was with Connie Booth. She’s got a wonderfully mischievous sense of humour.”

With more than 50 years of comedy experience under his belt, Cleese has plenty of advice to offer the current generation of actors and comedians.

“At my age I know if something’s funny, although I usually don’t know if it’s a little bit funny or a lot,” he says. “Comedy is all about interaction with the audience. It doesn’t matter how good the performance is, if the audience isn’t laughing it’s not funny. You can do Hamlet in silence and it won’t harm the play, but if you’re doing comedy you’ve got to mesh with the audience and learn how to speed up where there’s not so many laughs, and how to slow and hold the pause when there’s a big laugh.”

There’s no sign of Cleese slowing down, or time for that second hip replacement. After leaving Australia he’ll spend just a week at home before travelling to Austria to read excerpts from his autobiography So, Anyway… at a literary festival, and then to Berlin to collect the “rather nice and prestigious” Rose d’Or Lifetime Achievement Award from the European Broadcasting Union. Then he continues his tour with Eric Idle through the USA and Canada before seeing his re-write of a lost Georges Feydeau (a French playwright best known for his work during the Belle Époque from 1871–1914) farce. It will show in the UK early next year.

He talks with excitement about touring with Idle, and jokes about their inability to sell tickets in the “flyover states”, singling out El Paso, Texas in particular. There were three failed American attempts to remake Fawlty Towers – including one that wrote Basil out altogether – and I voiced my surprise that Americans appreciate his style of humour.

“You’ve got to remember they’re very different,” says Cleese. "Basically, they don’t have a sense of irony and I think that is closely related to the fact that they take such a literal interpretation of the bible. They don’t have much of a sense of humour but you have to say there’s exceptions.”

It’s clear that many of the Atomic cafe patrons recognise Cleese, and some listen intently as I sit back and listen to his stories. One passer-by interrupts us to shake his hand and thanks him “for all the laughs”. The interview over, we pose for photographs and he effortlessly drags me into position with him as he moves around, telling me to “smile as if I’m enjoying myself”. Of course, I already am.