Feminist figurehead Clementine Ford is bringing the fight to the Perth Writers Festival. At a time when it’s easier to be silent about the things that matter, feminist Clementine Ford is shouting. She’s shouting from the internet, morning television and, – following the debut of her first collection of essays, Fight Like a Girl – your local bookstore. Later this month UWA will become Ford’s newest pulpit when the Melbourne-based author, broadcaster and public figure appears at this year’s Perth Writers Festival (PWF).

Via her regular columns Ford and her strong opinions on modern feminism cut a divisive line through the media landscape. Her work has earned her a passionate fan base, a following equalled only by those who would rather she shut up and get back in the kitchen.

When the angry internet mob rallies to put her in what it believes is her place, Ford kisses it off with razor-sharp wit and some excellent GIFs. When someone threatened to take the fight to her home and commit unspeakable acts, she sent screenshots to his workplace.

In the lead-up to her PWF appearances, Ford touches on some of the topics she’ll be tackling while in town.

On the Perth Writers Festival
I’m really excited to finally meet [American writer and author of Shrill] Lindy West. We write about similar things and have been online friends for a while now. We’re doing a couple of sessions in Perth together.

Also Women of Letters – what an incredible event. It’s so beautiful what [founders] Marieke [Hardy] and Michaela [McGuire] have built. It takes a lot of dedication and I have a lot respect for those women for doing that. The women they’ve brought together to read amazing letters over the years … [it makes you] feel very privileged to be asked to be part of the stable. I feel like that when I’m sitting in the audience as well. It’s the art of storytelling that connects us all as humans.

On advice for beginner feminists
The advice I’d give to any woman starting to question things is to trust her instincts. If she thinks that there’s something not quite right, then she’s probably right. And people will try to tell her that she’s wrong. People will try to tell her that women are equal now, or that her experiences are ridiculous, or that she’s overreacting or that things didn’t happen the way she said they did or it’s all in her head: any number of different ways people have … over the years [used] to tell her she’s imagining things or that she’s crazy. And she has to know that she’s not. Her experience of the world is real, and it’s valid, and she has the right to talk about it.

On clicktivism vs activism
People need to be conscious of the fact it’s not enough to be active online. Yes, it’s great for raising awareness, great for signing petitions and stuff. I really think we need to go back to old-school people power, hitting the streets, actual face-to-face activism. We need that connection. It’s been incredible to see. It’s not just about clicking in the US at the moment, it’s going out to the airports and protesting, and I guess you just have to hope that the momentum is maintained. The downside to the online world is that we have such short attention spans now and it’s easy to lose interest in something, or think, “Oh well, I’ve done my bit now”.

On the rise of social media
I think social media is really powerful in that it’s the first time in history where women all over the world can connect without there being a middle person. The Women’s March was the largest global protest in human history. And the people are going to turn around and tell us that women don’t care about feminism anymore? That women don’t care about their rights and equality? The downside of social media is that we can sometimes think that that’s where activism ends, and it doesn't. That’s where it starts. We really need to be following through on offline movements.

On inclusion and infighting
I think that there’s an impulse now that really needs to be examined that yes, feminism has had an appalling history of being exclusionary, of not being intersectional. Thanks to the work of women of colour, of Indigenous women, of trans women, disabled women – all the different women that have been left out of the halls of feminism ¬– their work, their activism and their anger, feminism is trying hard to knead out those knots and find a better way to be inclusive for all women. That’s a really necessary part of the process and we all need to be on that journey. But I think one of the things I see happening more and more lately is white women only engaging in arguments at other white women. “You’re just a white feminist”. And I wonder how much of that is productive and how much is just mitigating their own guilt? It’s classic infighting within the movement. To be clear, I’m not talking about women of colour when they exercise understandable anger, I want to hear that, I want to understand that. We’re to listen to the genuine complaints of other people.

Because everything is there in print and to screencap as evidence, we’re expected to come to an argument with a fully formed position and start the question with the answer already in place. And that’s not how evolution works. That’s not how politics evolves. If they have the right intent, and if the will is there, we do have to allow that some people will make mistakes, because none of us are born perfect.

On the best cheese to share with your girl gang while you plot the downfall of the patriarchy
You can’t go past a really drizzly, disgusting-smelling brie. It’s got to be gooey. The best kind don’t even need a knife, you just scoop it out with a cracker.

Perth Writers Festival is held at UWA February 23–26. Clementine Ford is speaking on various panels. Tickets to the festival are available online. Fight Like a Girl ($30, Allen & Unwin) is available now. 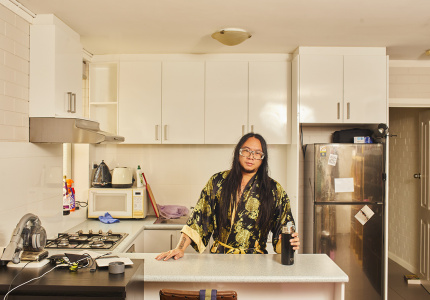