Produced by Broadsheet in partnership with Paramount Pictures Australia.

There are certain things you just can’t recreate at home. In partnership with Paramount Pictures Australia, which is releasing A Quiet Place Part II in cinemas from May 27, film critic Anthony Morris looks at why thrillers are best watched on a big screen with a crowd. As a film reviewer, I’ve been going to cinemas multiple times a week for my entire adult life. I’ve been to cinemas on their first day of opening and cinemas that are approaching 100 years old, cinemas with a dozen screens and cinemas that have just one in a hall barely the size of a school classroom. And every single one of them has been the best possible place to watch a movie.

It’s not just that it gets me out of the house – though in 2021 that can’t be underestimated. It’s not even a matter of sitting down in a comfy chair with a tub of popcorn (but that is pretty awesome). Fun fact: movie choc-tops are the best choc-tops. Also, I actually like cardboard stand-up displays, especially when you can stand behind them and look like you’re one of the supporting cast of Jumanji: The Next Level.

The audience reacts to what’s on the screen, and then they react to those around them, who are themselves reacting, and you get a feedback loop that sounds a little scientific until you realise it’s just what happens when everyone starts squirming in their seat because you’re all watching a thriller and someone on-screen just decided to investigate a strange noise outside.

Speaking of thrillers there’s absolutely nothing that hits the heights of movie-going like watching one with a crowd. A cinema full of people balanced on a knife’s edge is a fantastic experience. A jump scare watched at home just seems silly; a jump scare in a cinema where everyone else is jumping with you? The laugh of relief and embarrassment that comes out after that is worth the price of admission all on its own.

Watching a horror movie at home is just a great way to get creeped out by every little sound you hear – and at home a strange noise outside your window really might be something you need to check out (maybe that’s just my neighbourhood).

But in the cinema you have the crowd on your side, going through the exact same thing as you. You’re safe to relax and fully immerse yourself in what’s going on.

The thing that often gets lost with all the screens and entertainment options we’re surrounded by today is that a movie isn’t just a story told through sound and images. A movie is an experience, and the best place to have that experience is surrounded by other people in a cinema.

This article was produced by Broadsheet in partnership with Paramount Pictures Australia. A Quiet Place Part II is coming exclusively to cinemas from May 27. Get your tickets here.

Produced by Broadsheet in partnership with Paramount Pictures Australia. Learn more about partner content on Broadsheet. 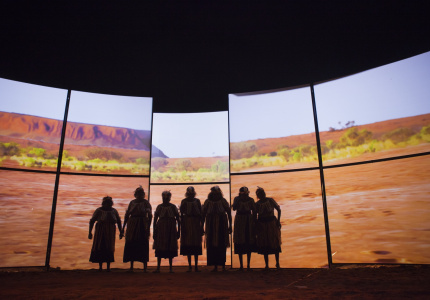