West of the Moon: Living in A Fairytale Care of a youth spent reading about girls who dressed up as knights and boys who climbed glass mountains, Clare Testoni prefers offbeat fairy tales to more conventional stories.

“They were always more exciting than the Disney stories,” says the Perth theatre maker and puppeteer. “I would think, ‘Why aren’t we all reading these? Why are we reading Cinderella when she’s so boring?’”

Testoni explores the history of fairy tales on Singing Bones, a podcast with more than 30,000 subscribers worldwide. Each day, she gets emails from listeners asking her to research particular stories. One of the most requested is East of the Sun, West of the Moon, a tale similar to Beauty and the Beast.

“It’s not the most mainstream but people remember it from their childhood: it’s one of my favourites,” she says. “I’m very passionate about Norwegian fairy tales as a collection, and the storytellers that preserved them.”

West of the Moon is Testoni’s adaptation of the Nordic story, and is her most personal work to date, combining her love of fairy tales with traditional theatre and shadow artistry. She is a professional shadow artist who has created puppets for the State Library of NSW, Sam Longley in Gareth of The Antarctic, and her own show.

“Body shadows give the impression of a person, we connect with them very easily,” Testoni says. “It’s almost like you’re turning a person into a storybook illustration so they move and they talk, but we don’t relate to them the same way we do humans.”

Although humans take on a different dimension in this story, West of the Moon isn’t just about escaping reality. It fits a traditional fairy tale within a modern context, including characters engaging in relatable relationships and having realistic reactions.

“Fairy tales tend to be grand, everybody is impossibly beautiful and brave,” says Testoni, who plays the show’s hero Boots. “What theatre does well is bring out the humanness in a story. I’ve made the romance a human thing, not an impossible fairy tale, without losing the magic.”

The writer herself likes to be swept away by theatre and kept this in mind through the production process. “I always wanted to live in a fantasy book as a kid, and I think this is the closest I’ll ever get,” she says. “Stories are an important part of who we are, and it’s exciting to keep telling them.”

West of the Moon is playing The Blue Room Theatre, Perth Cultural Centre from January 31 to February 4. Tickets are $20–$75, available online. 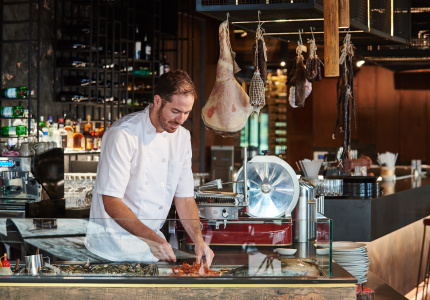