The team behind horror theatre show Séance return with a psychological thriller that plays on our worst fears. It’s just like being on a real plane, except that from the outset everything is, deliberately, a little bit wrong. And it gets worse. 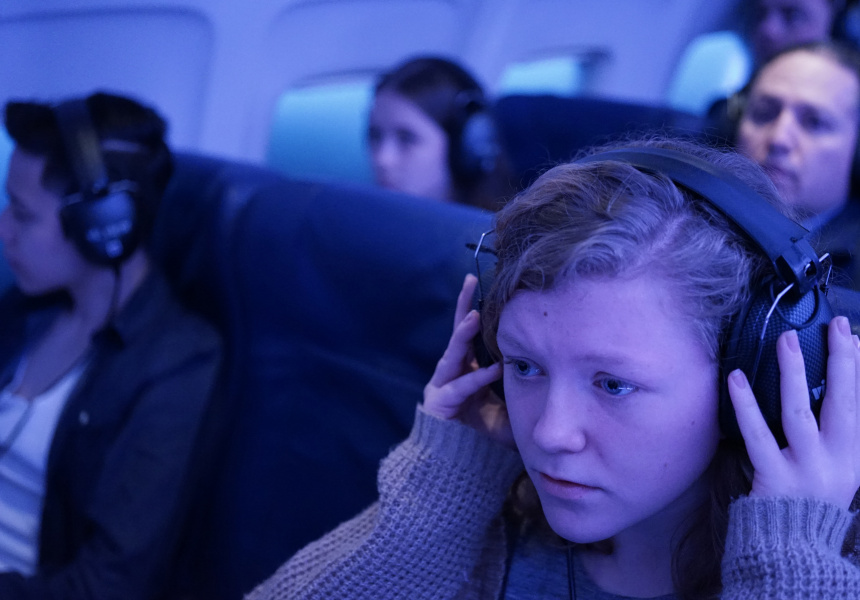 “If anyone is claustrophobic or scared of the dark, now’s the time to let me know.”

That’s our guide, standing in front of the shipping container we’re about to step into. As she scans the crowd, I grip the ticket in my hand just a little bit more tightly and avoid catching her eye. Secretly I am both of those things – what rational person wouldn’t be? Inescapable spaces? Not being able to see anything around you?

I think about raising my hand and saying, “Well now that you mention it, we’ve made a terrible mistake. Anyway, goodbye.”

But I don’t speak up, because in addition to being scared of the dark and a little bit claustrophobic, I am also a third, irrational thing: proud. I’m the sort of person who’ll go straight to the highest diving board to prove she’s not scared; who watches horror moves through gaps in her fingers, as though a slightly narrowed field of vision will protect her from the horror.

So as I stand outside the entrance to Flight – a new theatre show that simulates all of our worst fears when it comes to plane travel – I cling to the fact that this is theatre. It’s a carefully planned experience, right? That gives me just enough courage to make my way through the doors of the ominous white shipping container in front of me.

Once inside, it feels just like being on an aeroplane – even though we’re mere metres from a McDonald’s with hundreds of pedestrians streaming by – thanks to seats, overhead compartments and windows taken from a real plane. As you take your assigned seat a video starts to play, instructing you to look at the safety card placed in the seat pocket in front. Not a sound from the outside makes it through, and once you put your headphones on you feel completely removed from the world.

From the outset everything is, deliberately, a little bit wrong. There’s safety in numbers, so if you come with a friend, you’ll be separated. The video starts off normally enough – a stewardess talking through the usual aircraft safety information – but then the screen starts to flicker. Her outfit changes from blue to pink. The background changes. Normal intercom messages start playing, then become slowly more and more bizarre. Cat noises. The paging of a passenger “Schrödinger”. Then suddenly everything is dark.

Flight was brought to Australia by Realscape Productions, UK production company Darkfield, and Darkfield's founders Glen Neath and David Rosenberg. Terrifying experiences in shipping containers are kind of their thing – they’re the ones who also brought us the deeply unsettling Séance, which combines aspects of a traditional ghost-summoning scenario with sensory deprivation. Flight has already toured to Adelaide, Brisbane and Melbourne – and it's coming to Perth in January.

Neath and Rosenberg decided on a plane as their next setting, and they’ve recently launched Coma in the UK, continuing their run of taking already distressing scenarios and turning them into a disturbing form of entertainment.

“Flying is inherently unnerving, not only because you’re in a thin metal tube 30,000 feet up in the air,” Neath tells me, “but also because you’re locked in there with a bunch of strangers.”

As I sit in the dark with my headphones on, I’m ready for jump scares. Sudden noises. Whispers in my ears. That kind of thing. But it’s not the jump scares that make this experience so impactful. What makes Flight effective is the way your senses are manipulated.

I can’t tell if what I’m hearing is a recording or my fellow passengers. Lights flash on just long enough to show me something vague, while my imagination (I think) fills in the rest. Even though I know, deep down, that this is theatre, I find myself making myself as small as possible, double checking that my seatbelt’s done up. It’s fair to say my fight or flight response is fully engaged.

When it’s all over and the lights come on we’re ushered out. I unclench my shoulders, and I step back out into the real world. But then – just for a moment – I find myself wondering if this really is the real world, after all. What really happened in there? Because the scary thing about Flight isn’t what happens in the dark. It uses darkness to lean into the unknown, pushing through to the other side. And if there’s one thing scarier than darkness, it’s what happens after you’ve crossed to the other side – the unknown.

Flight runs from January 17 to February 16 at Perth Cultural Centre in Northbridge. Tickets are available online.