A different kind of corporate event. 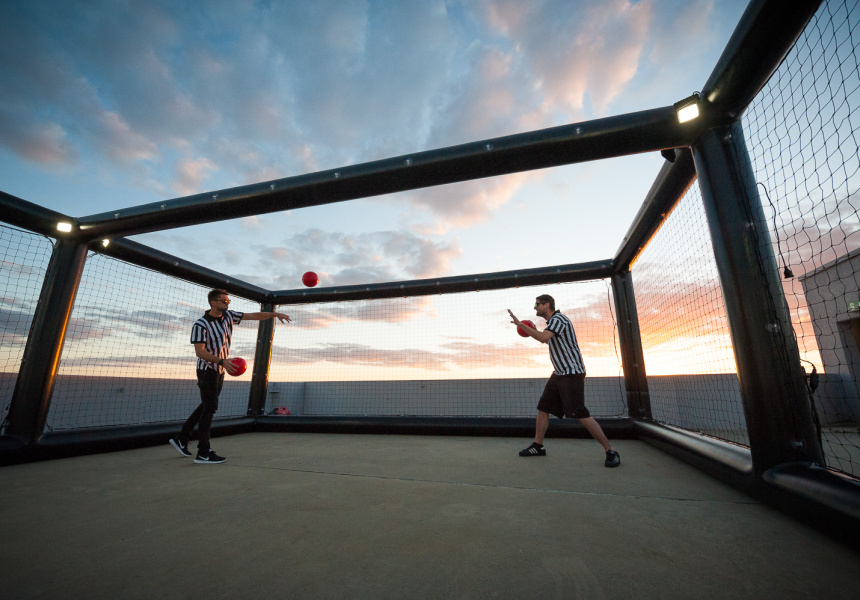 Dodgeball as a team-building and corporate-entertainment exercise? That’s what Jimmy and Mikee Kinsella, the brothers behind Dodgy Bros Dodge Ball Co., are hoping.

“I tried to come up with a few different events people hadn’t heard of before,” says Jimmy, who thought up the idea while brainstorming social events for his lacrosse team. “Dodge ball was one of them.”

Nets were strung up in the clubrooms for the first event and its popularity gave Jimmy the idea to run it for other clubs.

“We couldn’t just keep stringing up nets everywhere,” says Jimmy. “So I came up with the idea for the inflatable arena.”

Custom-built in China, the inflatable arena takes 10 minutes to erect and is around the size of half a basketball court. Party lighting and a smoke machine is added for night-time events.

At game time Jimmy assumes the role of referee, while Mikee, who DJs around Perth, plays tunes.

The rules, for those unfamiliar with the game or Ben Stiller’s DodgeBall, are straightforward. Teams of five line up at opposite ends of the arena and each team is given two balls with one ball in the centre. Everyone starts with one hand on the back net until Jimmy blows the whistle and then there’s a rush for the fifth ball in the middle.

If you get hit by a ball on the full, you’re out. If you catch a ball on the full, the person who threw it is out, plus one of your eliminated team members gets to re-enter the game. Last team standing wins that round. Then it’s best of three for the finals.

A word of warning: players who get a little too in touch with their inner White Goodman will be on the receiving end of a different sort of shot.

“We have the microphones, so we’ll sort those people out with some light-hearted ribbing,” says Mikee.

Dodgy Bros Dodge Ball Co. is holding its launch event tournament at The Game Sports Bar, 90 Aberdeen Street, Northbridge from 7pm on Saturday September 3. Entry is $60 per team and teams must be mixed. Entry for spectators is free and there will be prizes for winners and drink specials throughout the night. Dodgy Bros Dodge Ball will also be at the BeauVine festival between October 21 and 23.