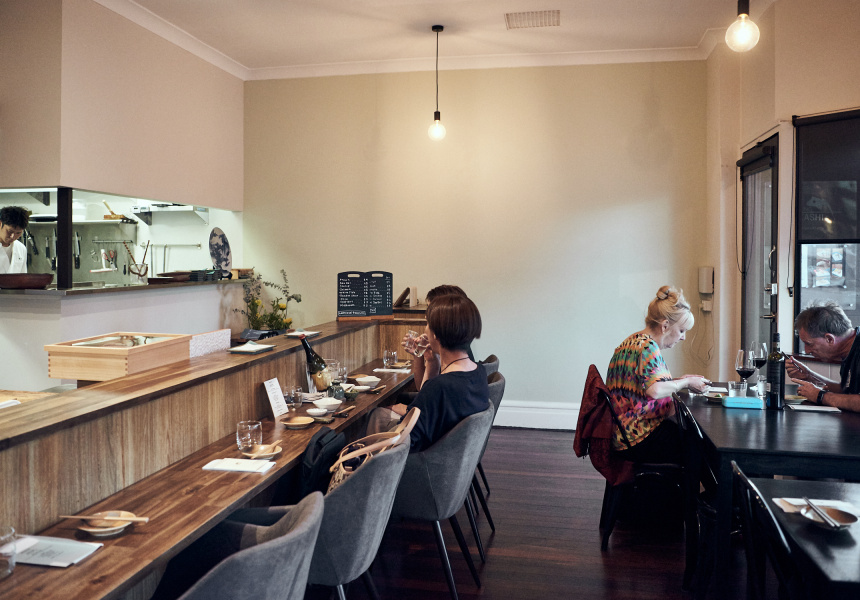 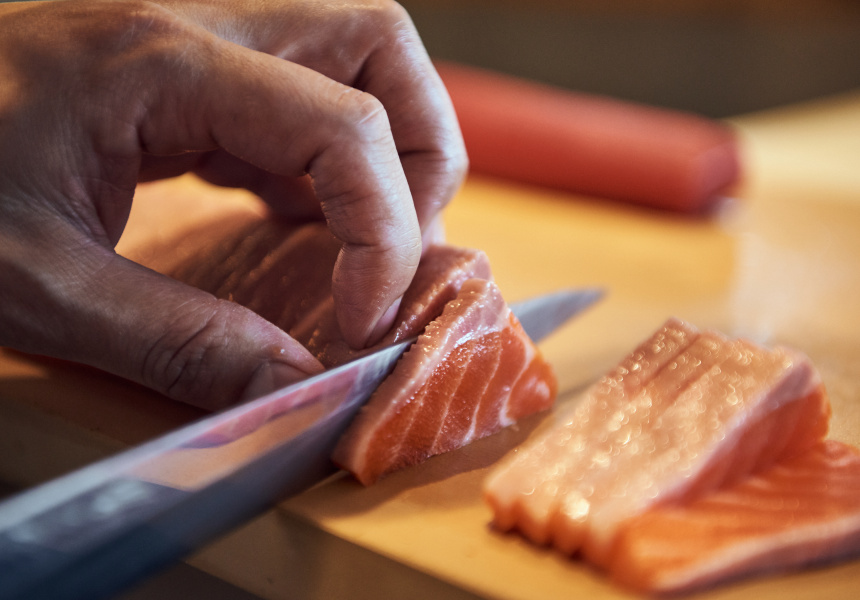 Dining Akashi is owned and operated by wife and husband team Miki and Makoto Mitani, restaurant manager and chef, respectively. A native of Akashi (a city in Japan near Kobe), Makoto’s early experience included time at a hot spring ryokan (Japanese inn) in Kobe as well as a specialist sushi restaurant in Akashi where, among other things, guests chose live fish from a pond and Makoto and his team would prepare them as startlingly fresh sashimi. His previous Perth postings include sashimi chef at the Boatshed Market; the sushi counter at heavyweight izakaya James Parker, and Mount Hawthorn’s Ha-Lu, which is where he met Miki.

If Makoto-san’s CV is extensive, the BYO restaurant he and Miki opened is anything but. As the seating capacity suggests, Dining Akashi isn’t a big place. The first thing you see when you enter the former cafe is the six-seat chef’s counter. Eight more guests can be accommodated at tables throughout the sparsely decorated space but – in Japanese dining tradition – the best seats are right with the person cooking dinner. An all-jazz soundtrack helps counter the roar of the Canning Highway traffic.

Although Akashi offers a la carte lunch, evenings are prime time because the restaurant offers two set menus: Otegaru ($50) – various appetisers, tempura and sides – or Akashi ($75); the same menu as Otegaru with additional sashimi and tempura plus a dessert (a green matcha pudding, say). If you can, budget the additional money and time for the latter.

While the golden tempura is worthy of its star billing (on a recent outing, deep-fried local sand whiting, Shark Bay tiger prawns and goldband snapper all featured: hungry and/or greedy guests have the option of ordering additional tempura by the piece), the rest of the menu is no afterthought. Dishes rotate each month. A particular highlight is the curry, all long-simmered Wagyu beef and cinnamon and ginger spice and a five-mouthful bowl of comfort, happiness and gentle inventiveness.