Produced by Broadsheet in partnership with Antarctica Flights

You might not be able to set foot on another continent right now, but that doesn’t mean all travel plans have to be cancelled. In partnership with Antarctica Flights, we talk to a flight manager who organises journeys to the last untouched landscape on Earth. 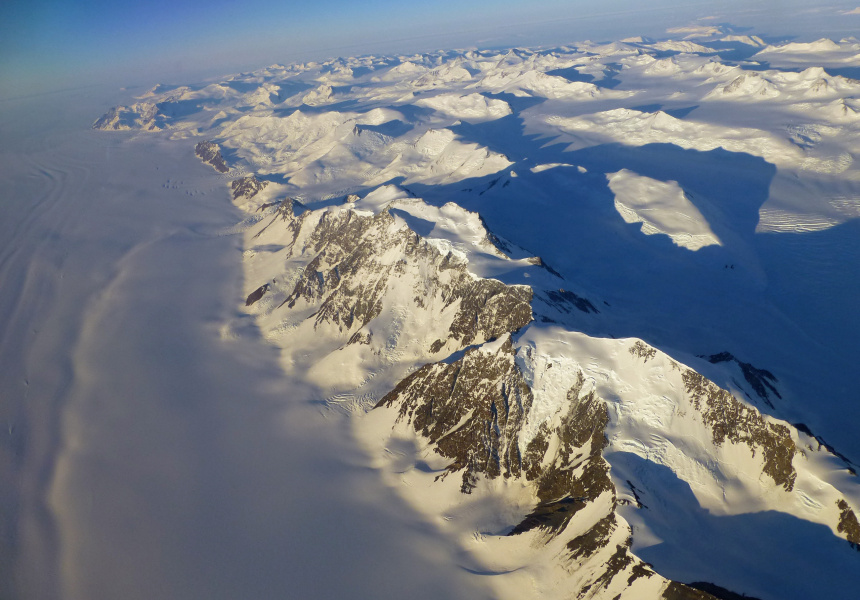 Bas Bosschieter has been to Antarctica about 50 times. He flies over it several times a year in a jet with just a few hundred other people. Each time he gets to see the continent’s vast mountain ranges; sapphire blue icebergs (in water clear enough to show the icebergs’ mammoth interiors); and ice-capped volcanoes billowing smoke. Each time he gets to experience the sheer grandeur of Earth’s last untouched landscape.

He gets to do this because he’s a flight manager with Antarctica Flights, the only company in Australia that runs scenic flights to the continent. But he doesn’t have to go multiple times a year – he’s not a pilot or one of the scientists who do the in-flight talks – he chooses to go. “Life on board is great,” he says. “It’s extremely rewarding.”

The company has been running the flights – a return trip of approximately 12.5 hours – since 1994. Here’s how it works.

The journey there
About four hours (includes brunch).

The trip there is a bit like pre-game drinks before a final – you read the previews, get to understand the people involved and generally just get jazzed before the main event. Same here: every flight has a scientist who shares stories about their experience living in Antarctica, and the in-flight entertainment is loaded with Antarctic documentaries, of course. Brunch is provided, and there are snacks and drinks just like any other major international flight.

It’s quite a view, from 3000 to 4500 metres up in the air. That distance may at first seem pretty far from the actual continent, but consider this: Antarctica, which has never had any industry on it (and hardly any vehicles) has the best air-quality on Earth. And the average altitude of commercial flights is about 10,000 metres.

Factor in the heights of some of the mountains you’ll fly past – Mount Melbourne (2733 metres); Mount Minto (4165 metres); and Mount Erebus (a 3794-metre active volcano) – and you begin to get a sense of how close you’ll be to some of the most stunning geography in the world. Bosschieter has seen a volcano unexpectedly coughing up smoke, like a gargantuan dragon with a cigar habit. “When we fly near a mountain, it really feels like you can reach out of the plane and touch them,” he says.

Any time the plane approaches a mountain, iceberg or landmark, the captain will circle the site, capturing all the angles to ensure all passengers get a suitable ogle. Unlike on commercial flights, which travel straight from point A to point B, here the pilots have the freedom to explore the air as they wish. “It's pretty much a joy flight for them; these guys are literally working manually to find good patches of great sunlight,” says Bosschieter. “Of course, flying at those altitudes and doing the figure eights, they love that.”

The most spectacular thing Bosschieter’s seen? The icebergs. “Sometimes when the sun is just right, you can see the bottom tip of an iceberg, it’s just incredible. We could see 30 metres below the water line, this golden turquoise colour going into the water. It’s one of those images that’s just about impossible to describe.”

The journey back
About four hours (dinner included).

If the trip there is the pre-game session, this is the afterparty. “People meet the people next to them, they have a drink, everyone is sharing photos,” Bosschieter says. And not just the passengers. “The great thing about having three captains on board [is] they’re very enthusiastic about getting out and speaking to people. So many people have questions about the aircraft, and [the captains] really make themselves accessible to the people on the flight. It plays a major part in the atmosphere.”

This is a huge drawcard for air-travel enthusiasts, who get a rare chance not just to meet some pilots, but also to gain insight into the mechanics of aeroplanes and flight. “When we take off and land, they’ll have the air-traffic controller paged through to the main cabin so everyone can hear everything as if they were in the cockpit,” says Bosschieter.

Some years they’ve even had family members of early explorers of Antarctica on the flight with memorabilia from those expeditions, which guests are able to see up close.

For Bosschieter, the main purpose of running a flight service such as this is to educate people about Antarctica and the environment. “Let’s protect Antarctica, the last great wilderness,” he says.

Antarctica Flights is now running scenic flights from most Australian capital cities aboard a Qantas Dreamliner - including a festive New Year’s Eve flight. Be one of the first to ring in the New Year - in broad daylight. More information and bookings here.

This article is produced by Broadsheet in partnership with Antarctica Flights.

Produced by Broadsheet in partnership with Antarctica Flights Learn more about partner content on Broadsheet.