Watch the weather wash over the undulating landscape from a huge bedside picture window, while you’re cocooned in front of a roaring fire, or as you take a steamy outdoor shower. It’s around an hour from Melbourne on the site of a former dairy farm. 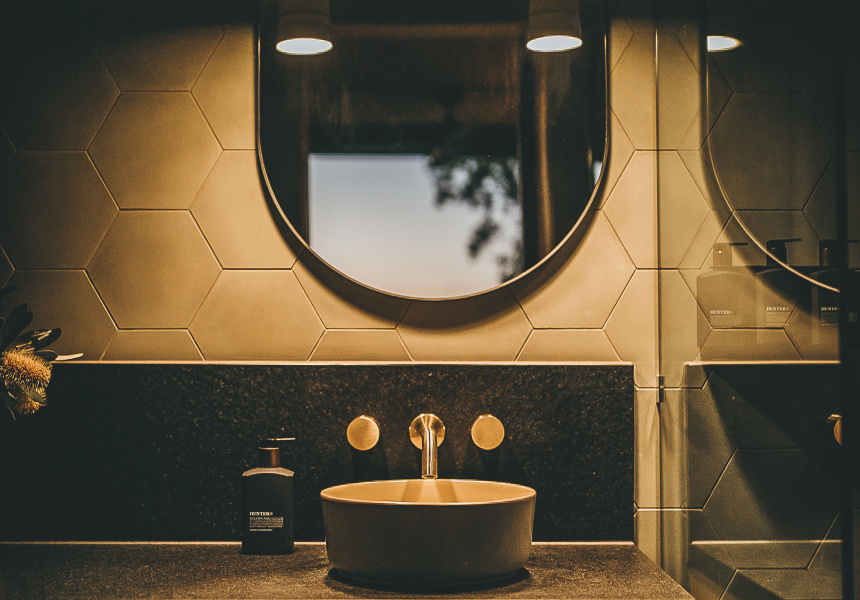 Deep within Victoria’s Dandenong Ranges, around an hour from Melbourne, is a new luxury hideaway – flanked by undulating hills, dense forests and fern gullies.

Larnook is the creation of Victorian couple Paul and Michelle Rowse, who in 2017 clocked up more than 40,000 kilometres on a “big lap” of Australia, hooking up an off-road caravan to their decades-old Landcruiser and just hitting the road.

They returned home with plans to build a series of off-grid getaways where the camping-averse could escape the tedium of the daily grind and get back to nature with all the creature comforts (and then some).

Larnook at Sherbrooke is the first and, after a weekend stay, here’s what got us hooked.

The vantage point
Waking up to the sight of a greenery-blanketed valley (through a huge picture window right alongside the raised, linen-draped king-sized bed) really did it for me. The hilltop location is – and I don’t use this word lightly – breathtaking. A close second: the floor-to-ceiling glass sliding doors that open the entire space up to the outdoors. This is one of those places where just watching the weather wash over the landscape can entrance you for hours. During my stay, it oscillates between beaming sunshine and all-encompassing fog – with a beautifully deafening hailstorm thrown in. On a clear day, Paul says, you can make out the ships bobbing on Port Phillip Bay, while the glistening lights of Cowes on Phillip Island can usually be seen after dark.

The (literally) chequered history
Sheltering the cabin from the road is a weathered corrugated-iron shed that adds to Larnook’s charm. But it hasn’t always lain dormant as it does now. “As we understand it, the site was a working dairy farm from the early 1900s through to the late ’50s, early ’60s,” Paul says. This included a cheesemaking operation in a black-and-white-tiled room, which you can see if you peer through one of the windows. Now the rambling property is a flower farm, yielding a number of varieties throughout the year, but most notably daffodils (they bloom from late June to early September).

The not-so-tininess
Comparable cabins can really test your tiny-living limits, but the thing about Larnook is it’s actually not that tiny. Instead of a single shipping container, it’s two clamped together, which means there are plenty of potential relaxation stations. In the front container is a lounge room with a cushy two-seater couch and a roaring gas log fire (that can heat the place quick smart), as well as a decently sized kitchenette and dining area. The back container holds the bed, bathroom and a cosy sitting area. Then there’s the large deck, which leads down to a perfectly placed wood firepit.

The shower situation
With brass fittings, green hexagonal tiles and louvre windows that open into a plant-filled alcove, the roomy indoor shower is lavish enough. But outside – on a slightly sunken square of decking – is a second, open-air shower with the same incredible pressure and hot-and-cold capability. That makes it just as good for a cooling rinse-off on a summer arvo as it is for a steamy, under-the-stars session on a frosty night (I’d recommend warming your towel in front of the fire). Also important to note: you’re almost entirely secluded, but bring your togs just to be safe.

The all-important eco element
It’s not all looks, no substance here. Atop the shipping containers is a pavilion roof covered in solar panels, with additional surface area for rain collection. Larnook is powered by solar and batteries, and there’s a grey-water treatment system used to water the surrounding plants, which Paul says keeps all the amenities running at an “extremely low cost”. There’s also a composting toilet, which – while not the most extravagant feature – Paul says is “an essential part of being truly off-grid”.

Stays start at $395 per night for a maximum of two people, and there’s a two-night minimum on Fridays and Saturdays. The address is provided just before your stay. 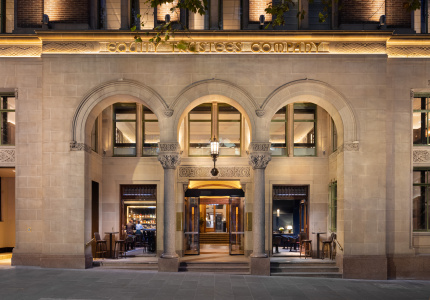