A Weekender's Guide to the Gold Coast

The Commonwealth Games: you may not care about them, but you need to start caring about Australia’s sixth largest city. You probably have some preconceptions about the Gold Coast. Broadbrush tourism, flippant glamour, conspicuous displays of wealth. Maybe a white shoe or two.

It’s true that in the 1980s, ’90s and ’00s it was a bit of a basic boom town. Tourist numbers climbed along with ever-taller high rises; new residents flocked to the strip for a flashy take on a sea change.

Then the Global Financial Crisis blew through the city. The steady stream of visitors became a trickle, a surging Australian dollar only compounding the pain. But the GFC also forced the city to reckon with itself. It swept away tired operators and dusty developments, and the region started to look inward to its own communities for growth.

It was around the time the Gold Coast won the bid to host the Commonwealth Games in late 2011 that the city’s stupor looked terminal. Now, it’s transformed. A new wave of independent bars, cafes, boutiques and restaurants has washed over the strip. There’s the busy precinct of Burleigh Heads, hidden in the arcades and lanes surrounding James Street; or the clutches of speakeasies and casual eateries dotted along the Gold Coast Highway in Mermaid Beach.

When Broadsheet catches up with Courtney Atkinson he’s not on the Gold Coast. He’s 1100 kilometres away on Whitehaven Beach, a Channel 7 film crew in tow. Atkinson is here running a leg of the Queen’s Baton Relay for the Commonwealth Games, ostensibly as a Mackay local. But the 38-year-old former Olympian has lived on the Gold Coast since he was a boy. He’s noticed a remarkable change in recent years.

“It’s just over the past five years,” he says. “We’ve gone from being a tourist hub to being a proper mini capital city. There’s still the strip, but it now goes kilometres inland, and you get this whole different range of people. These are locals who want something different to eating a parmigiana at the surf club.”

Atkinson lives in the suburb of Mermaid, right in the guts of the Coast. He reckons one of the most telling aspects of the city’s maturity is that day-to-day he barely has to leave his neighbourhood.

“There’s so much variety now. It’s almost like you have these villages or boroughs on the Coast,” he says. “I can drop my kids at school and head to Grocer & Grind for a coffee or breakfast.”

Not far away is another of Atkinson’s favourites, Donto Sapporo, which he says taps into the city’s rich modern history of Japanese cuisine. “The Japanese community on the Coast is so strong,” he says. “You can walk in there and it’s as authentic as sitting in a restaurant in Osaka … There are all these little spots that you don’t hear about if you stick to the main strip.

“But there’s that real layered mix on the Coast now, from prior to GFC to post with all the cafes and new-wave restaurants popping up,” he continues. “You can go for a surf and then hit Bam Bam Bakehouse for coffee and a chocolate croissant; or after training a lot of people often go to Piccolo, [ex-cyclist] Robbie McEwan’s cafe.

“With the [Commonwealth] Games, the injection of business will be limited,” Atkinson says. “But having the infrastructure its brought with it means there’s a great opportunity to hopefully bring back visitors who previously thought, ‘Why would you go to the Gold Coast?’”

Lupo
Lupo is the quiet achiever among a hotbed of hyped restaurants in Broadbeach. A change of pace for the Gold Coast, chef Harry Pearce builds his always-changing menu from Spanish and Italian influences and tosses it all through a woodfired oven. Food is backed by a quality wine list favouring minimal intervention.

Etsu
Ever wandered around Shinjuku in Tokyo trying to find that elusive izakaya you were recommended? Etsu is much the same, hidden in plain view on the Gold Coast Highway. No signage and a rickety old barn door opens up to a buzzy, rambunctious Japanese restaurant. Take a seat at the bar for a plate of sashimi and a crisp Japanese beer or grab a booth with friends and leave it up to the chef with the omakase menu.

Rick Shores
Rick Shores has by now established itself as one of the Coast’s premier dining spots. The restaurant takes the current share-plate mantra and executes it perfectly with clever and concise Thai food. The location does the rest – you can literally step off the beach here and sit down at a table.

Après Surf
Much like its mountain bar namesakes, Après Surf is the perfect spot to rest your weary legs and assess the sunburn after a day at the beach. A classic Aussie pub condensed into a small bar with a focus on genuine service, Après Surf has fostered an incredibly loyal following since opening in early 2016. Grab a counter meal and a schooner of Balter and settle into this new breed of Gold Coast watering hole.

The Scottish Prince
From the folks who brought you The Cambus Wallace in Nobby Beach, The Scottish Prince takes that venue’s seafaring vibe and dedicates it to whisky. The result is a cozy and comforting venue where it’s easy to mingle with the locals. There are more than 200 different whiskies behind the bar, so don’t be shy.

Currumbin Surf Club
An often overlooked institution on the Coast, the Currumbin Vikings Surf Club is well-acquainted with both the delights of its location – unrivalled sunsets on the balcony – and the downfalls when the wet season rolls around (see also, Rick Shores). Become a member for cheap schooners and cracking daily specials.

Aloha Bar and Dining
Two years since it supposedly “popped up”, Aloha Bar and Dining is still here, winning the hearts of those clever enough to find its backstreet Broadbeach premises. You can eat here but it’s the drinks the capture the imagination – particularly the famously potent cocktails. The paraphernalia-lined venue itself provides the rest of the charm.

Paddock Bakery
Paddock has become an institution since opening in a fabulous Miami weatherboard house in 2014. The secret to its success is a straightforward approach: quick, tasty breakfasts and flawless pastries. Fair warning: this place gets busy, but when the result is this good you’ll hardly care.

Canteen Kitchen
Canteen in Burleigh was one of the first to light a fire under cafe culture on the Gold Coast. The menu is a simple offering of Middle Eastern fare for both breakfast and lunch, accompanied by the cafe’s a signature blend of coffee under the “Canteen” brand. If Swiss-precision consistency is key when it comes to the lifespan of a cafe – and it certainly is in ultra-competitive Burleigh – Canteen can’t be faulted.

No Name Lane
Prompted by the realisation its loyal patrons enjoyed Espresso Martinis just as much as they enjoyed espressos, No Name Lane last year earned itself a liquor licence. Now it transforms itself from a bright, breezy Broadbeach brunch spot during the morning into a boozy bolthole with share plates for cocktail hour. The coffee theme extends to a bunch of other cocktails, including a Turbo G&T with gin, cold brew orange peel and tonic.

Barefoot Barista
A block west of Palm Beach, this terrific little cafe peddles a short, efficient menu of wholesome breakfasts and lunches backed by expertly made Gabriel espresso. Where to sit? Out back in the green courtyard is best.

Cafe Dbar
Sitting pretty above Point Danger in Coolangatta, Dbar is a cafe, shop and gallery all in one. Coffee and breakfast after a surf is a must but there’s also a wide selection of works from local artists, including landscapes, portraits and out-of-the-box pieces. The shop is just as good, selling homewares, clothing and boutique surfboards.

Palm Beach Surf Store
If there’s been a payoff from the demise of the big surf brands, it’s the birth of retail outlets like the Palm Beach Surf Store. Here you’ll find genuinely welcoming service, local knowledge and just good old-fashioned friendly advice. The shop stocks everything from surfboards and fins to sun protection.

Clubhouse Records
For those who like their crate digging with a side of espresso, Club House Records occupies the front area of the Surf City shopfront on the Gold Coast Highway. There’s no overload of Kamal here, just a huge variety of vinyl divided into soul and funk, rock and psych and alphabetised classics. Hula girl Espresso is on-site for all your coffee needs.

Cornerstone Stores
Cornerstone Stores is a new boutique retail and lifestyle space that pleasantly surprised everyone by not being a block of units when it was erected towards the end of 2017. Ten individual businesses make up the Richards & Spence-designed precinct, ranging from florists to modern retail and beauty. Stand-outs include Quince Fromagerie – one of the few spots on the Coast where you can get a decent bottle of wine – and Stable Coffee & Kitchen, which is a little like Brisbane’s Botanica but with a cafe menu and booze options.

QT Gold Coast
A game changer when it opened almost seven years ago, QT moved into the former digs of the iconic Gold Coast International – the city’s first five star hotel – and turned it into a 1950s-inspired beach resort. The hotel has a happy engagement with its history but it's still very much a modern experience, from the crisp, bright rooms right down to Stingray Bar – a buzzy nighttime haunt for guests and locals alike – and recently refurbished Yamagen restaurant. 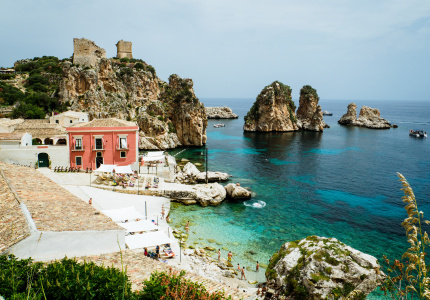