Your road trip waiting to happen. 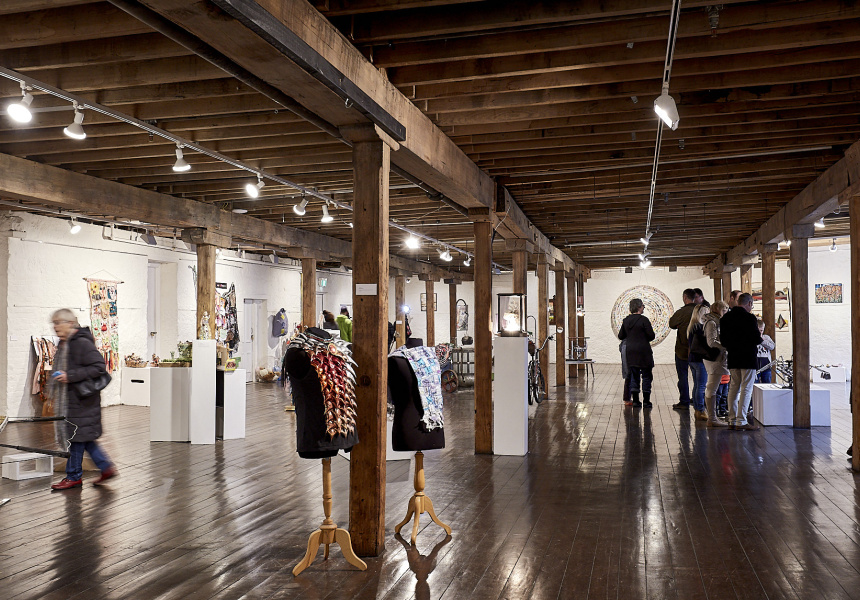 It’s not all about MONA. Well, it’s partly about MONA – that inverted pyramid, an underground temple of sex and death, has brought countless visitors to Tasmanian shores. But our itinerary has stops showing other cultural highlights, both now and in the far past. And if you’re going to road trip around Tassie, it makes sense to take your own car. Spirit of Tasmania makes it easy - ready for you to drive off when you arrive at the Devonport docks. Here’s where to venture.

Established in 1977 by Gary Cleveland, Design Tasmania intends to make Tasmania synonymous with good design – and mostly, it does just that. One half of the building is all modernist gallery, with year-round exhibitions dedicated to interiors and architecture. The other half is a converted hall, where you can buy wares from local artisans, designers and craftspeople such as Mabel Design, Rynne Tanton and Indeco. Good thing you brought the car.

With all that art and shopping, you’ve earned yourself a drink. A drink in a piece of svelte modernist architecture, no less. Devil’s Corner in Apslawn on the east coast is Brown Brothers’ Tasmanian outpost. Built from metal and local timber, the new cellar door was designed by Hobart’s Cumulus Studio, which is built around a central “food market” and courtyard space.

From there, you can look out over the Hazards and Freycinet Peninsula with a freshly shucked oyster from Freycinet Marine Farm, or a wood-fired pizza from the Tombolo Cafe. Oh, and, they serve wine too – nine different varieties, including a chardonnay, pinot noir and an affordable NV cuvee.

Once you’re refreshed from your visit to Devil’s Corner, head south toward Hobart to the small village of Campbell Town. There, landscape artist Luke Harvey and his wife Keryn have set up a gallery – and a home. On one wall is a series of oils depicting 81 landscapes inspired by the Tao, along with his own written reflections. On the other are more recent paintings, which are available for sale through the gallery. Luke also uses the room as his studio, where you can see him at work on his latest landscape.

Gallery 81 is also a licensed cafe, so you can look out over the nearby hills with a glass of wine or a cup of coffee.

Now, it’s time to bring out the big guns – which, in one exhibition at the Museum of Old and New Art in Hobart, is literally a Big Gun. There are Egyptian mummies and ancient Roman coins, but there's also Untitled (bowl & fish), featuring two live goldfish swimming around a butcher's knife, and the artwork, Cloaca, a machine that makes an approximation of human faeces. Anselm Kiefer filled a room with metal and broken glass. There’s a 19th century monkey skeleton in a rocking chair. In a bunker by the river are stacks of recordings of the artist Christian Boltanski – whose entire life is the legal property of David Walsh.

So yeah, you might be offended. But you’ll also be entertained, provoked, and sometimes even quietly moved in what is the most idiosyncratic gallery you’ll ever visit. It’s the best.

Australia’s First Nations people have been in Tasmania for at least 35,000 years, and by some estimates as long as 70,000. Their artworks are inscribed all over the island, but in Hobart, Art Mob Gallery is dedicated to displaying contemporary work. Works come from all over Australia, and feature artists such as Fiona Omeenyo, Hilda Nakamarra Rogers and Natalie Puantulura.

There is a wide variety of paintings for sale, as well as sculptures and carvings. And, if you don’t know anything about Aboriginal fine art, the curators and gallerists at Art Mob are keen to help you out.

While often overshadowed by its younger sister MONA, the Tasmanian Museum and Art Gallery (or TMAG for short) should be a compulsory visit. A museum-gallery hybrid, the recently redesigned institution has equal parts historical artefacts, natural history and artistic works. Alongside fascinating examples of Tasmanian fauna – including the forlorn figure of a Tasmanian Tiger – is a collection of Colonial paintings, a historical guide to Antarctic exploration, and a strong survey of the island’s Indigenous heritage.

There is also a range of contemporary exhibitions – for instance, at the moment there’s a selection of cute illustrations from Winnie the Pooh (don’t worry, it’s not the same thing that’s at MONA).

Once you’ve had your fill of Hobart’s bristling art scene, jump back in the car and make your way north through the centre of the island. In about an hour or so you’ll find Bothwell, a strange little town that seems to have slipped from a wormhole into Georgian England. Built on the River Clyde and named after a town south of Glasgow, there are more than 50 buildings with heritage classification in the village. The Australian Golf Museum is housed in an old school house built in 1887, next door to the Presbyterian Church, which was completed in 1831. The Castle Inn is the second-oldest pub in Tasmania, continuously serving pints since 1829 (the Boags Draught is still good, believe us). Nearby is the Nant Distillery, which not only helped kick off Tasmanian whisky, but its estate has been in the region since 1821. For the full colonial experience, stay in White’s Corner, itself a heritage homestead, which will definitely make you yearn for a fireplace in your own bedroom.

From Bothwell, make your way – as slowly as possible – back through the centre of the island and on to Devonport. If you’re not strapped for time, head west through the Franklin-Gordon National Park, which is the drive of a lifetime. But, eventually, you’ll end up at the port, where the Spirit will be waiting to carry you back to the mainland.