Switch Off at In2thewild’s Newest Tiny, Off-Grid House on the Outskirts of the Grampians

It’s plonked in the middle of a lush property, surrounded by rolling hills. And there’s limited phone reception – so you can properly unplug. 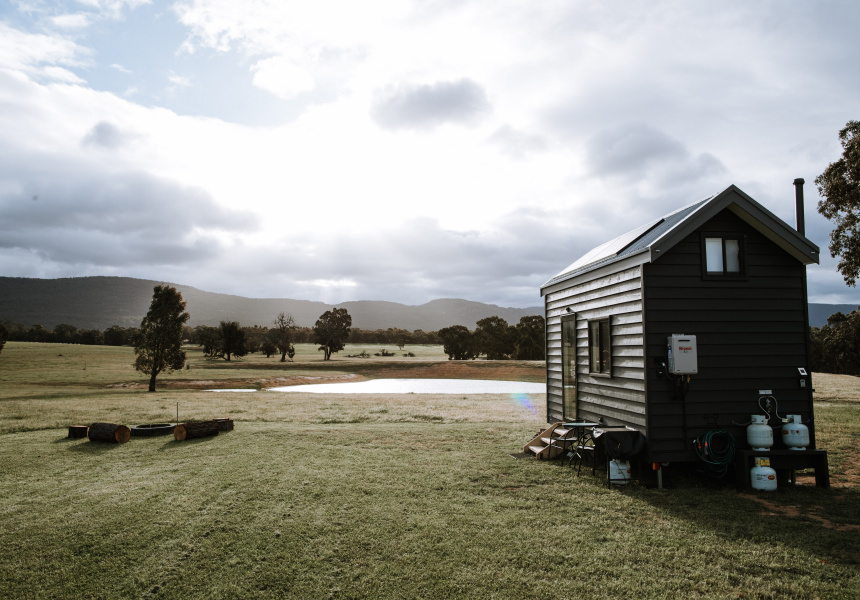 Photography: Courtesy of In 2 the Wild / Ed Sloane
1/14
by Tomas Telegramma
Share

Just days before those in metro Melbourne are expected to be able to travel to regional Victoria again, a newcomer has joined the fleet of tiny houses run by off-grid-accommodation specialist In2thewild.

Take a cruisy two-and-half-hour drive north-west of Melbourne, and that’s where you’ll find it – plonked in the middle of a lush property on the outskirts of Victoria’s Grampians National Park, near the town of Pomonal.

Now, a tiny house may seem like a slightly constricting choice for a post-lockdown getaway. But what this little lodging lacks in indoor space is more than made up for in the wide-open space, and rolling hills, surrounding it. And there are huge windows that let you take it all in.

The house comfortably sleeps four, with a queen-sized bed in the loft, and two single beds downstairs. There’s also a full bathroom (with a hot shower, importantly) and a heater and fans for all-season comfort. And while the kitchen is completely decked-out, you’ll also find a barbeque and campfire outside, as well as deckchairs to sink into.

One creature comfort that’s limited, though, is phone reception, which – after a year of Zoom meetings, catch-ups and knock-offs – makes this the perfect spot to switch off. Instead, find plenty of books and boardgames to keep you occupied (or BYO).

Or you can think of it as your home base, and explore the breathtaking hikes, topnotch restaurants and wineries, and quaint country towns, which are only a short drive away.

The very first In2thewild house is named Christopher after the young adventurer from the film Into the Wild. This one, Elliott, shares its name with the alien-befriending boy in E.T. the Extra-Terrestrial.

In2thewild currently has 21 tiny houses across Australia – six in Victoria, 14 in New South Wales and one in Queensland.

Prices start from $299 per night and there’s a two-night minimum stay on Fridays and Saturdays. Book online.