A Summer Road-Trip Guide to the Fleurieu Peninsula

A laid-back seafood shack right on the beach; an eccentric cellar door in a 19th-century cottage; a secluded hilltop glamping experience; one of South Australia’s most beautiful swimming spots; and more. In partnership with Airbnb, we make a break for the Fleurieu. 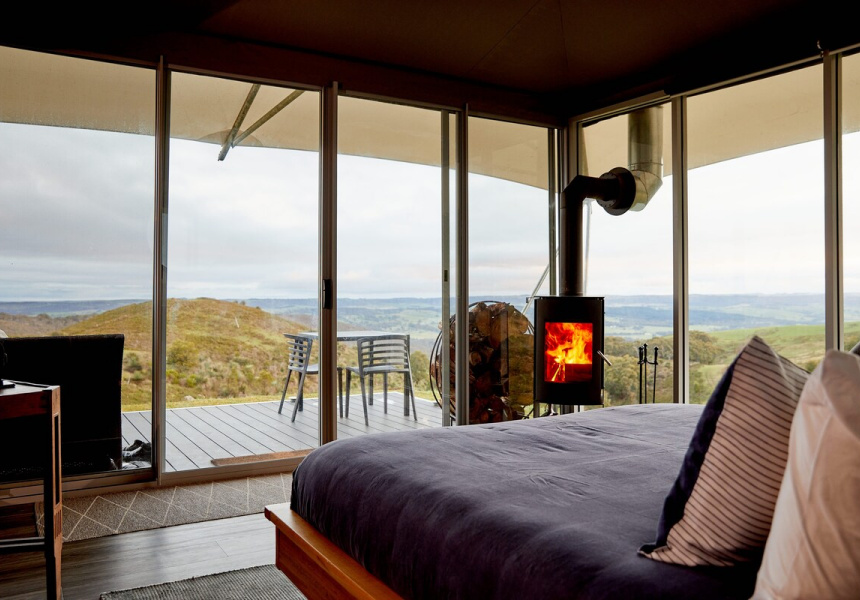 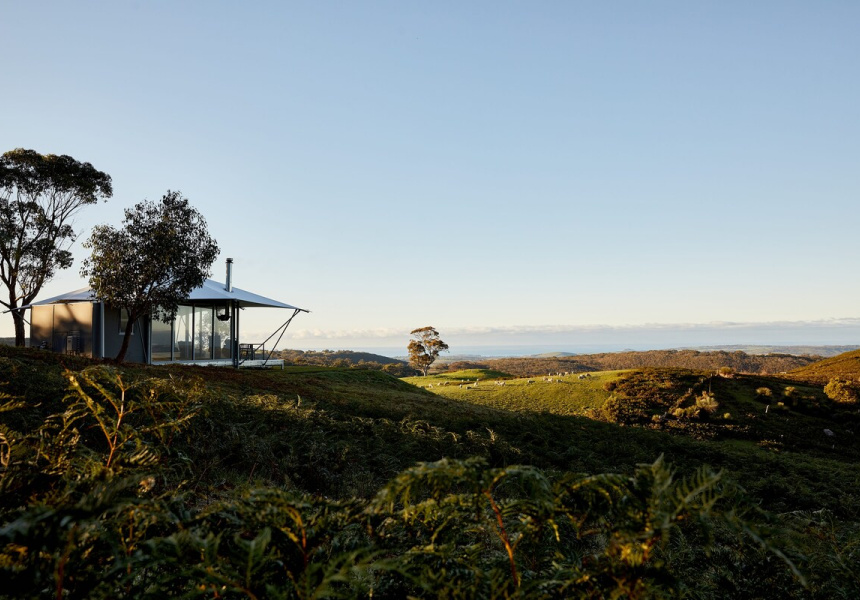 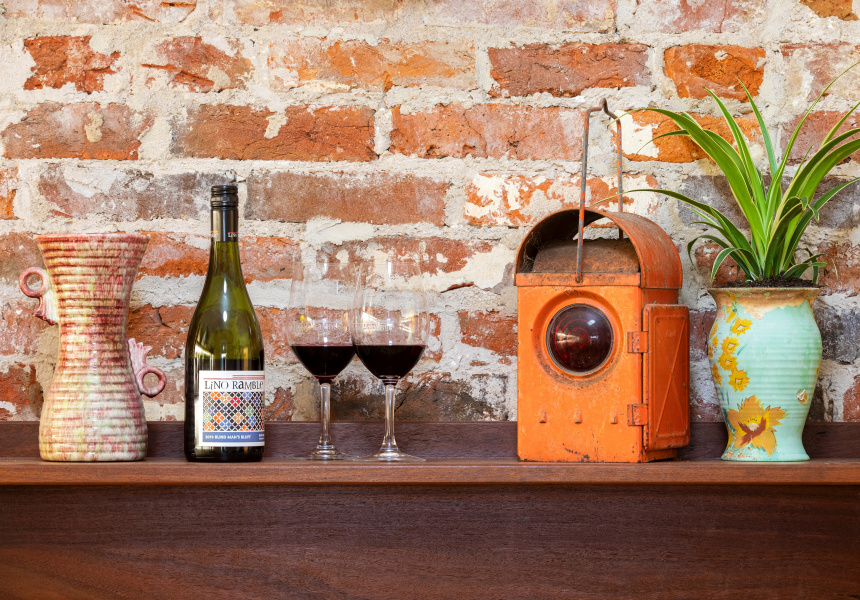 South Australia’s Fleurieu Peninsula, only an hour or so from Adelaide’s CBD, may just be one of the best regions in the country for a summer road trip.

Here, you can quite literally have it all. In half an hour behind the wheel, go from celebrated restaurants and world-class cellar doors in the McLaren Vale wine region, to pristine white-sand beaches and sweeping conservation parks on the rugged coastline, to seemingly off-grid accommodation that’s just minutes from the nearest town.

So, whether you’re after a culinary, coastal or slightly off-the-beaten-track getaway – or a combination of all three – here are eight of our top picks for where to eat, drink, play and stay on the Fleurieu Peninsula this summer.

Little Wolf Osteria
Pulling up at Mitolo Wines’ McLaren Vale cellar door – also home to the Italo-centric diner Little Wolf Osteria – you see a nondescript, matte-black shipping container. It’s sleek, but simple. Though what lies within is an experience that easily warrants the drive out of town.

What you’ll encounter first is an effortlessly elegant tasting room, where five-wine flights let you sample the family-run winery’s best drops, made using Italian varietals and techniques. (The crisp rosé, served ice-cold, is what you want on a sweltering day.) And this is the perfect primer for what’s to come.

Moving into the restaurant, which opens onto a lush vineyard, chef Vincenzo La Montagna takes “family-style” food and elevates it. You might get puffy, woodfired Roman pita with mortadella; blue swimmer crab spaghettini; or stone-baked spatchcock with ’nduja. Our recommendation? Splash out on La Montagna’s $110-a-head Abruzzo-style feast.

Kuti Shack
At this laid-back seafood shack next to the Goolwa Beach car park, you can see sand dunes and crashing waves from just about any seat in the house.

But don’t be fooled by the fuss-free fit-out – or any sandy-toed diners sitting nearby. This place has pedigree. It opened in 2019, spearheaded by a trio of South Aussie chefs who cut their teeth in some of the state’s best restaurants, including the nearby Salopian Inn, as well as Osteria Oggi and Press Food & Wine in the city.

The menu is casual yet considered, leaving room for the area’s famed Goolwa pipis to shine. (So, get ready to roll up your sleeves and slurp them from their shells.) They might come slathered in XO sauce, tossed in a linguini puttanesca with chorizo and capers, or even bobbing in a prawn laksa.

The word “kuti” means pipi or cockle in the local Ngarrindjeri language – and these molluscs have been harvested by the Ngarrindjeri people for more than 10,000 years.

Lino Ramble
One of the most exciting new cellar doors on the Fleurieu Peninsula is Lino Ramble’s, which it shares with Sherrah Wines and Bondar Wines. You’ll find it smack-bang in the middle of a few vineyards in a tiny cottage built in 1897.

Lino Ramble occupies what was once the front bedroom, so unsurprisingly it’s an intimate affair. Groups are limited to six people in line with current Covid-19 restrictions, but that almost adds to its charm. Expect a warm welcome and a guided tasting that covers all the current-release drops.

Owners Angela Townsend and Andy Coppard quietly set up shop in late 2020, finally opening a bricks-and-mortar home for their eccentric, retro-inspired wine label (which literally get its name from “linoleum”).

Their juicy, handmade vino uses fruit from single-vineyard sites throughout McLaren Vale and the Adelaide Hills, and there’s a focus on both sustainability and drinkability. One such example is the summery, smashable 2019 Pee Wee Novello nero d’avola.

Swell Brewing Co
There was a ton of anticipation in the lead-up to McLaren Vale brewery Swell unveiling its sprawling taphouse in early 2019, and it’s no wonder: owner Dan Wright and his wife Corrina Wright had been working away at the project for the better part of a decade.

The schmick, two-storey shed – located right near the eye-catching d’Arenberg Cube – has almost 1000 square metres of lawn out front so you can park yourself somewhere sunny and take in the idyllic vineyard views.

Inside, at the 16-tap bar, get a pint of Swell’s easy-drinking pale ale, the tropical West Coast IPA or the hazy (but well-balanced) apple cider, plus other small-batch creations. To eat, there’s a crowd-pleasing pub-like menu, with fried-chicken burgers, fish’n’chips and salt-and-pepper squid, as well as less-traditional options such as cheeseburger spring rolls.

Second Valley Beach
Arresting blue water, dramatic clifftops and balmy rock pools make this one of the Fleurieu’s – if not the state’s – most Instagrammed locations over the summer. (Be warned: it can get ridiculously busy on hot days.)

After you arrive at a compact car park leading to the Second Valley jetty, you’ll find a breathtaking beach on either side.

If you’re feeling adventurous, go left for around 800 metres. According to bathing bible Places We Swim, “This is the place that really cemented South Australia as the cliff-jumping capital of the country.” It’s also a great spot for snorkelling, scuba diving and jetty fishing – if you’re that way inclined.

A tip for hungry beachgoers: stop in at Yankalilla Bakery on the way to (or from) Second Valley for a topnotch beef pie or veggie pastie.

With dozens of hiking and camping options, this is one for the outdoorsy types. (And it’s also a pretty decent spot for whale-watching in the cooler months, as they migrate east.)

There are 15 walks and hikes for people of all abilities and attention spans. The 10.9-kilometre Deep Creek Circuit Hike is the most challenging (and most rewarding, as is usually the case), promising the absolute best beach and bushland views in the park. While on the 1.5-kilometre, family-friendly Stringybark Loop Walk, you’re bound to come across a western grey kangaroo or two, or even a short-beaked echidna.

Nest and Nature
This Airbnb, a couple’s retreat perched among Inman Valley’s rolling hills, is billed as a “glamping” experience. But, here, the line between tent and luxury eco villa is perennially blurred.

Stepping inside, you’ll find all the mod-cons: a cushy king-sized bed, a modern bathroom and a kitchenette decked out with a fridge and gas stove. There’s also an indoor fireplace worth throwing a few logs onto on those slightly chilly summer nights.

Arguably the best part, though, is that you can see stunning panoramic views of the surrounding valley – and Encounter Bay – from the deck and the bed, and while walking on the property.

Get that secluded, off-grid feeling without having to drive hours into the middle of nowhere. This spot is situated just 15 minutes’ drive from the coastal town of Victor Harbour.

Set on a sweeping, 200-acre property in the Hindmarsh Valley, it’s all about the region’s quintessential scrubland-meets-sea views. (There’s even a telescope you can use to survey your surrounds, right out to Granite Island, as well as the starry night sky.)

The house was recently renovated, so it has everything you’ll need for a lengthy summer stay that’s both homey and a little bit fancy. There’s a spacious kitchen, air con, a claw-foot bath, striking stone and timber features throughout, and a deck that wraps around the entire place – guaranteeing a 360-degree outlook.

Sound good? You could take this trip and more, thanks to Airbnb’s Once Upon a Summer competition. There are seven $15,000 Airbnb travel coupons up for grabs, for use anywhere in Australia. All you have to do is write an up to 50 word story on what memories you want to make this summer. The competition closes December 11. Enter now for your chance to win.

This article is produced by Broadsheet in partnership with Airbnb.