For your next road trip, skip the generic hotel and stay at a historic boozer. You might be surprised by what’s out there – from an art deco pub with its own cinema, to another once painted by artist Brett Whiteley. In partnership with Airbnb, we’re shining a light on some out-of-the-way gems. 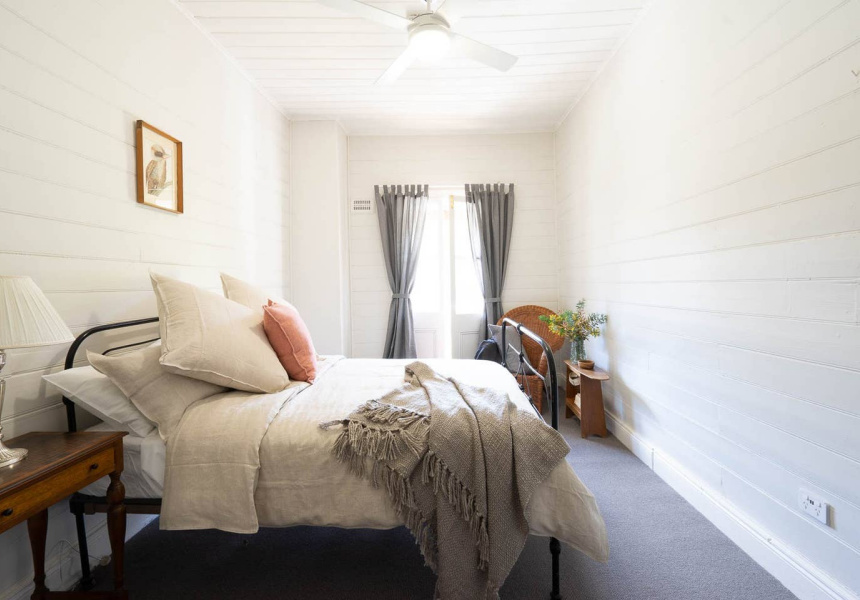 These days pubs are comfortable places for a drink and a feed, but for most of Australia’s colonial history, they’ve performed far more vital roles. The first public houses opened a mere eight years after the First Fleet landed, and continued to spring up wherever settlers and industry went – gold-mining areas in particular. In addition to acting as post offices and general stores, these early pubs were the only place for people travelling cross-country to stay overnight.

Though many pubs have retained the word “hotel” in their title, fewer and fewer are actually offering lodging nowadays. A bit of a shame, really. It’s a novel and intimate experience, staying at a pub. The staff call you by name, and you don’t have to summon a cab at the end of the night.

These country pubs are keeping the old traditions alive and deserve a spot on your next road trip itinerary. Some offer characteristically affordable accommodation and are holiday destinations in their own right, while others are just a good spot to watch the sunset and listen to live music.

Here are three great country pubs worth spending a night at.

The Royal Hotel, Sofala
This historic pub was established in 1862, just 11 years after the discovery of gold led to the founding of Sofala itself. The Royal’s current custodians, Sandie and Marty Tomkinson, have been running the place since 1955, after inheriting it from Sandie’s parents. They were there when Brett Whiteley painted the town in ’58, and again for Russell Drysdale’s 1974 Wynne Prize-winning canvas Sofala.

The Tomkinsons refurbished three of the hotel’s rooms earlier this year, using a $50,000 grant from Airbnb. These quarters are simple whitewashed affairs, with weatherboard-style wall cladding, steel-framed beds and shared bathrooms. The rooms open directly onto the pub’s well-preserved lacework balcony – an excellent place to enjoy a morning coffee from the Painted Horse Cafe, directly across the road.

A few doors down, browse the shelves at Slado’s Recycled Books, where you’ll find 10,000 titles (including rare and out-of-print volumes) covering just about every genre imaginable. When you’ve finished searching the shelves for treasure, try your luck in the river directly behind the shop. Even today, 150 years after gold was first discovered in the Turon, people can occasional still be seen panning its beds from time to time.

For lunch, up the road to Hill End, another gold-mining town Drysdale and Whiteley spent time in. On weekends Hill End Estate serves house-made pies and Devonshire tea on its sunny patio and deck, and there’s a friendly llama on-site. Several easy walking trails, ranging from 400 metres to four kilometres, also begin in the town.

Heading in the other direction, the Mudgee wine region is less than an hour’s drive north of Sofala, and the UNESCO-recognised Gulong Holtermann Museum, which houses a collection of 500 photographs taken in 1872, lies just north of Mudgee.

The Playhouse Hotel, Barraba
Andrew Sharp originally came to Barraba (population 1,410) to visit his partner’s family. Then something funny happened. He became involved in a campaign to save the town theatre. And when that failed, he ended up buying a run-down pub. In 2007, after installing a stage, screen and 80 seats in the pub’s old pool room, Sharp opened The Playhouse Hotel – a fitting move for the former stage actor, whose career took him to theatres in Sydney, Melbourne, London and New York. The pub now screens arthouse and world movies every Sunday afternoon. Cabaret, stand-up, stage shows and classical music performances are held more sporadically.

Barraba Bowlo and the town’s public pool are also walking distance from The Playhouse Hotel. The former offers lawn bowls and Chinese food, while the latter has a very decent waterslide. You know – to satisfy your inner child.

On the way into town, you’ll drive right past the silos painted by internationally-recognised artist Fintan Magee. His 40-metre-high mural, The Water Diviner, is a homage to the local farming community. Barraba is also the base for exploring Mount Kaputar National Park, home to the 83-metre-tall Horton Falls and Sawn Rocks, a 40-metre cliff made up of organ-pipe-like rocky structures.

Abermain Hotel, Hunter Valley
Pleasant little towns are scattered all around the Hunter, each with their own gaggle of upmarket hotels and B&Bs fed by the wine industry. But Abermain is one of the few places where you can still stay at a true-blue pub. To be more specific, a red-brick Edwardian pub established in 1905 and thoughtfully renovated since. In the upstairs rooms (double, triple, quad or family), chandelier-style light fixtures dangle from ornate ceilings, and the front bar’s pressed-tin ceiling is now complemented by polished floorboards and industrial-chic lighting.

The region’s standout wineries, such as Tyrrell’s, Hungerford Hill, Hope Estate and Domaine de Binet, are a 20-minute drive away. And on the off chance you want to do something other than drink wine while you’re here, there’s the 60-acre Hunter Valley Gardens; golf and spa treatments at Château Élan; the Hunter Valley Cheese Factory (which hosts workshops and cheese-tasting session); and multiple companies offering hot air balloon rides.

It’s all very civilised, which makes a frosty schooner and a golden-brown schnitty at the day’s end, back at the Abermain, feel all the more sweet.

Here's three country pubs worth dining at when travelling through. If you feel like settling in, we’ve included options for accommodation in the area.

Lawson Park Hotel, Mudgee
This one’s for you, steak fans. Lawson Park’s Red Heifer Bistro is renowned for combining the experience of going to the butcher with that of a steakhouse (a little like Macelleria in Bondi and Newtown). All the beef here is aged for 100 days, ranging from a 200-gram eye fillet to a 500-gram T-bone.

After you’ve chosen your cut from a refrigerated cabinet, you can opt to cook it yourself on a big indoor grill … or you can send it to the kitchen for an extra $4. Considering chef Stefano Burlando (ex-Icebergs) is running the show here, we’d advise you to stump up the extra cash. Burlando, who emigrated from Italy less than a decade ago, runs a broad menu that also includes house-made breads, pizza, pasta, parmies and burgers.

To complement the beef, the pub maintains a very decent wine list, with nearly everything selected from the Mudgee region. Choose a peppery shiraz or tannic cab sav and you’re all set.

Huskisson Hotel, Huskisson
Even for a seaside pub, The Husky is something special and consequently draws regulars from up to an hour away. On warm evenings locals coast down on their bikes and the merry-making spills out onto the adjacent lawn and beach-volleyball court. Between rounds, you’re welcome to re-enact that scene from Top Gun.

The original 1932 building is well preserved, but successive publicans have added a wide verandah and balcony facing the ocean to take advantage of the magnificent view over Jervis Bay. Friday to Sunday nights, the pub gets cranking with a DJ or live band.

The menu is surprisingly progressive, offering a vegan burger and veggie-packed nourish bowl alongside the expected parmie and fish’n’chips. Also on the menu: pizzas, local oysters from [Jim Wild’s] https://www.broadsheet.com.au/sydney/food-and-drink/aw-shucks) and charcuterie made on the South Coast.

Tumbulgum Tavern, Tumbulgum
Tumbulgum (say “tum-BUL-gum”, not “tumble-gum”) is a little town just south of the Queensland border. It’s barely wider than the Tweed, the river it’s sited on. Though less than 400 people call the place home, it has not one but three cafes – and this classic timber and corrugated-iron-roof boozer dating back to 1887.

Unlike so many other pubs these days, the interior of “the Tumby” still matches the exterior. It’s a mix of raw brick, rough-hewn timber arches and cladding, plus an accumulation of memorabilia such as an old draught-horse collar and black-and-white photography of early loggers in the area.

On weekends, the pub’s big, west-facing decks and patios reliably heave with locals getting stuck into seafood platters, burgers and the occasional curry. The place really comes into its own around sunset, as the sun slinks behind the hills across the Tweed, giving everything a golden glow. This is a well-known photo opportunity among tourists, so arrive well before sundown if you’re keen to grab a table.

This article was produced by Broadsheet in partnership with Airbnb. A Road-Trip Guide to Bathurst 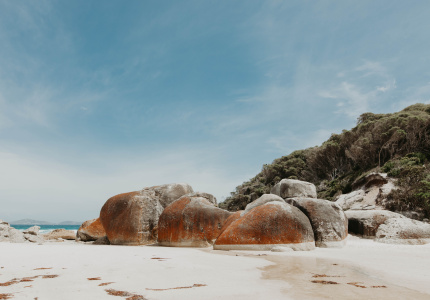 A Road-Trip Guide to Wilsons Promontory 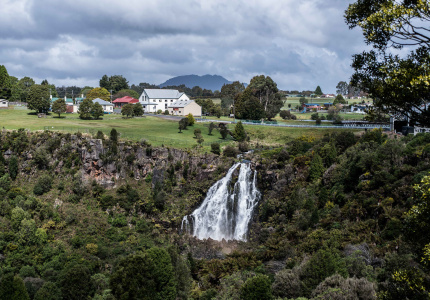 Six Classic Pubs to Visit (and Stay at) in Country Victoria

A Road-Trip Guide to Bathurst

A Road-Trip Guide to Wilsons Promontory

Six Classic Pubs to Visit (and Stay at) in Country Victoria