A Rooftop Bar, Stress-Busting Beds and a Focus on Sustainability: Little National Hotel Has Opened Right Above Sydney’s Wynyard Station

The hotel rooms are pretty much all bed – but an enormous communal work and relaxation space means you have plenty of room to spread out. 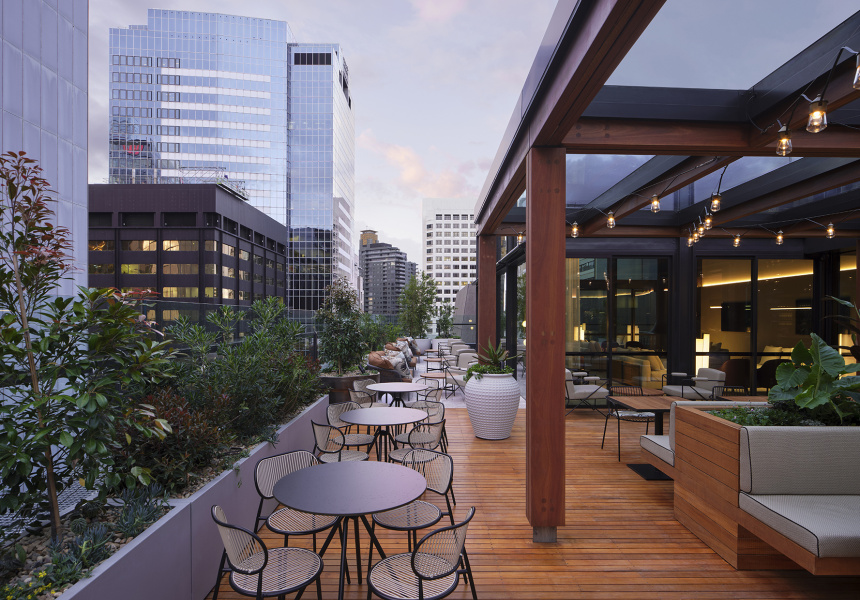 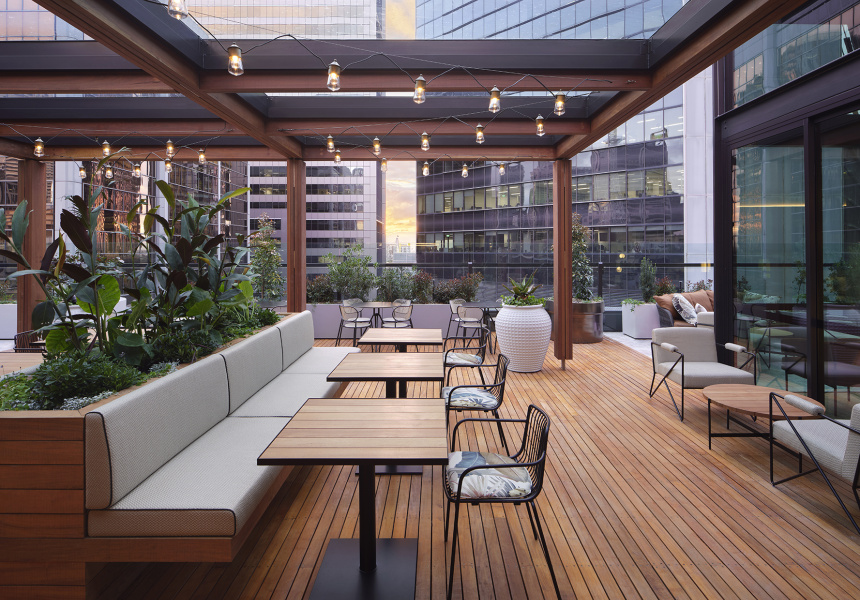 It seems small is the new black in the hotel world, with a string of micro-hotels springing up around the globe. At Little National, terrifically located just above Sydney’s Wynyard Station, the ingeniously designed 17-square-metre rooms do away with all the things you don’t need from a hotel (large wardrobes? Who unpacks?) to make room for the things you do. Such as massive, extremely comfortable beds. But more on those later.

It’s the second hotel of its kind for the Doma Group (Little National Canberra opened in 2015; a third is slated to open in Newcastle in 2022). Just like its counterpart in the nation’s capital, the hotel has been designed to suit the needs of solo business travellers or people who are in town to explore the city: guests who needs to sleep well, eat well and have space to work.

Each of the 230 guest rooms is pretty much all bed. And what beds they are. If the brief was to create a bed that holds you and says, “everything is going to be ok”, AH Beard – who designed the mattresses specially for the Doma Group – succeeded. Branded “Arms of Morpheus” (after the Greek god of dreams), the beds have been such a hit at Little National Canberra that the hotel group sells at least one a week.

The super-king-sized beds are built into fully contained wooden nooks and come complete with enormous built-in smart TVs, with complimentary on-demand movies (a big thank you to whoever thought to include Blazing Saddles), and play-your-own smart device functionality. The bed occupies the entire wall-to-wall length of approximately one half of the room and has a floor-to-ceiling window at one side. The blinds are activated by bedside switches (which also have charging ports and lighting controls): one lets the light filter through and the other blocks it out completely. Japanese influences – the wooden frame, a bamboo garden peeking through the wall-sized window, a cast-iron tea set by the bed – evoke calm.

While the rooms are small, the saved space can be found on the sprawling 11th-floor rooftop. Architecture firm Bates Smart (Newmarket Randwick) has created a space that’s at once inviting and sophisticated, communal and private. The Lounge is organised around a central firepit, adjacent to the Terrace Bar. Meanwhile, a plant-festooned outdoor area has neighbouring office workers gawking from their high rises and enquiring about office Christmas parties. Those looking for quiet can find sanctuary in the library, with unlimited wi-fi, USB and power ports, a wireless colour printer, and endless cups of coffee and tea.

The hotel encourages guests to explore the city and supplies a comprehensive list of nearby restaurants and bars. Back at the hotel the focus is on wellness and sustainability – there’s a well-equipped gym with its own app to guide visitors through a workout. The hotel supplies palm-leaf cutlery and plates when you order from Uber Eats; the slippers are biodegradable; Nespresso pods are recycled; and the bathrooms are stocked with bamboo toilet paper from Who Gives a Crap and refillable products by Appelles. Plus the option of kiosks for checking in and out not only saves paper (and time), it’s also Covid-safe.

“We want people to get out and experience the city rather than spending all their money at the hotel,” says Little National’s general manager, Sandra Bellamy. “We call it ‘affordable luxury’.”

Little National is at 26 Clarence Street. Rooms start at $179 per night.