Follow one of the world’s greatest wine trails while eating (and sleeping) like royalty. In partnership with Tourism New Zealand, here’s where to wonder while you wander. What’s the connection between Wellington and Hawke’s Bay on New Zealand’s North Island? The classic Kiwi wine trail. We recommend you start in Wellington and meander north, beginning with chardonnay, working your way through pinot and ending with a Bordeaux-style syrah. By following this well-worn route, you’ll not only discover vast stocks of high-quality wine, you’ll also drive through some of the most stunning country on earth.

Here are a few of the places we stop at when we’re at leisure in the North Island.

1154
The first thing you’ll want to do when the plane hits the tarmac at Wellington International Airport is push your way through baggage claim, steal a cab, squeal down Cuba Street and claim a table at 1154. There’s nothing fancy about this pasta joint, I suppose, except for the fact that they make all their own noodles using free-range eggs and Kiwi semolina, and serve it alongside funky local organic wine. If you’re not Italian or a total nerd, the menu has helpful descriptions of pasta morphology: a bucatini fra is a “long hollow pasta”, and curvi rigate is of course a “curvy tube”. Your pro tip is to eat the torta cioccolato, which is apparently near identical to the infamous Chocolate Nemesis cake at London’s Italian-inspired River Cafe restaurant.

If your eyes are bigger than your stomach, 1154 also sells bags of dried pasta and jars of dark passata. Pack a spare suitcase? 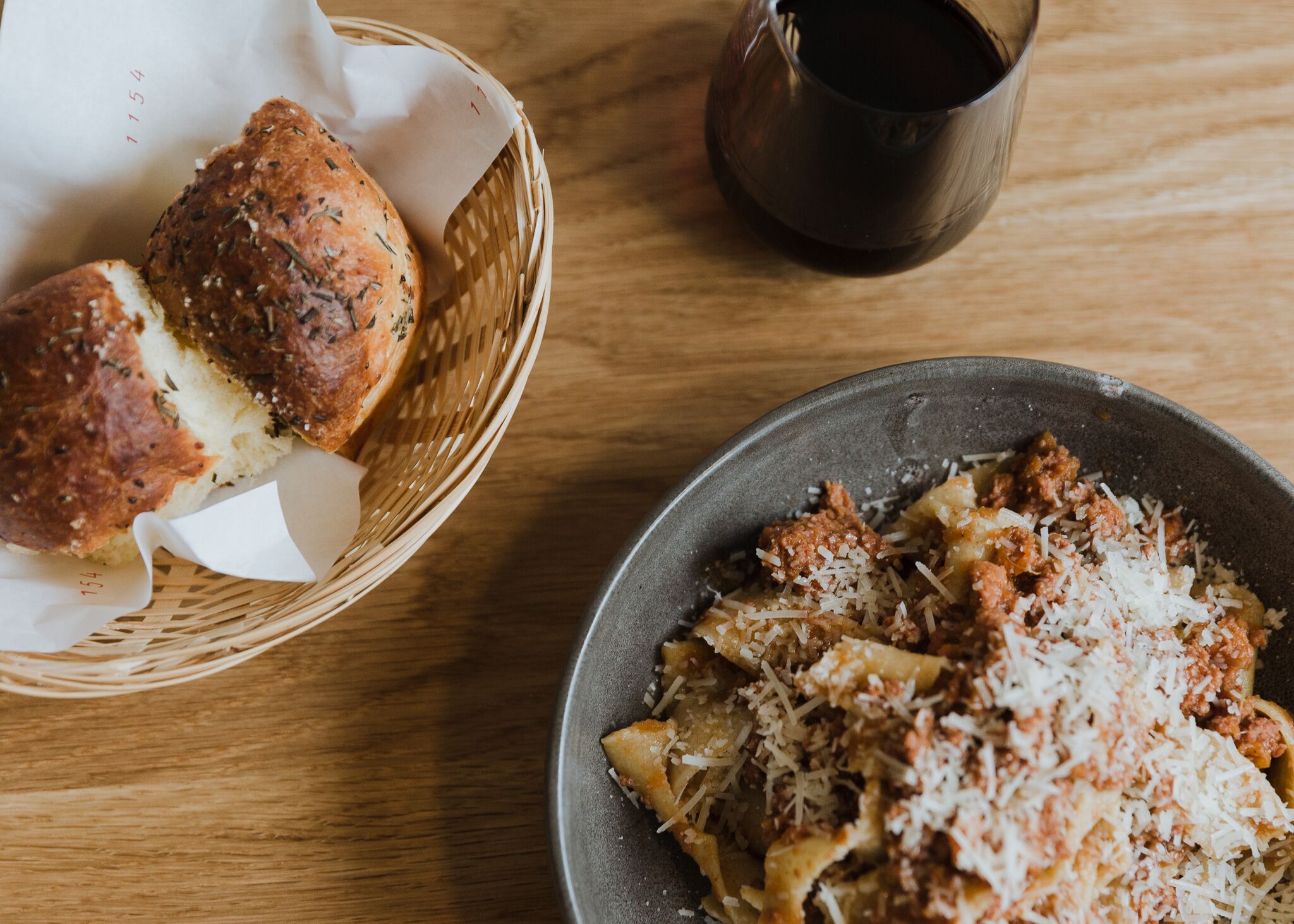 Food Forest Organics
With long days ahead of you, head for Food Forest Organics in Greytown. About an hour-and-a-quarter out of Wellington, this cute little joint sells what it says on the sign: small-batch honey, olive oil, hemp seed oil, walnuts, gluten-free flours, cereals, cheese, yoghurt, tea and fresh daily produce. While you can buy these ingredients in their unprocessed form here, you can also have someone professional cook it for you – a salad made with fresh produce and served with sourdough bread, say; a cashew nut cheesecake; or a green smoothie that promises to be “full of goodness”.

While you repose with your virtuous breakfast, ponder the fact the food you’re eating is grown at the nearby Cameron Family Farms, a vegan establishment that produces linseed and industrial hemp as its main earners, alongside walnuts, flaxseed, lavender and small-batch honey. Plus it has modest 40-hectare kitchen garden which services the store. Aside from growing hippy vegetables, you might also know the resident farmer, James Cameron, for his direction on a couple of little-seen films such as Avatar, Titanic, Aliens, and of course the seminal Piranha II: The Spawning. That’s right, the big-shot director splits his time between homes in the US and New Zealand. 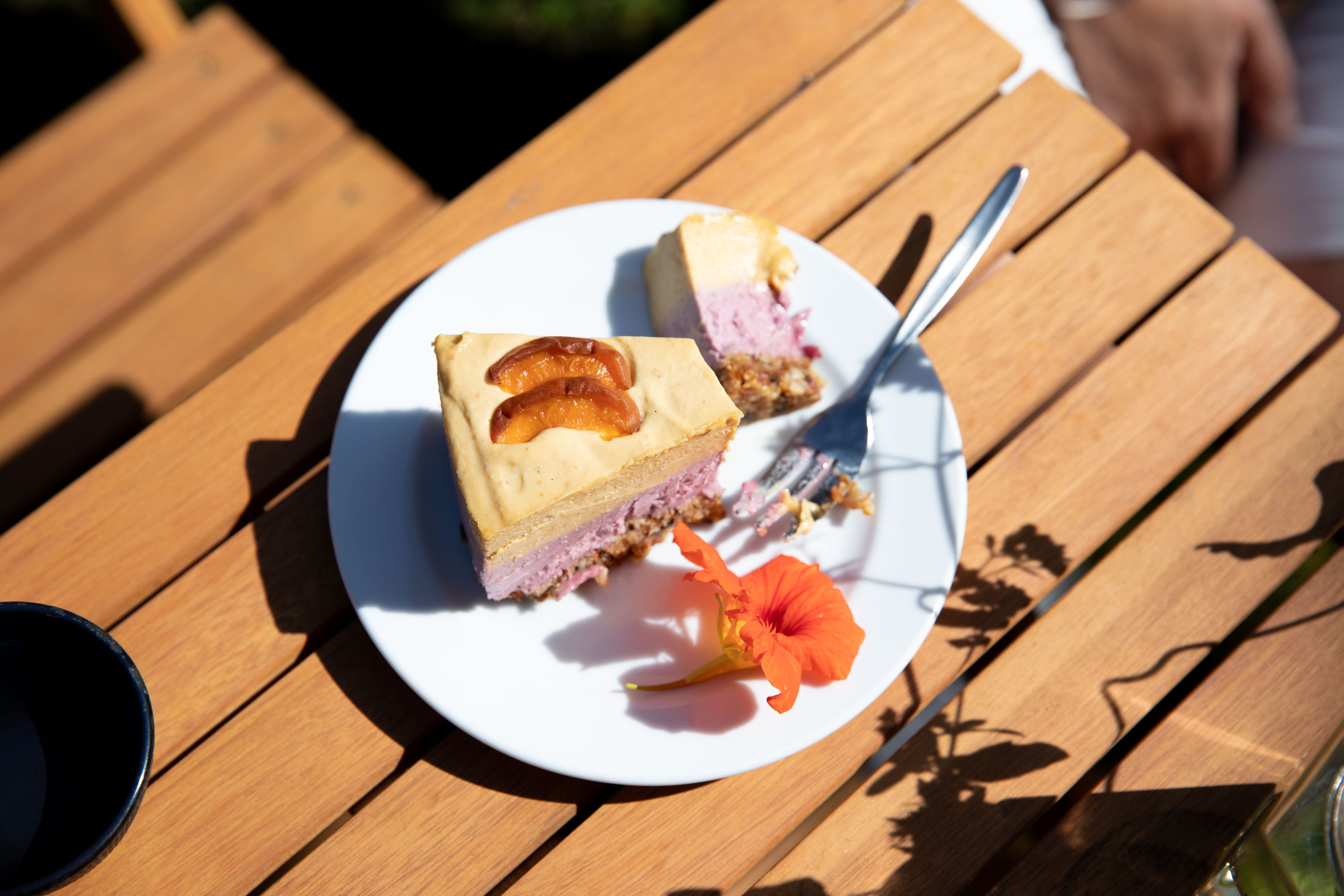 Black Barn Bistro
Once you make it past Martinborough, it’s time to drive north toward the Black Barn Bistro. The bar for “great views” is set rather high, and damn it’s an excellent location. The farmhouse is set in a vineyard surrounded by a small pine forest, above which teeters a straw-coloured range of curvaceous hills. Beautiful.

Like all the best restaurants in Aotearoa, Black Barn Bistro deals directly with farmers to populate its menu (and also hosts a weekly farmers’ market through summer). What results is an outstanding selection of simple dishes: croquettes filled with goat’s meat cooked in a hangi (a Maori pit oven with hot stones); sourdough baked with an 80-year old mother yeast; octopus straight from the Cook Strait; and handline-caught white fish served with fennel and cucumber. Chef Daniel Pistone might be doing the impossible and raising the quality of this already pristine location. 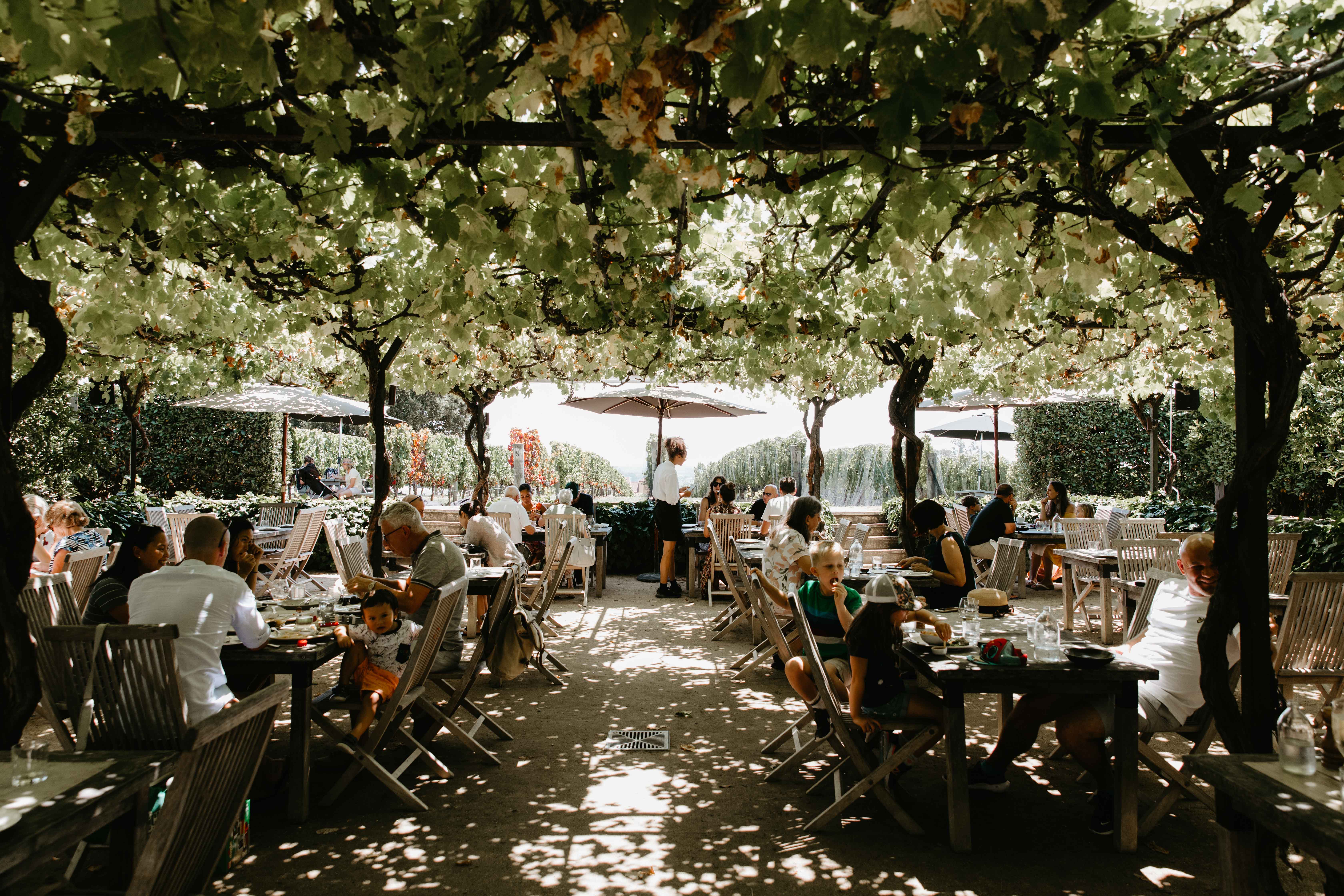 Weta Workshop
While there’s plenty of “art” in Wellington, there are no artists more prolific, admired or downright profitable than those at Weta Workshop, Peter Jackson’s special effects studio on the Miramar Peninsula. You’ll come here for the Hobbits – and you’ll get Hobbitses – but you’ll soon realise Weta’s behind all your favourite talkies, such as Avatar, The Matrix and the 21st century’s finest film, Blade Runner 2049. One of Weta’s actual technicians will act as local tracker, guiding you through the miniatures stage, the props, tools and costumes in the workshops, and the Weta Cave shop, where you can purchase (or just ogle) studio collectibles – like the One Ring in 10K solid gold for the bargain-basement price of $2214.50. Meanwhile, professional nerds can participate in hands-on workshops with the Weta crew and learn how to fabricate leather and chain mail or sculpt giant monkeys. The rest of us can get a selfie with Gollum. 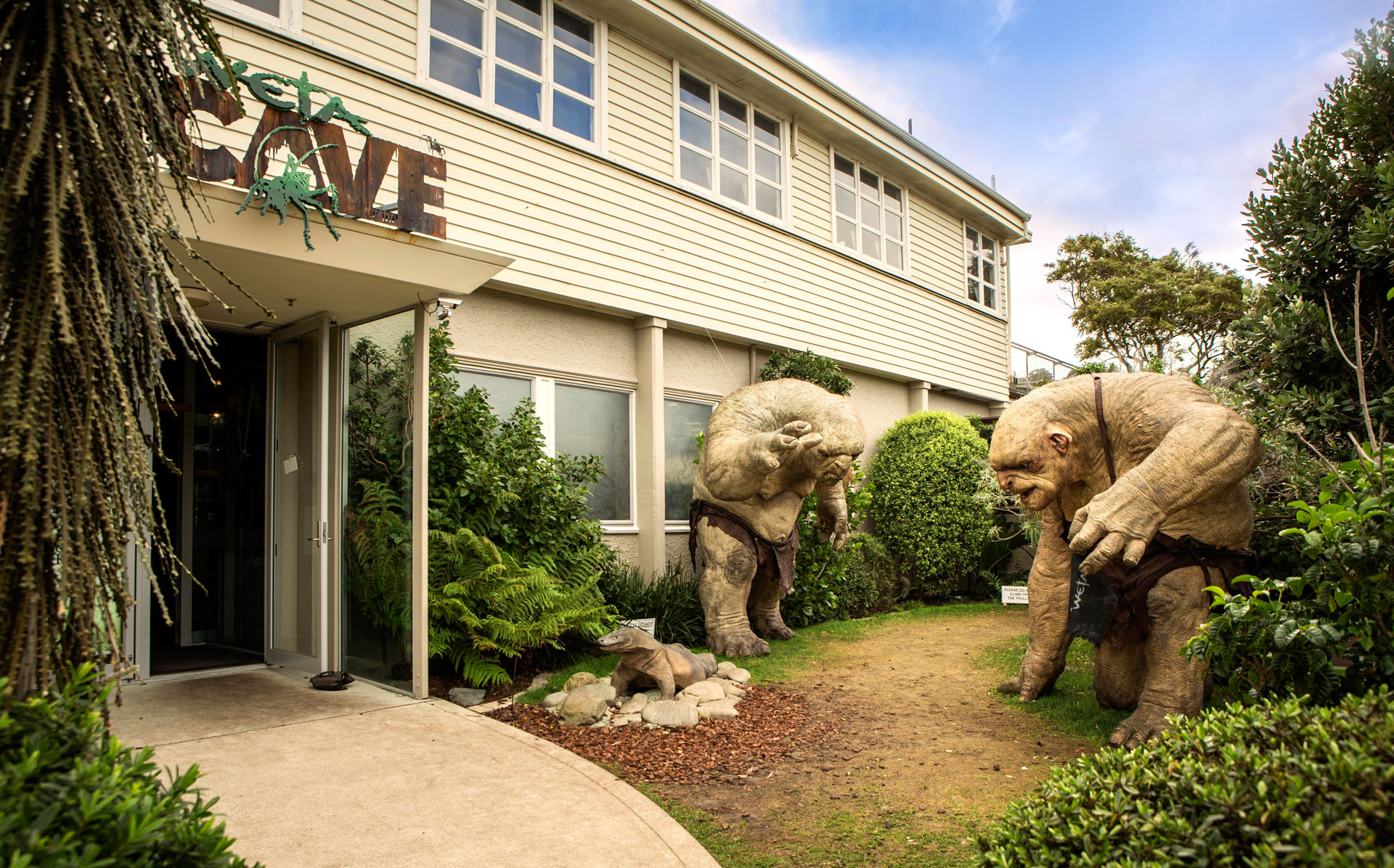 Napier
The city of Napier on the island’s east coast is a salient reminder beautiful things can come from disaster. In 1931, Hawke’s Bay was hit by a catastrophic earthquake that shook for three whole minutes and levelled the town entirely. One unforeseen consequence of the tragedy was the whole town was immediately rebuilt in the styles of the ’30s: stripped classical, Spanish mission and, most prominently, art deco. This means gorgeous architecture is literally everywhere. When travel guides advise you to “just wander around”, it’s usually a sign of laziness. But in this case it’s actually a good tip.

Cruise along the shorefront and stare longingly at all of the buildings (note the salmon-pink 1935 bandstand, the Soundshell). If you’d like a more structured experience, take a guided walk with a local expert, or jump in a vintage car for a whirlwind tour. Tours are run by the Art Deco Trust, leaving from nearby Tennyson Street.

Check out the National Aquarium’s oceanarium tunnel, as well as native creatures including kiwi birds, penguins and tuatara. A short drive away, Ōtātara Pā Historic Reserve includes one of the country’s largest pā complexes – that is, an ancient Maori hillfort settlement. If you’re planning on hanging around, Napier is also home to two of NZ’s greatest restaurants, the totally slick Bistronomy and the more stately Pacifica, where this writer tasted his first mutton bird – a meal you’re sure to remember. 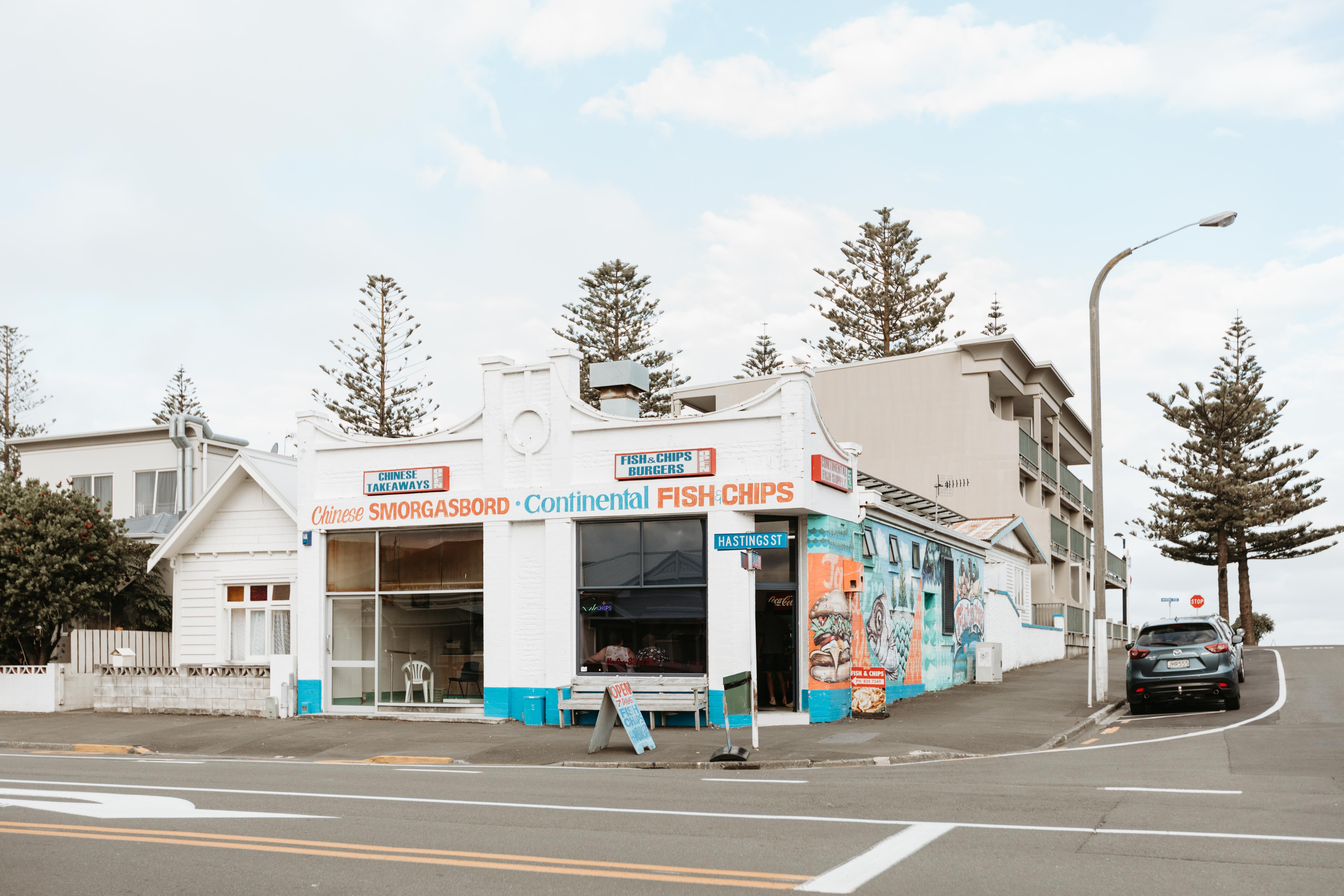 Kaweka Forest Park
The final stop on your east coast exploration itinerary is Kaweka Forest. West of Hawke’s Bay, tending inward and upward towards Taupo, this landscape changes rapidly from alpine shrublands to tussock valleys and beech forests. Because of its inherent beauty, this is exactly the place to try your hand (or foot) at “tramping”, the word Kiwis use for bushwalking. Other more cortisol-inducing activities include rafting, canoeing, hunting and fishing – though people in search of cruisier vibes can laze in a natural hot spring. In any case, there are many lovely things to do here in Kaweka, not to mention further north in Kaimanawa, Tauranga, Lake Tarewera, or even Rotorua and Hamilton, if you’ve got another few weeks up your sleeve. 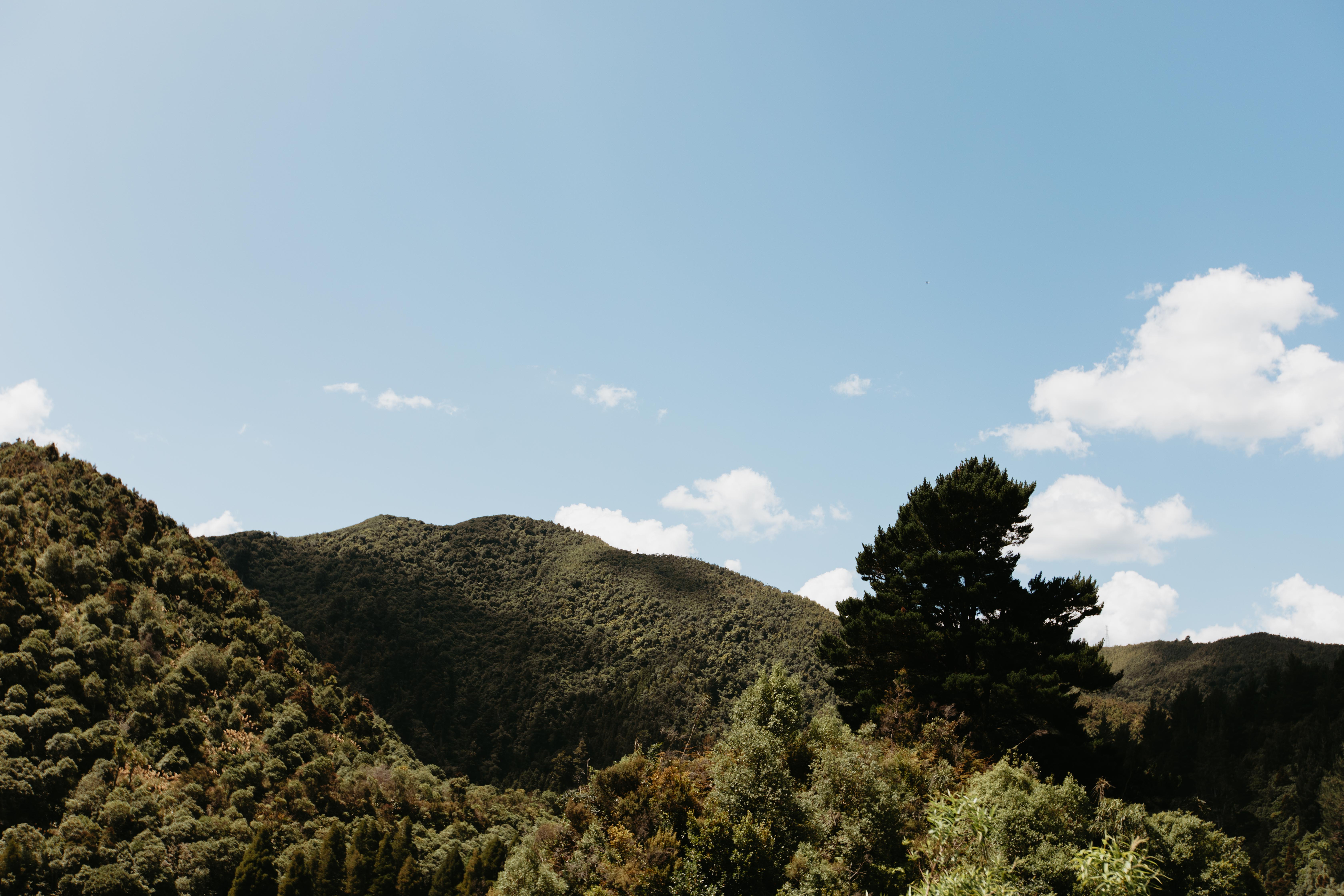 Cambridge Road (and Beyond)
You’ve explored Wellington, you’ve seen some art, and you’ve eaten well. Now, it’s time for wine. We suggest you begin in Martinborough at Cambridge Road, one of the more eccentric vineyards on the local wine trail.

Here vigneron Lance Redgwell farms his relatively small 5.5 acres biodynamically, relying mainly on the rich alluvial soils deposited during ancient volcanic activity. It’s back in the shed where Redgwell gets creative. In 2012 he perfected a vintage with zero additives – bloody hard to do –then moved on to even wackier “natural” techniques.

Alongside your standard wild ferments, skin contact and full malolactic processes, Cambridge Road is notable for its unusual vats, including ceramic vessels and a giant barrel made from totara wood sourced almost a century ago. There’s total transparency in the winemaking process – if a weta burped in the vineyard last April, it’ll be mentioned on the side of the bottle. These details are only important in that they contribute to delicious chardonnay, pinot, marsanne, muscat, viognier and pinot gris. And, they’re by no means the only way to make wine – as is evidenced by the rest of Martinborough, which you should definitely explore. Don’t miss Palliser, for instance, and then follow your heart through the Wairarapa. 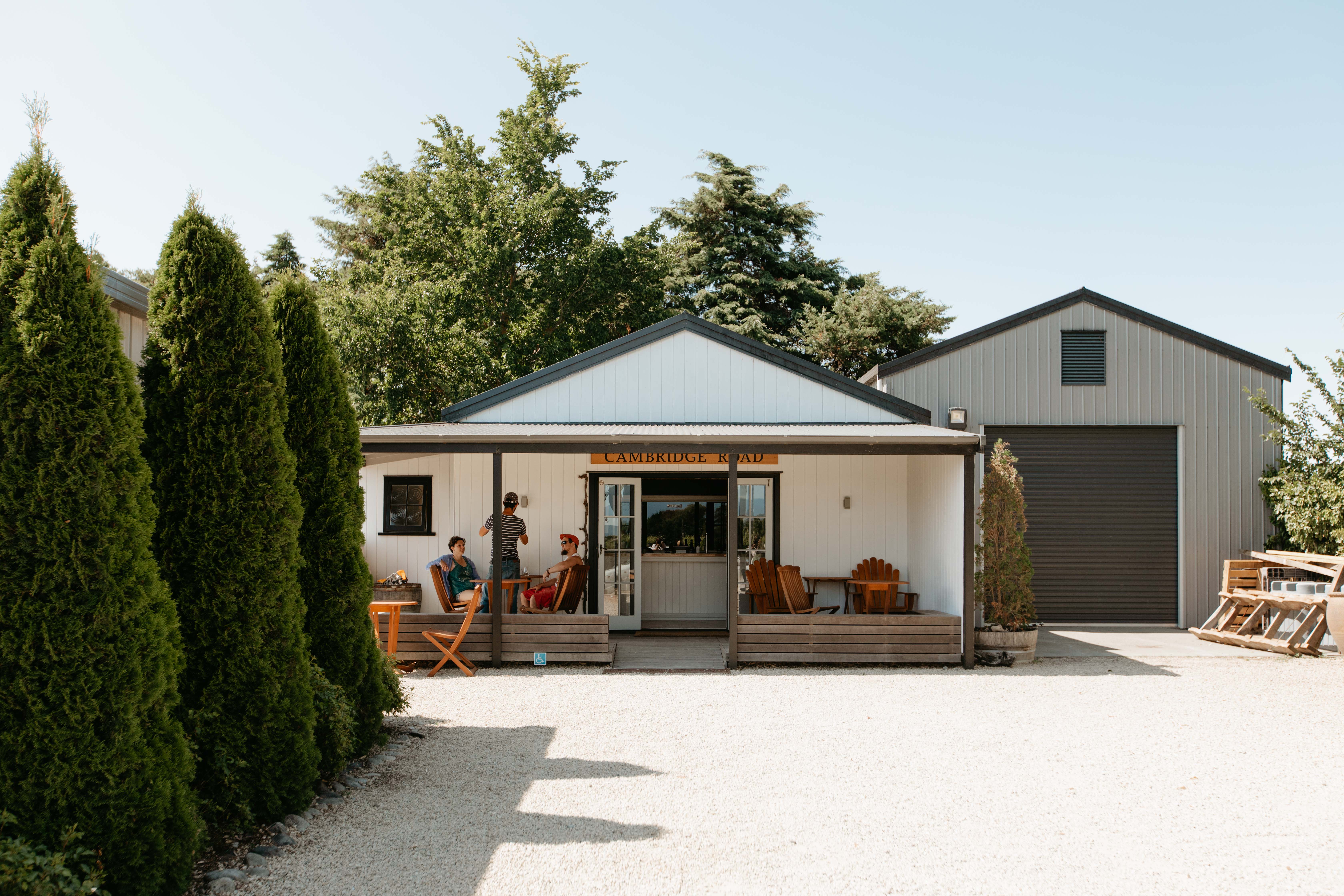 Gimblett Gravels (and surrounds)
The Gimblett Gravels wine-growing district boasts 28 wineries clustered just 20 minutes south of Napier. This low, flat landscape, with its little mountain humps and long rows of vineyards, produces a great number of wines – dozens of which are wreathed in glory and golden medals, such as Squawking Magpie and Pask.

The reason it’s such a killer spot for making booze is the fact it’s an old riverbed – the “gravels” aren’t gravels so much as washed river stones. Red-coloured grapes like it up here, especially pinot, cab sav and syrah (similar to bordeaux). One of the sweetest spots is Craggy Range, where syrah grows on vines cloned from one first brought to NZ in the 1840s. This is a serious, internationally recognised winery, named New World Winery of the Year by Wine Enthusiast in 2014. Its owner, Terry Peabody, even established a 1000-year trust to ensure the land can (almost) never be sold. 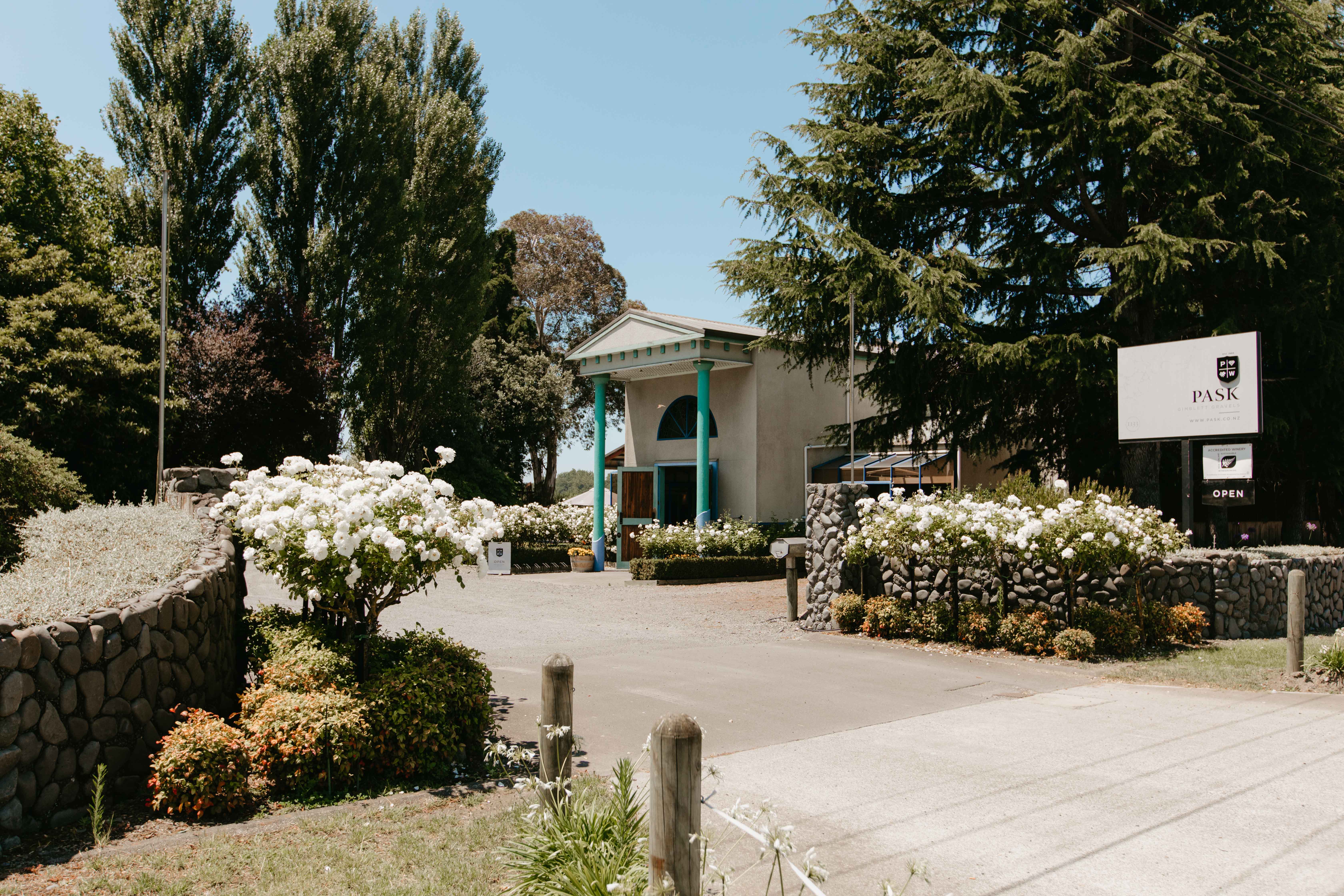 QT Wellington
It feels a sure thing the folks behind QT would be okay with the assessment that their brand represents the weirder end of the boutique hotel range. QT Wellington is no exception, distinguishing itself from the outset with a huge copper hippo on the roof.

This hotel is a real-deal gallery with hundreds of works in its collection, including a cow made from canned beef, an oil painting of what appears to be Lorde and a couple of Italian superbikes parked in the lobby. Rooms are equally kooky, with golden wallpaper featuring patterns in chocolate velvet, and lots of leather, decals and enameled steel. But the view is conventionally fantastic, looking out over the harbour and the urban hillsides of Welly. While there’s more than enough awesome food outside, QT has its own banging venues, including Hot Sauce, which does Asian flavours and cocktails, extravagant French restaurant Hippopotamus. There’s also high tea, for those of you with a thing for macarons. 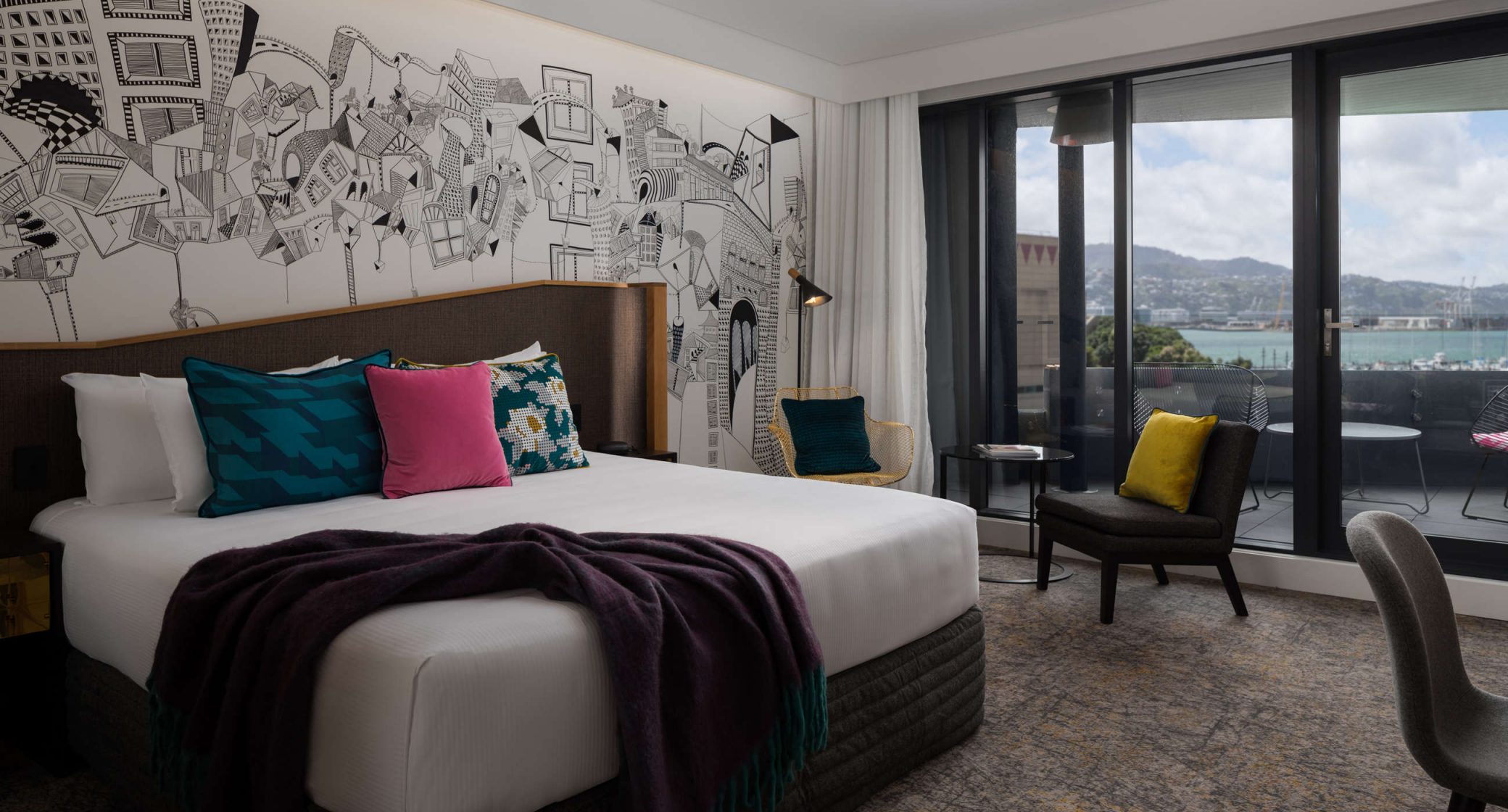 The Farm at Cape Kidnappers
For anyone fortunate (or rich) enough to have stayed in a Relais & Châteaux property, you’ll know in advance that everything at The Farm will be perfect. For those who haven’t had the pleasure, behold: luxury.

The Farm differs from some of the group’s other hotels in that it’s actually on a 6000-acre sheep and cattle station. It’s also done in the regional style – a white-painted farmhouse vibe, with hessian and iron, all fabricated with the greatest attention to detail. During your stay, most of your food will be harvested on the property. Apart from eating and dozing in an armchair, The Farm also offers a selection of more active pursuits: orienteering, clay-bird shooting, scenic flights to the central plateau and cruising about in a Can-Am (a kind of dune buggy for grass and mud). Being a farm, there’s also horse riding, which, if you can ride, is dreamy. The only problem with The Farm – and indeed, every traveller’s destination in New Zealand – is eventually you have to leave. Rude. 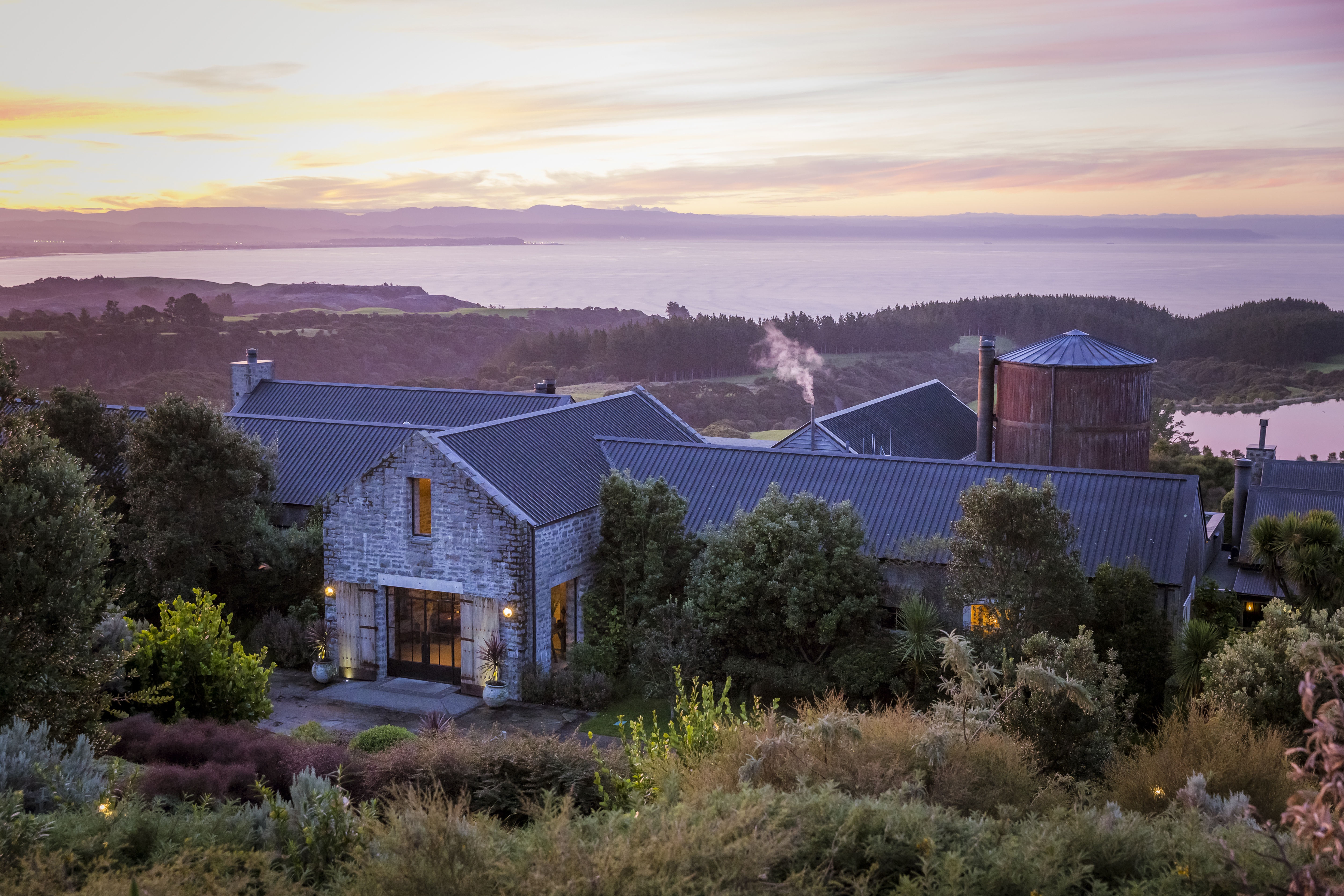