One of Australia’s most famous drives is all about salt-kissed towns, dramatic scenery and luxurious accommodation. Also, food and drink – lots of food and drink. In partnership with Tourism Australia, we take a trip west from Melbourne and see where the road takes us. 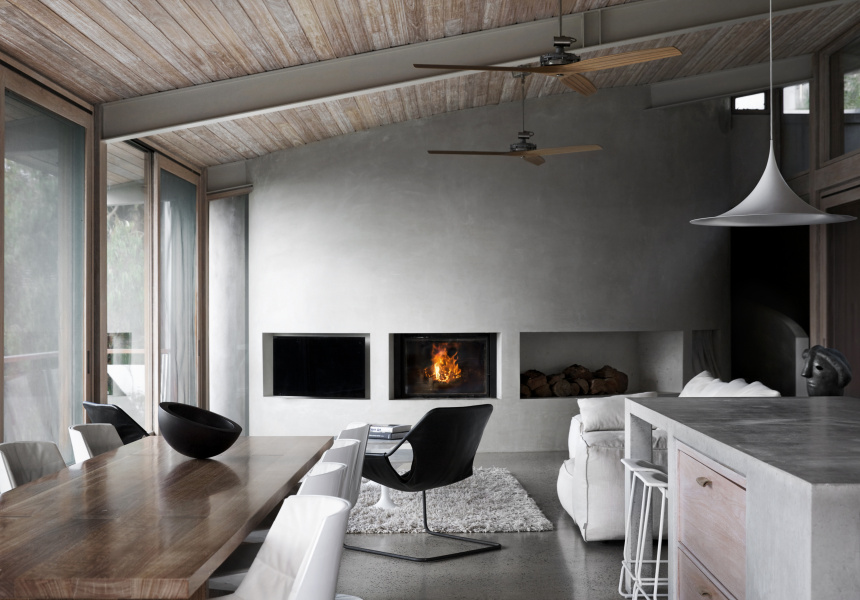 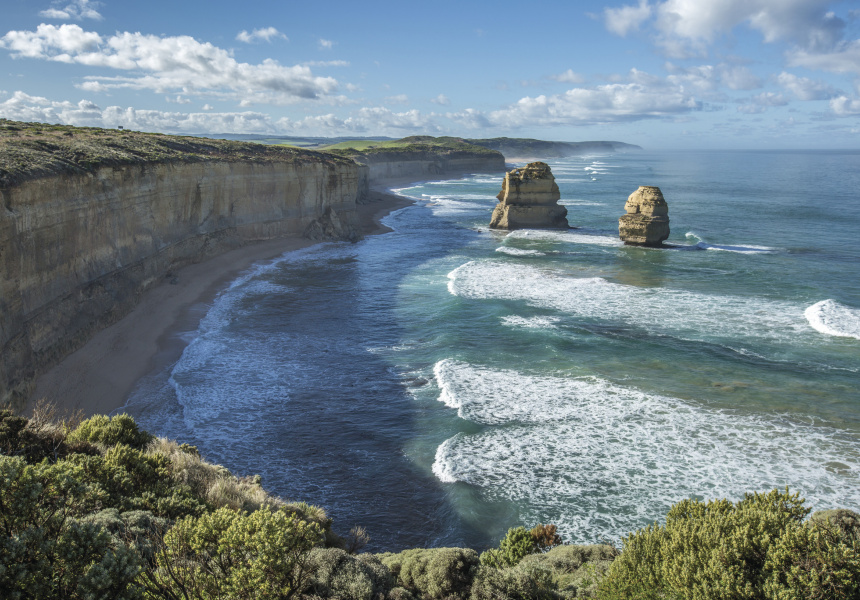 Stay up to date with the latest Covid-19 news on closures and restrictions around the nation. Here’s where we’re bookmarking for our next holiday.

But the Great Ocean Road isn’t so much a road as a region – one that stretches inland to encompass soaring redwood forests, lush national parks, and ancient volcanic lakes and mountains.

What’s more, Melbourne’s celebrated love of food and drink extends down this way too – the latter available only if you’re staying overnight, of course – with exceptional restaurants, bars and brewpubs supplied by world-class producers of meat, cheese, wine and beer. And there’s a stack of accommodation options, from charming boutique hotels to architecturally designed holiday homes.

Here’s a guide to the region – what to eat, drink and do, and where to stay.

Brae
Brae by now barely needs any introduction. Consistently recognised as among the 50 best restaurants in the world, a meal at chef Dan Hunter’s country-house fine diner is less a degustation and more a long, leisurely festive lunch or dinner, with much of what’s on the plate supplied by the huge kitchen garden outside.

Locally sourced and native produce is king here – you might try southern rock lobster with warrigal greens and shellfish porridge, or pork jowl barbequed with smoked eel –the food washed down with wines sourced from across the world (and across the decades) and a cellar full of exceptional whiskies and sakes, some of which are 20 years old. The restaurant now even serves its own beer made in collaboration with local brewery Prickly Moses and using Brae Farm’s own organically grown wheat.

If nothing else, dining in Brae’s beguiling dining room as a Victorian sunset streams through the window is simply a nice way to spend a few hours of your holiday. Sure, you’ll pay for it (it’s $300 per head or $480 with matched wines), and you’ll need to book well in advance, but this is about as essential as Australian dining gets.

Pizza Pizza
In an old weatherboard shopfront in Lorne you’ll find some of the best pizza on the coast.

Brett Graham and Robert Lowther opened the poky Pizza Pizza on Christmas Day in 2006. It proved an immediate hit with locals and big smoke interlopers, leading the young restaurateurs to later open the similarly popular Bottle of Milk (add this to your brunch to-do list).

Pizza Pizza is holiday fast food, elevated. The dough might be hand-stretched and topped with first-class produce, but the actual menu is unfussily democratic, covering everything from salami and vegetable calzones to fancy takes on both Hawaiian and meatlovers pizzas.

The Wye General Store
This local general store – the place to pick up muesli, surfboard wax or even send a letter or two – doubles as one of the best brunch spots in the region.

Set inside an immaculately converted former house that boasts spectacular views towards the sea, the Wye General cafe is the place to hit after a dawn surf, enjoying the breeze on the deck in the summer or gathering inside around the combustion heater during cooler months.

On the all-day menu you might find dark rye with beetroot relish, sheep’s feta and a soft-boiled egg; a black rice salad with crispy tofu, broccolini, spinach and soy and ginger dressing; or a haloumi burger with rocket, grilled eggplant, almonds, mint and beetroot relish. There’s also a short selection of sourdough toasties.

Growlers
Any self-respecting drive down the Great Ocean Road wouldn’t be the same without at least one beer at Growlers, a beautiful tin-roofed timber pub on The Esplanade in Torquay.

Growlers has both a restaurant and a cafe, but the reason you’re really here is the picket-fenced beer garden out front, which has beautiful views out towards Bass Strait. At holiday time, the lines of picnic tables fill with bathers-clad groups sharing jugs of beer and snacking on plates of seasonal oysters, cajun wings and salt-and-pepper squid, the scene completed by the long dusks and live music.

Brother and sister brewers Matt and Sharon Bradshaw make four regular beers – a pale ale, a stout, an Irish red and a Silvertop (kolsch) – in the 600-litre brewhouse, which are available all year round. They also produce a bunch of single-batch beers and regular, stronger flavoured seasonals, including a popular Untamed Turkey double IPA.

By all means stop by for one, but it’s best to make a session of it on the deck during summer, watching the mountain bikers disappear into the bush, or inside the cabin-like dining room during the winter months, sitting at communal tables and admiring the natty old bicycles that hang from the ceiling.

There’s also a menu of classy pub grub if you need an excuse for one more paddle.

The Dart & Marlin
Occupying an old paint shop in a historic quarter of the Warrnambool CBD, this charming bolthole is part of a neat two-hander, with Standard Dave Pizza next door. It means you can go large on stone-baked slices while you peruse a long list of beers, classic cocktails, spritzes and Victorian wines.

Where to sit? There are the cute church-pew booths that line one side of the venue, but if there’s space, head out back to the courtyard with its festoon lights, vine-covered wall and (when it’s chilly) roaring fireplace. It’s a good spot to keep it intimate on a quiet night or mix with the locals when things get lively.

In 1936 a group of Victorian foresters planted an experimental grove of Sequoia sempervirens in the Otways – 80 years later, it’s resulted in a park of enormous trees, with some now standing 60-metres tall. Walking in this forest can be an eerie, contemplative experience, the thick tree trunks and surrounding carpet of ochre-coloured pine needles absorbing sound and lending the light a gentle glow.

After exploring Redwood Forest, drive north to the very top of the range to Otway Fly Treetop Adventures. Here, you’ll find more than 600 metres of walkways zigzagging across the thick rainforest, elevated 25 metres above the ground. There’s also a 45-metre-tall lookout and, for the truly adventurous, a zip-line that will have you shooting from tree to tree.

If you’re driving in from the east, be sure to access both the redwoods and the treetop walk via Turtons Track, a brilliant winding road that twists and turns as it climbs through some of the Otways’ most spectacular scenery.

Learn to Surf at Go Ride a Wave Anglesea
Go Ride a Wave now has a bunch of surfing schools in Queensland and Victoria, but this Anglesea outpost, first established in 1987, is the original.

Go Ride a Wave caters for all skill levels but specialises in helping beginners get to grips with the Australian surf. The wide, gentle sloping beach at Anglesea is the perfect location to learn, with the GRAW instructors keeping beginners waist deep in the water, helping them build confidence. Lessons are run daily, with group and private lessons available on request.

Make some time to hang out in Anglesea afterwards, bookending your lesson with coffee at 4 Kings or fish and chips at Fish by Moonlite.

Visit the 12 Apostles and Volcanic Lakes and Plains
The Instagrammable climax of any drive along the Great Ocean Road, the 12 Apostles are a series of 45-metre-tall limestone pillars that shoot up out of the Southern Ocean, the result of coastal-cliff erosion across millions of years.

To make the most of your visit, head to the eastern viewing platform at dusk or dawn, when the formations and surrounding cliff faces glow in the soft light (there are helicopter tours, too, if you want to get a bird’s-eye perspective). Also, try to make time to climb down the Gibson Steps to the beach east of the Apostles and get up close and personal with Gog and Magog, two further offshore stacks.

Still, the 12 Apostles are simply an introduction to a wider mini-region with a rich geological history. It pays to head inland to explore a series of volcanic peaks and crater lakes, along with a bunch of charming historic towns. You can hike to the top of Mount Elephant or Mount Noorat, the latter often regarded as one of Australia’s best preserved dry craters, or fish in the calm waters of Lake Tooliorook, with views across to Mount Elephant.

There’s also a pair of rail trails which you can cycle to explore the region, and for the more food-focused, the 12 Apostles Gourmet Trail will have you passing through quaint townships such as Port Campbell and Timboon to visit a stack of regional producers.

Long Tide Retreat
Tucked away high in the hills overlooking the sea is this rustic two-storey cabin constructed from recycled local timber.

Originally built in 1992, Long Tide’s unassuming facade belies a cosy interior with a lovely lived-in feel (despite only opening for bookings in late 2019), with a bunch of nooks and crannies perfect for reading and relaxing.

There’s a fireplace (of course), a claw-foot tub and a cupboard full of board games and puzzles, but the killer feature is the deck out front with its views across the tree line towards the sea – book the house with some mates and this is where you’ll spend most of your time. Outside, there’s a barbeque and seating where you can spot local wildlife during the day and the stars at night.

The house sleeps four people in two bedrooms, one of which is in a nifty attic. The owners, who live next door, stock the kitchen with the basics and occasionally eggs from their own chickens.

Ocean House Lorne
There are holiday houses, and then there’s this stunning two-storey concrete, timber and glass edifice on the edge of the Otways in North Lorne.

Designed by celebrated Melbourne architect Rob Mills, Ocean House feels less a house and more an ultra-modern 21st-century castle. It’s in the stark materials, sure, but also its terraces, spiral staircases and a terrific turret that sits atop the property with jaw-dropping views across Loutit Bay. Otherwise, Ocean House’s openness to nature is what sets it apart, its floor-to-ceiling windows inviting in the ocean on one side and the Otways wilderness on the other.

Ocean House sleeps up to 10 people across five bedrooms, but can also be rented as the Ocean Apartment, utilising three or four bedrooms on the two lower floors. You’ll just have to fight over who gets the “round room”, the house’s signature circular bedroom.

The Victorian government has restricted public gatherings and recommends minimal social contact to minimise the spread of coronavirus. Some parks or tourist destinations in Gippsland may still be closed, or operating at reduced capacity. If you’re concerned about travel or visiting public spaces, or have questions about self-isolation and coronavirus testing, check out the latest from the Victoria Department of Health and Human Services.

This article was produced by Broadsheet in partnership with Tourism Australia.