A Road-Trip Guide from Auckland to Northland in New Zealand

Incredible scenery, world-class food and luxury accommodation: these experiences link the stretch of New Zealand between urban Auckland and the relatively untouched purity of Northland. In partnership with Tourism New Zealand, we help you navigate a journey up the northern isle. The Duke of Marlborough

There’s something addictive about New Zealand’s north. On the drive from Auckland up through Northland to the tip of Cape Reinga, the stunning landscape ranges from verdant green hills to black-sand beaches to vibrant farmland to sprawling old-growth bush. From this fecund region springs some of the nation’s best food and drink – and a sense of community you can trace to its people’s intuitive sense of respect for the land.

Here are the best spots to eat, drink, stay and explore on a road trip through New Zealand’s North Island.

Auckland
Here’s where you’ll start your journey: not the country’s capital, but perhaps its purring engine. Auckland’s not all business though – it’s also the site of much dining, drinking, dancing and culture. Once you make the short trip into town from the airport (as ably demonstrated by Prime Minister Jacinda Ardern, who recently picked up visiting US talk-show host Stephen Colbert herself), your options are more plentiful than your time. We suggest you head straight into the city. 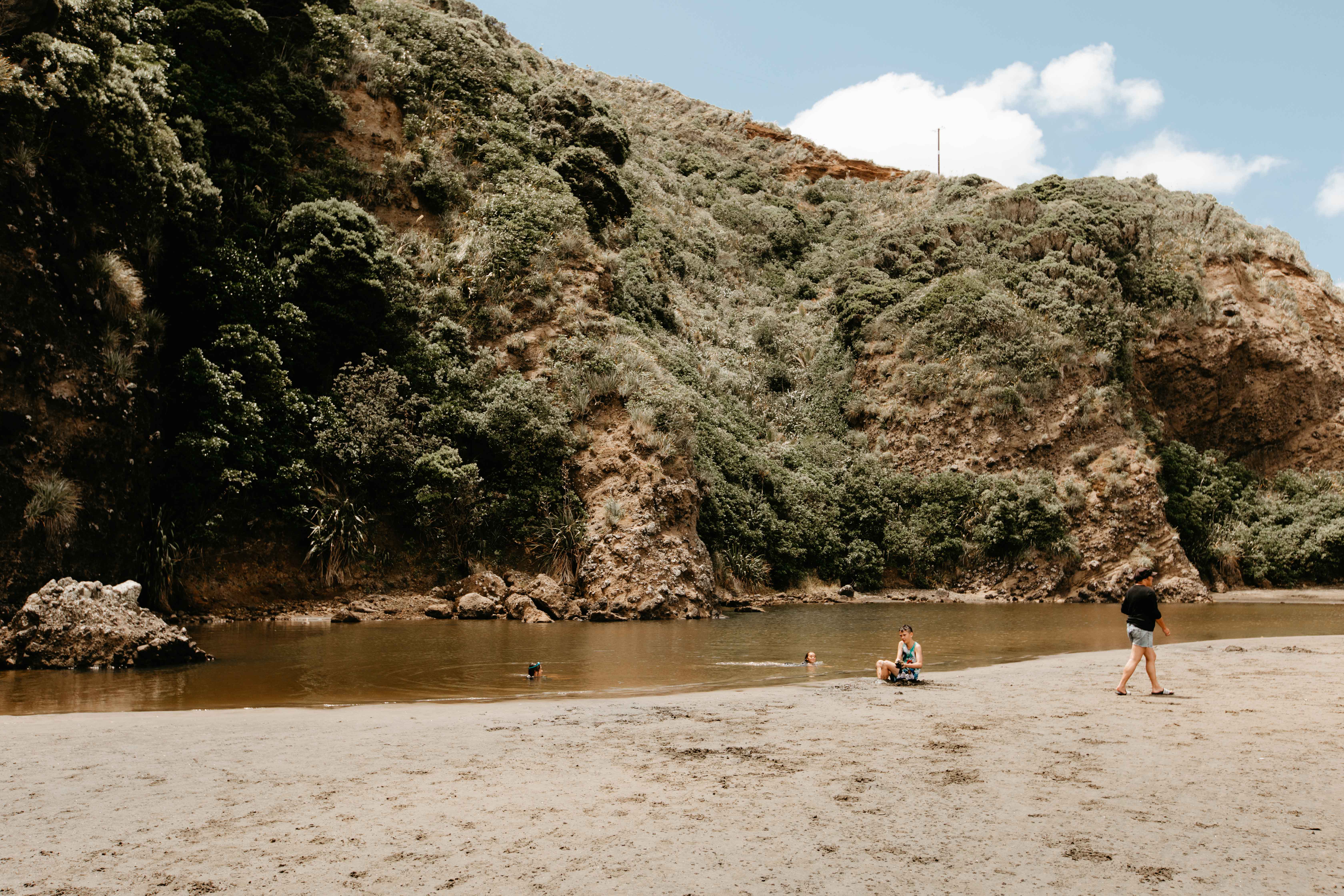 Amano
This special bakery and trattoria housed in a double warehouse by the wharf in downtown Britomart is a stand-out in all of New Zealand. Not only does it make sourdough, pies, tarts, pastries and pizzas in-house, it sources fresh local wheat which it self-mills. There’s pasta too, made with that just-ground 00 flour and free-range eggs from Whangarei. Thanks to direct relationships with farmers it celebrates wild-caught seafood (including sardines, piper, mackerel, scallops, herring and bluff oysters), resulting in remarkable dishes such as its spaghetti frutti di mare, made with mussels, prawns, fish, calamari, cherry tomatoes and chilli. Essential. 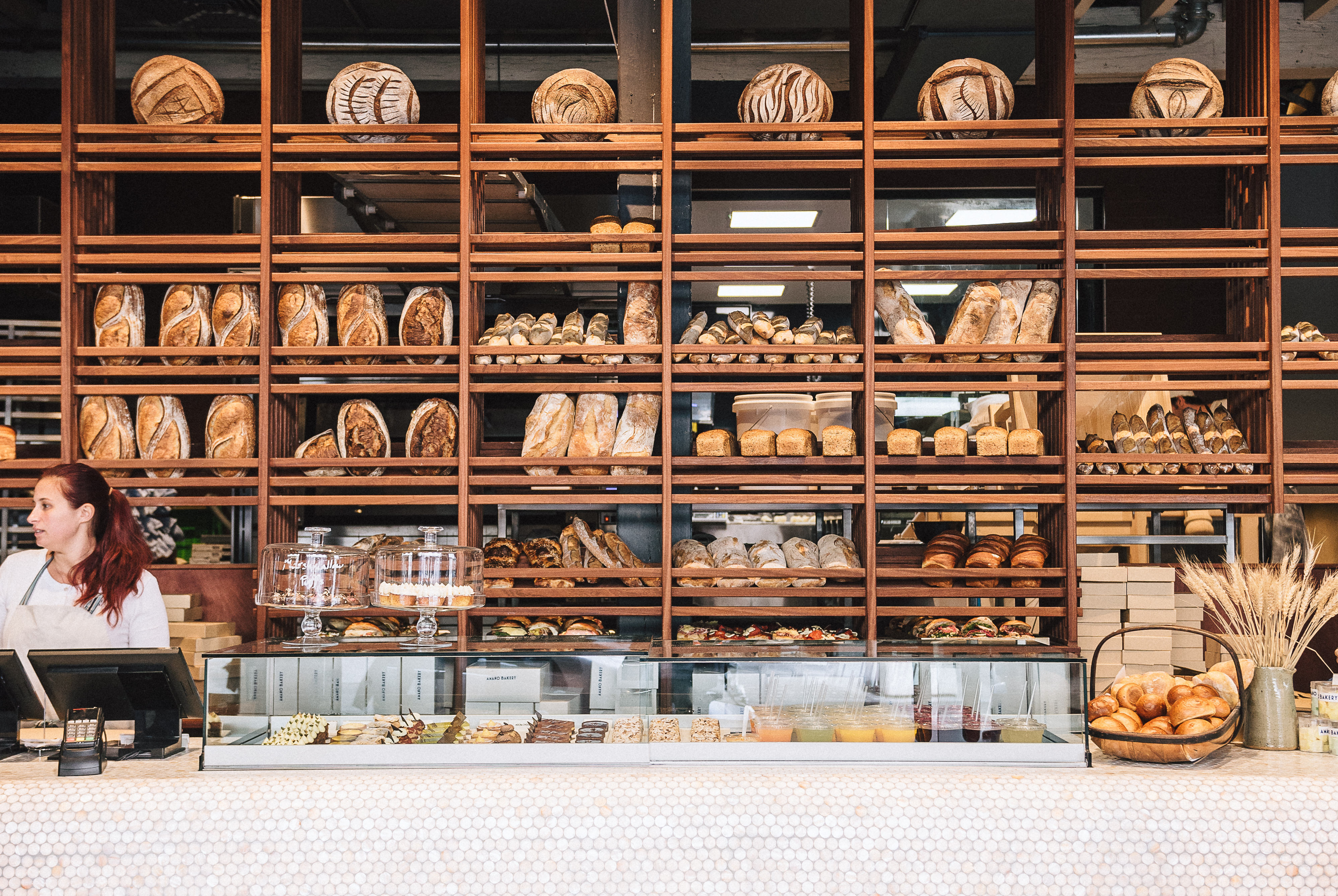 What you do between lunch and dinner is your own business, but you won’t be at a loss if you wander through the city’s centre and fill your satchel with goodies (there’s a fantastic Daiso on Queen Street, and the city edition of Recycle Boutique can frequently spark a retail frenzy). From there find yourself on the city’s hippest strip, Ponsonby Road, where it’s easy to lose time. Make sure you check out Tatty’s (an incredible collection of second-hand fashions) and have a quick espresso at Too Good (a cute little stand-up number) before landing at Orphans Kitchen.

Orphans Kitchen
Points of pride in New Zealand’s culinary history are many. The lamington. The pavlova. The … pineapple lump. But a new wave of chefs are exploring a tasty heritage that arrived in Aotearoa long before the Poms did. At Orphans Kitchen, executive chef Tom Hishon is exploring the notion of national identity through food. What’s eaten here is what grows here, and what grows here is greatly dependent on the area’s notoriously unpredictable weather.

So, in rhythm with the season, one night at Orphans Kitchen there might be kingfish tartare with yacon (a sweet potato-like root vegetable), lime and ginger; another night you might find lightly pickled and chargrilled red cabbage with feijoa treacle and lamb loin. That said, you can usually expect preserved fish and eggs for breakfast, or a T-bone steak anytime after lunch. Like the country itself, the kitchen is a comfy spot to relax, with its Nordic-farmhouse vibe and view of Ponsonby Road – the hippest strip in the city. 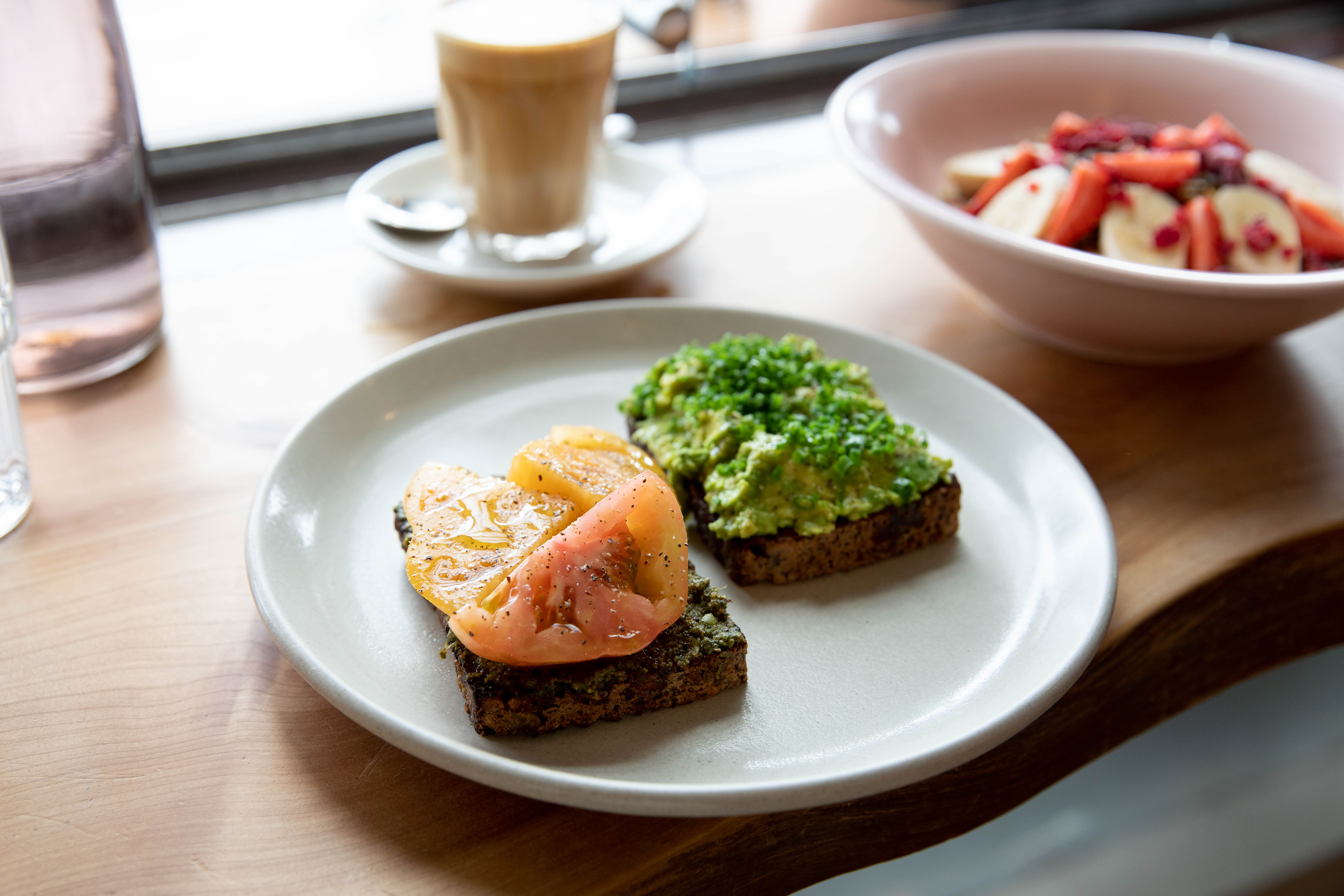 Clay
Clay is a new wine bar on Karangahape Road in Auckland with an exacting list of over 200 natural drops, and there’s a charming grassroots ethos to this handsome dispensary. Every day, staff pick seven bottles to serve by the glass, which they deliver alongside pizza. Ingredients are sourced from the community garden, and the long timber table and broken-tiled floor were made by the owners. You can also head to the Wine Cellar nearby, a slightly more informal affair, where wine and music flows freely. 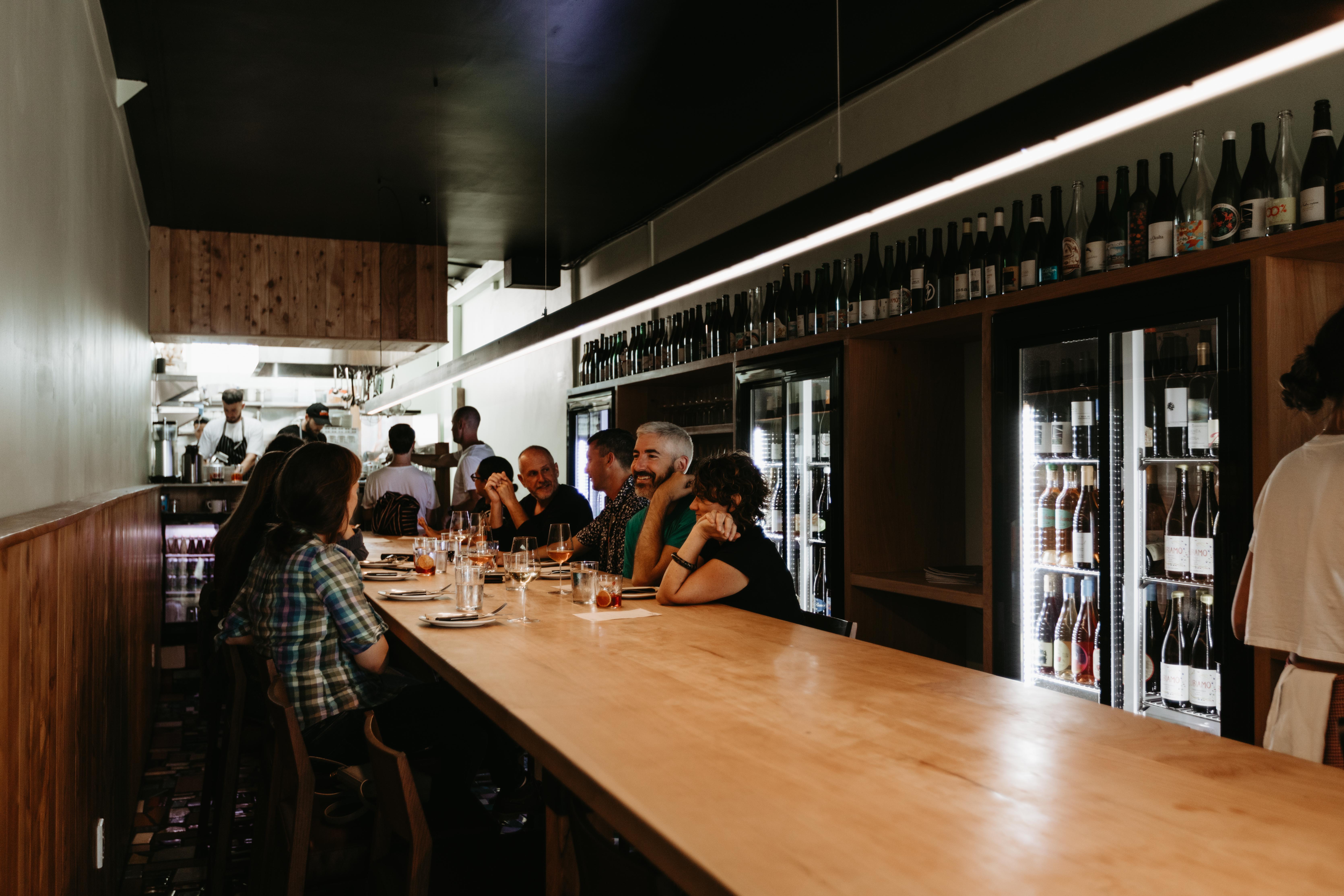 The space on Wellesley Street East in the CBD was once a fusty old building, but in 2012 it unveiled a decade-long renovation: the heritage aspect of the colonial nest is still intact, but there’s now a sweeping extension made from kauri and glass that speaks more appropriately of the institution’s importance. Inside you’ll find works from local icons Rita Angus, Gordon Walters, Len Lye, Colin McCahon, Marti Friedlander and Francis Upritchard.

World-class international shows tour frequently, but the excellent quality of Auckland’s gallery is better appreciated as a reflection of the city’s incredible art scene. You’ll need to purchase extra kilos for the book store.

If you want more art, there’s always something fascinating at the Gow Langsford Gallery, which is really just around the corner, and the Gus Fisher, which frequently hosts the best show in town inside its strange and beautiful little building. If you’re walking that way, pop into Unity Books, one of the country’s best booksellers. 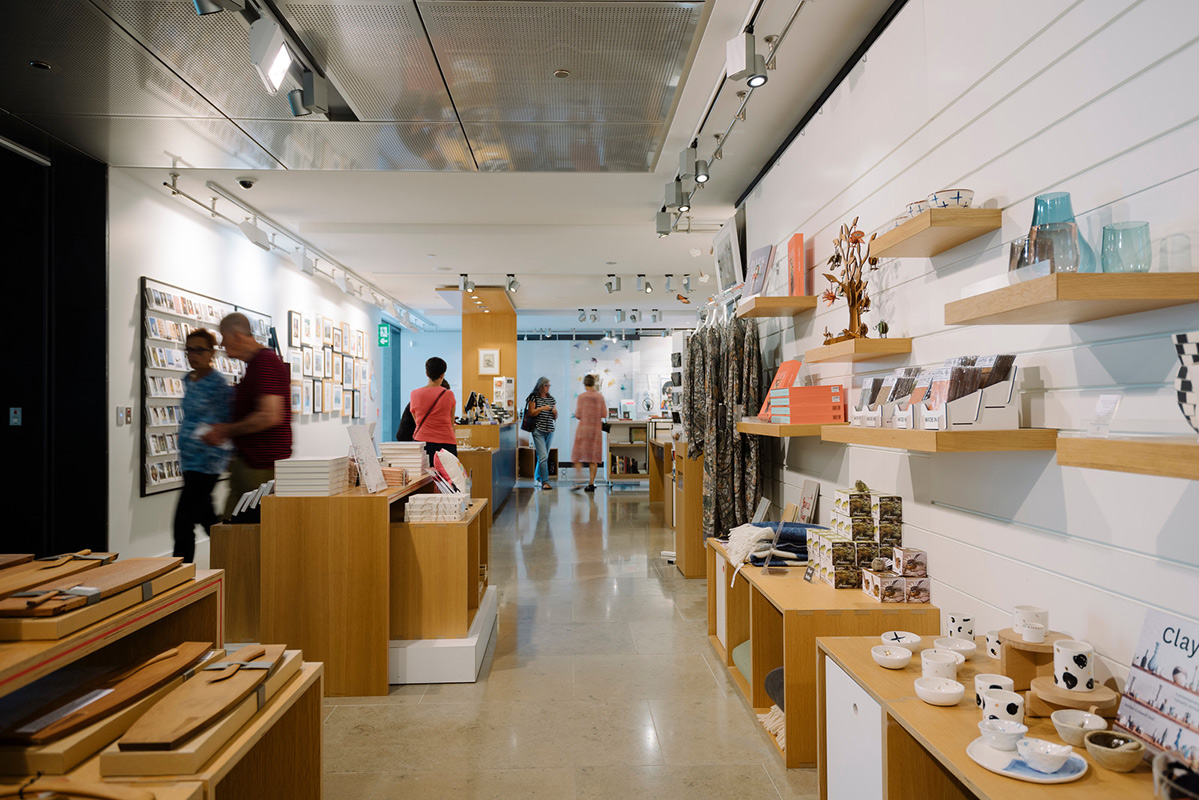 So Auckland
Locals and international travellers alike have reason to be excited about Auckland’s newest boutique hotel. So, a five-star number from Accor, has won four gold medals at the World Luxury Hotel Awards since opening in November 2018, including Best New Hotel in Oceania. Needless to say, it’s rather nice.

Hotshot designer Benny Castles of NZ label World is responsible for the eclectic decor. In the lobby you’ll find an oversized chandelier and correspondingly gigantic armchairs, while all staff wear sneakers and tees. It’s hard to define exactly what makes it cohere, except an eye for peculiar – and inviting – individual objects. All manner of modern luxuries are on hand, including a naturopath, a yoga guru and a bath butler, who – yes – runs a bespoke bath for you on command, with flowers, scrubs and oils.

The rooftop bar and restaurant, Hi-So and Harbour Society, are equally sophisticated. So poached super-fancy chef Marc de Passorio, the former owner of Michelin-starred Provence restaurant, L’Esprit de la Violette, to head up the menu, and the views over Waitemata Harbour and Rangitoto Island are unmatched. 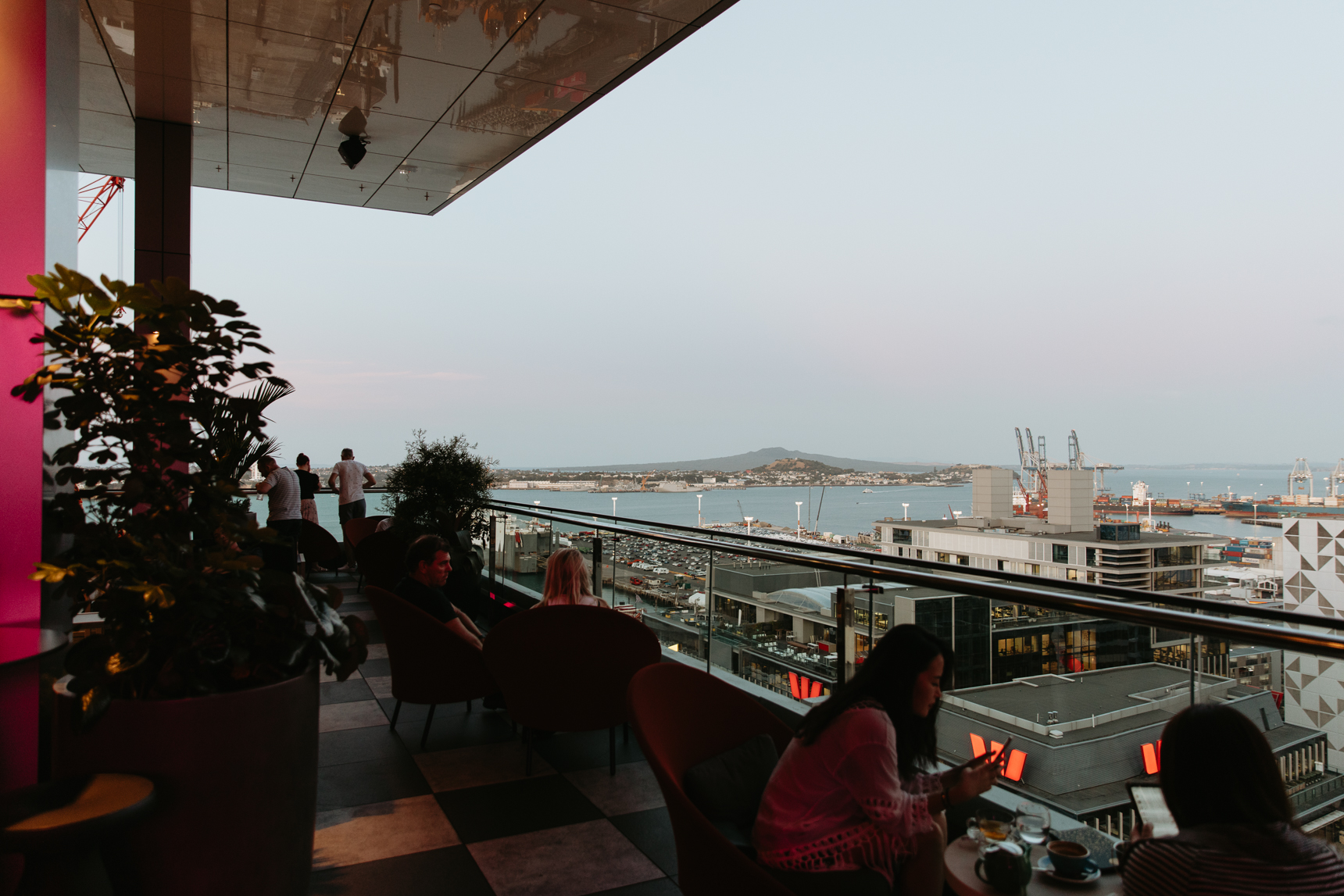 
Northland
Leaving Auckland is hard, except perhaps when the GPS is set for Northland. The northernmost region of the North Island is renowned for its gorgeous scenery, which undulates onwards as you venture to the tip of the peninsula, a good six-hour drive from Auckland. With bakeries, op-shops, natural hot springs and stunning scenery along the way, it’s worth setting out some extra time to explore. 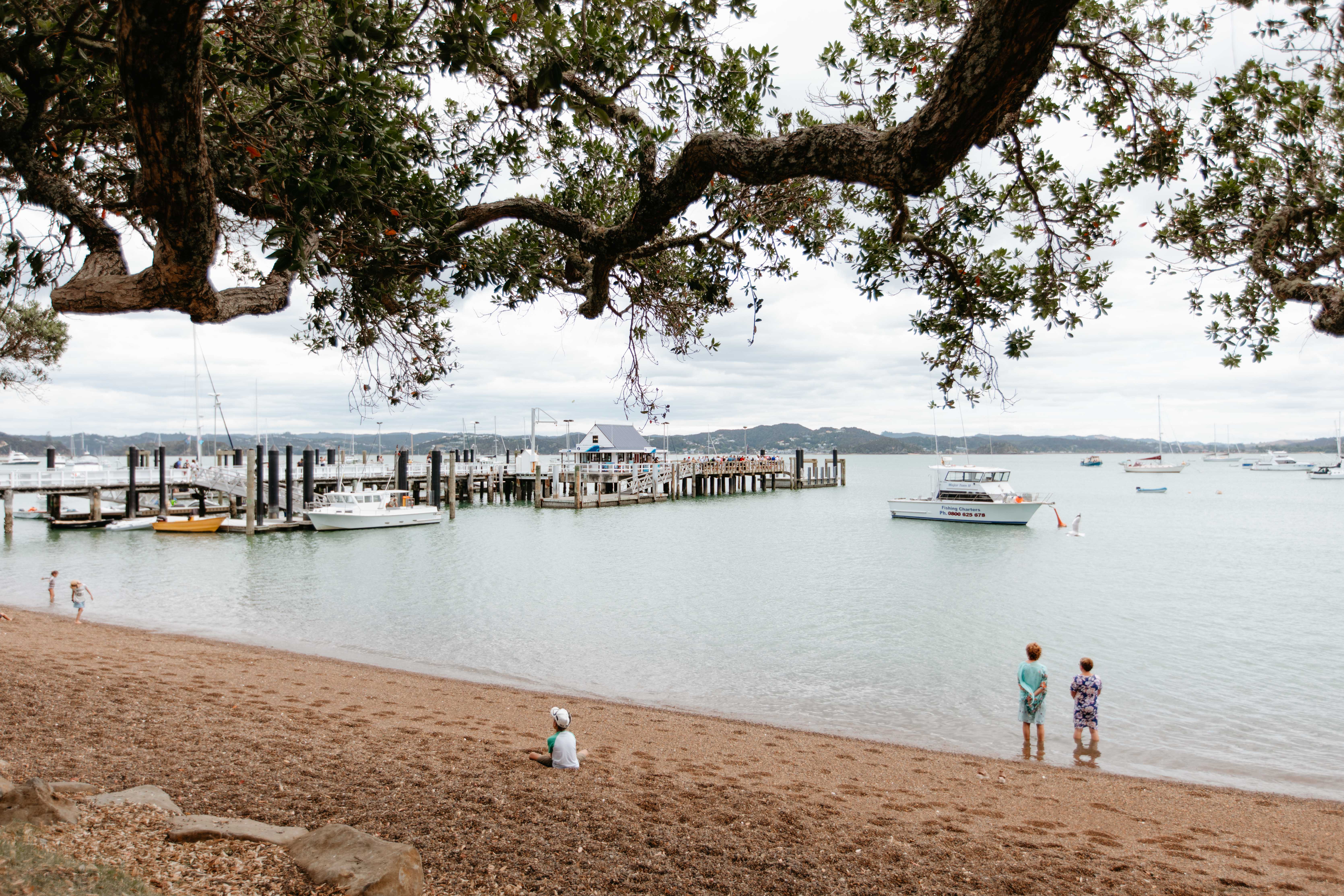 Mangonui Fish Shop
Mangonui Fish Shop is literally on the water. Here’s how it works: fishers sail in, drop their catch and you eat it. John Dory and kingfish swim underneath where you sit. To say the fish here is fresh is an understatement.

Perched on Waterfront Drive looking out over Mangonui Harbour, it specialises in line-caught fish (more ethical than trawling) and cooks only what’s in season, such as bluenose, hapuka, groper, snapper, blue cod, tarakihi, gurnard, lemonfish and hoki. They also serve the real-deal version of a Kiwi delicacy – the Paua Fritter, made from black abalone. These delicious snacks are extremely hard to come by: the daily legal limit is 10 per fisher, and you aren’t allowed to dive for them. But when someone promises whole Paua meat, chopped onion and parsley, egg white and batter, take them up on their offer. You won’t see it again for a long while. 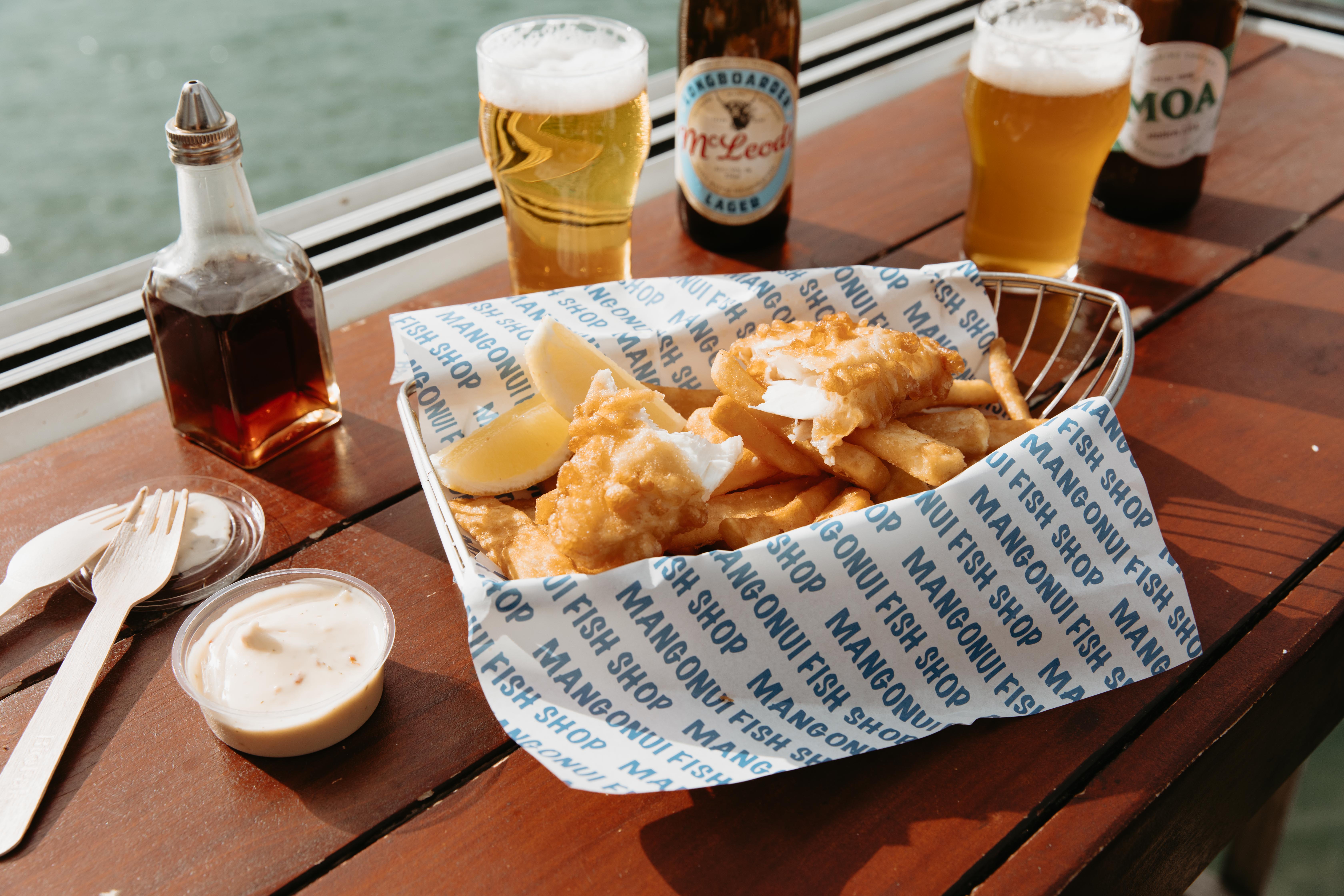 Omata Estate
James Busby is regarded by many as the founder of Australia’s wine industry – he emigrated from England to Australia in the 1820s with vine cuttings he turned into early iterations of wines from the Hunter Valley. In 1833 he moved to the Bay of Islands in New Zealand, where he planted the vine stock collected from Spain and France. It did well, with sea breezes and rich volcanic soils encouraging his crop. Busby died almost 150 years ago, but his wine is still going strong, with Omata Estate taking the reins in 1990. The 8000 vines here are mostly chardonnay and pinot gris, not to mention their old-growth syrah, which is what you’re really here for. That said, a hilltop with views of the Kororareka Peninsula is a fine place to rest with a bottle and its natural accompaniment: pizza. 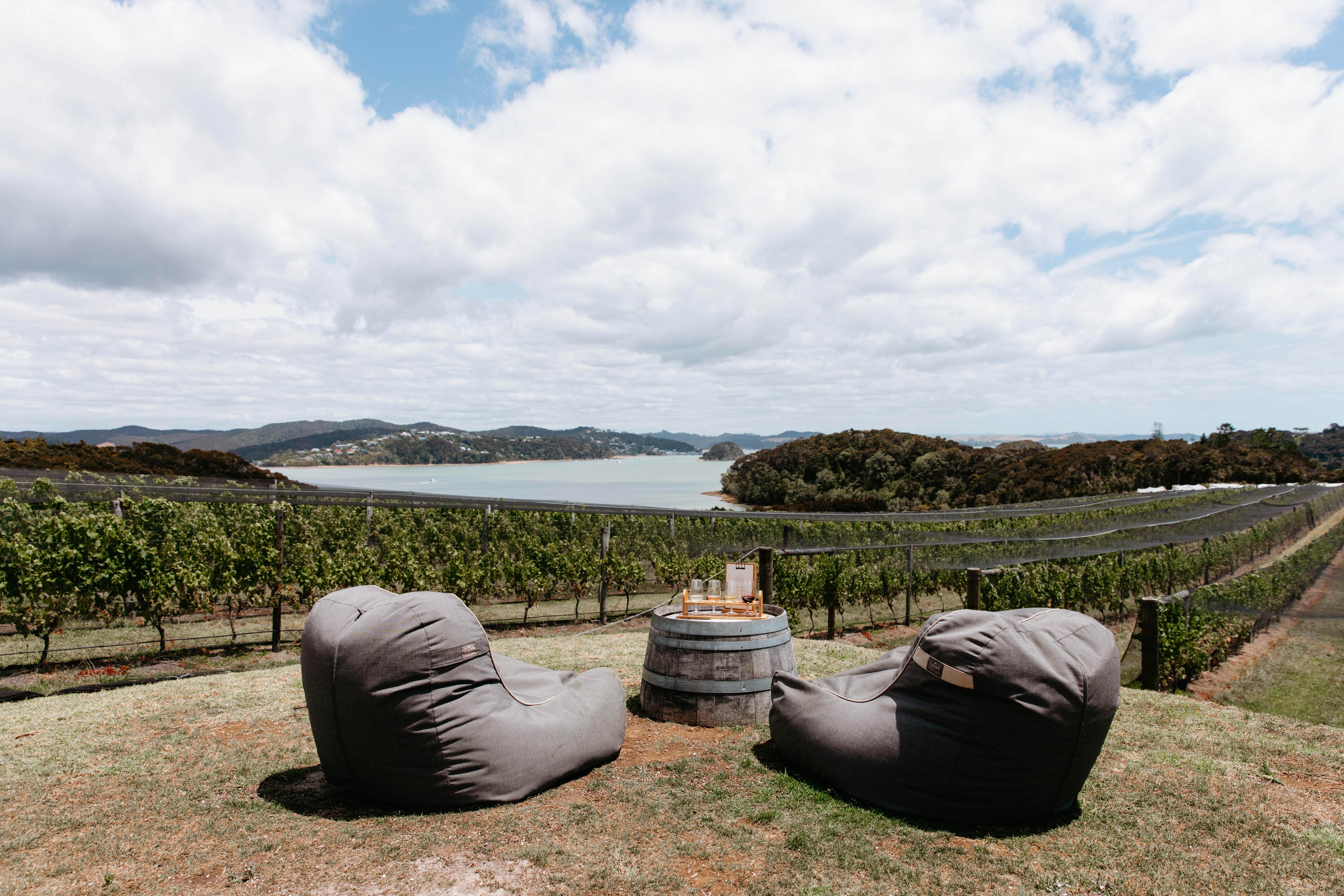 Whangarei Falls
When it comes to scenery, typical descriptions don’t do New Zealand justice. “Mountains” means sweeping, craggy, ice-topped wonders, true giants that stir the soul. So too with waterfalls – Whangarei is 26.3 metres of classic curtain-style falls, the kind you see in the movies. It’s worth stopping to admire this basalt beauty, as the local Maori did when they stopped here to picnic on freshwater eel. If sitting’s not your thing, the gambol to the falls is only two minutes, but there’s a three-hour tramp called the Sands Road Loop, where you’ll see kererū’ (native wood pigeon) and riroriro (grey warbler) amid the nikau palms and 500-year-old kauri. 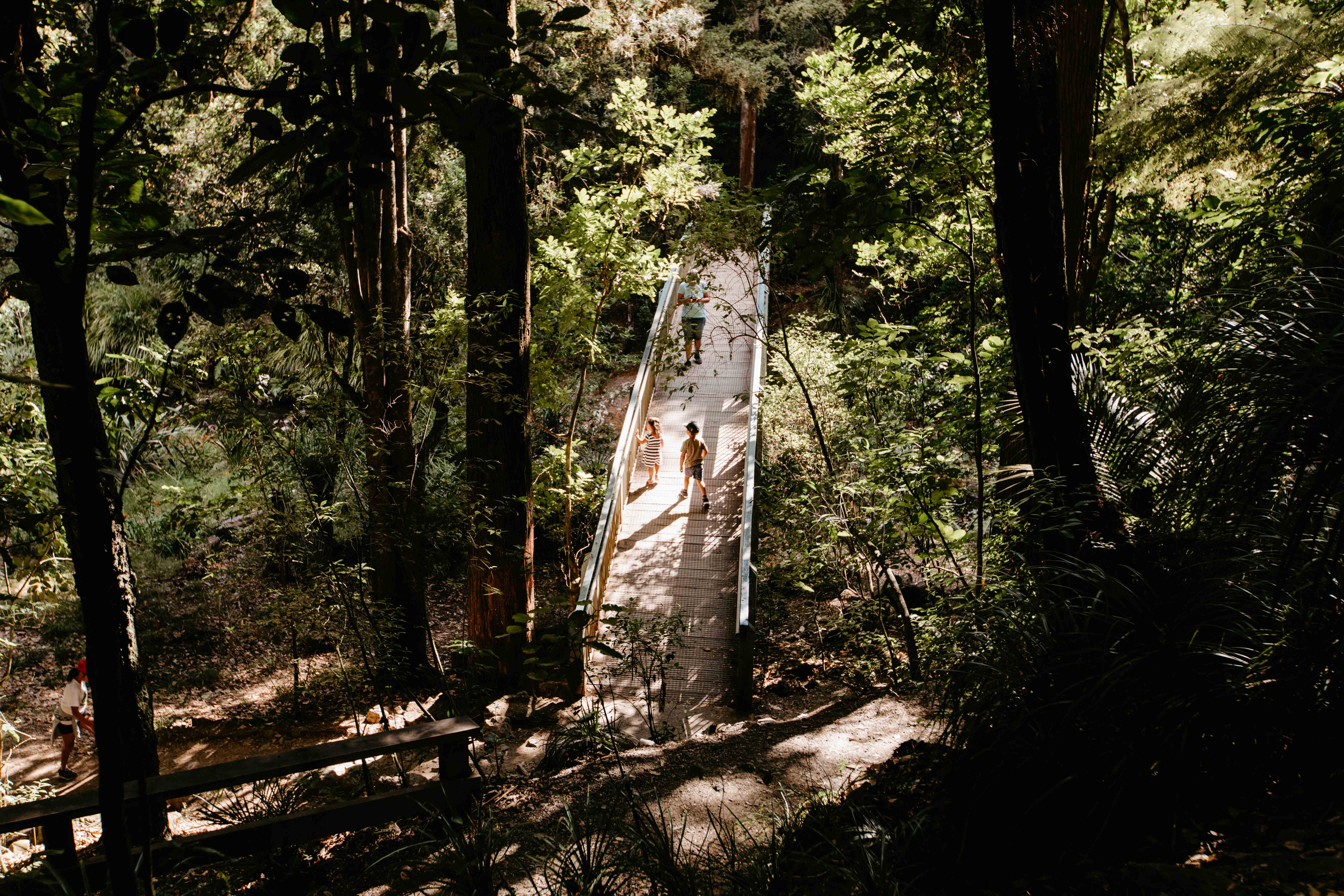 Cape Reinga
If you make your way to the top end of the North Island you’ll be rewarded with Cape Reinga, an isolated but genuine slice of heaven. Here, at the northern edge of Aotearoa, it’s said all Maori spirits travel onwards to their homeland, leaping forward after death in search of Hawaiki. This gorgeous place where the Tasman Sea mixes with the Pacific also boasts an 800-year-old pohutukawa tree that bursts into flaming red flowers each December. You can holiday here by making the 100-kilometre drive from the nearest village, Kaitaia, or walk the Te Paki Coastal Track, which takes slightly longer – three or four days – but passes by Spirits Bay, Ninety Mile Beach and Te Paki Stream. Or you can take a joy flight over the top of the whole thing, which is presumably exactly what the spirits do. Kia-ora.

The Duke of Marlborough
That this grand pub is called The Duke is proof the universe has a sense of humour. Far from any aristocratic origins, the original name of this august establishment in the waterside town of Russell was Johnny Johnston’s Grog Shop, which it was, because Johnny Johnston sold grog there. He also had a licence, which was given to him by his old mate the governor – the first liquor licence in the country.

The definition of grog has changed since 1827 of course, and you can be sure that the current wine list is much more extensive than Johnny’s stock. In fact it’s fabulous, as is the menu, which features homemade focaccia, local Waikare Inlet oysters and a 1.2-kilogram slow-roasted Northland lamb shoulder.

Sleep here in comfort in a breezy beachside room featuring just the right amount of colonial class and golden textiles. The top-tier rooms have views of Paihia and the Waitangi Treaty Grounds, but standard rooms still offer views of Russell from the long white verandah. 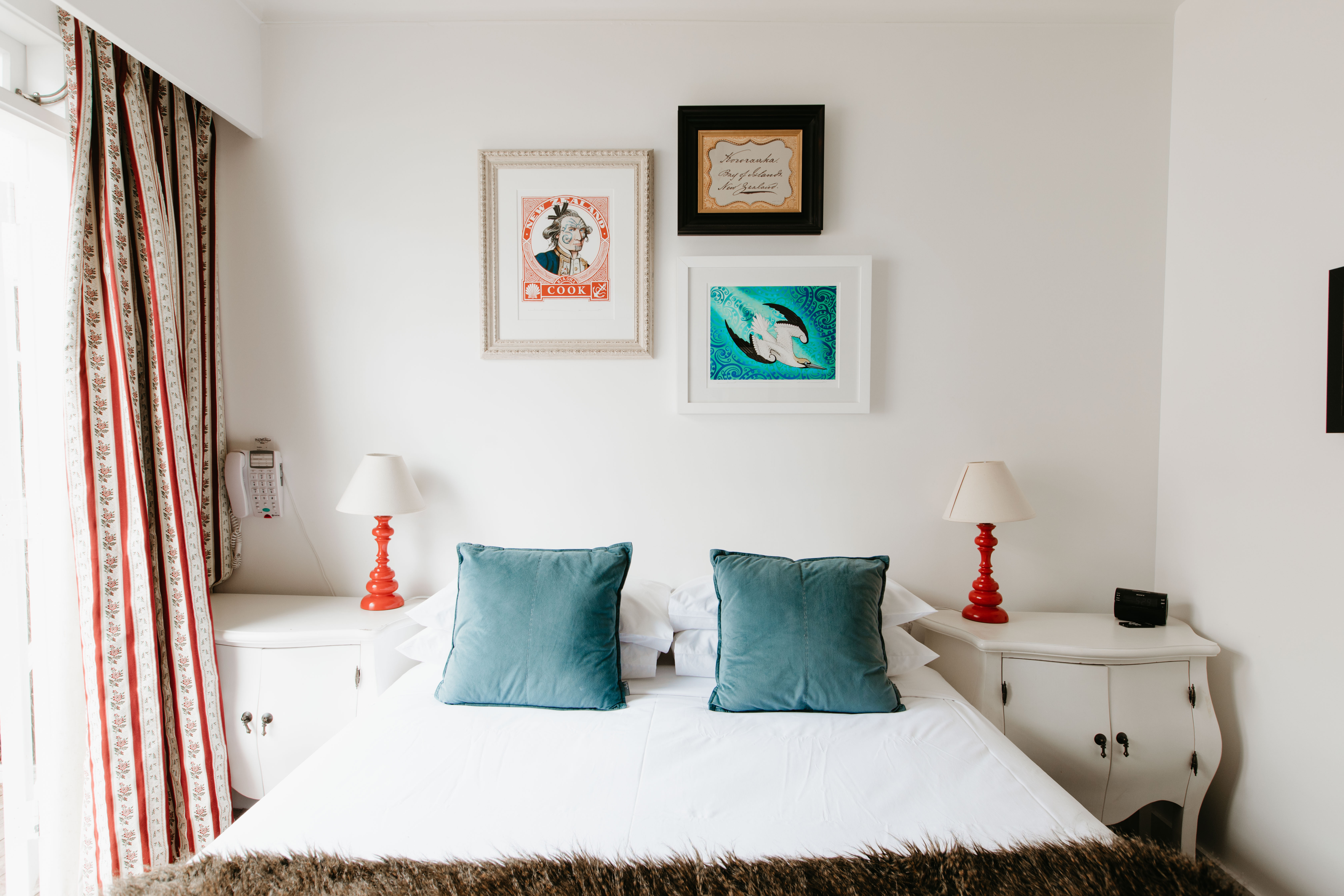 The Duke
35 The Strand, Russell