Real Moroccan Food and Where to Find it

Pies cooked under the sand, rich tagines thickened with onion gravy, egg doughnuts sold on the street and the best pears on earth. In partnership with G Adventures, we discover Morocco’s culinary secrets. 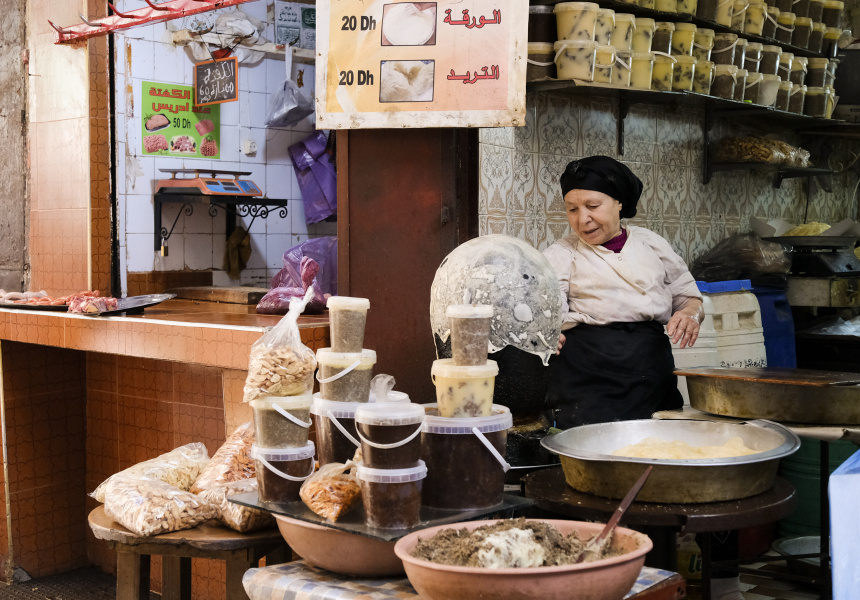 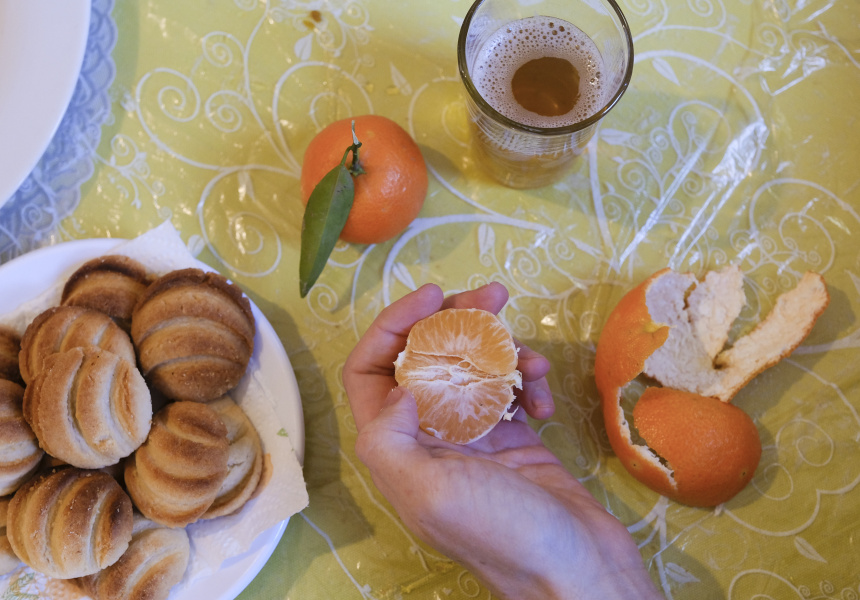 “Hey Lahcen, what is the speciality of this region?” I ask our guide – or ‘Chief Experience Officer’ – Lahcen Taallate, a local of the area.

We’re driving through the desert. We’ve just returned from a camel-back mission to our camp on the high sand dunes of Erg Chebbi. “What is the local speciality?” is the same question I ask everywhere I go, and I’m not the only one on the bus intrigued by Taallate’s mysterious answer. He’s got everyone’s attention.

He explains: it’s pizza stuffed with meat and baked under hot sand. I look it up later and find out its name is madfouna and that it’s a little more like a pie. It’s an Amazigh (also known as the Berber people) recipe; get a fat ball of elastic olive-oil-infused dough and stuff it with beef, eggs, nuts, garlic and spices. In the desert, where resources are thin, you cook it by lighting a fire, heating rocks and placing the dough with the hot rocks under sand. Once it’s done you brush the sand off, chop it up into triangles and eat it, kind of like a pizza. Taallate explains that this isn’t an everyday kind of food.

Moroccan cuisine is a marvel. The place only spans a small stretch of land but it harbours a rich and varied cuisine that’s radically different from any of its neighbours’. The most famous and fundamental dish is tagine, a stew (there are hundreds of different kinds) cooked in a terracotta pot with a lid that looks like a witch’s hat (the pot is also called a tagine), and various styles of couscous.

It is predominantly a home-focused cuisine. There may be incredible variety, but outside of the home it can be hard to find things not included in the trio of tagine, couscous and barbequed skewers of meat. Madfouna is certainly one of those hard-to-find dishes.

An hour later, after the initial inquiry, when the rocky desert sands start to reveal distant snow-capped mountains and enormous and oddly isolated rock formations, Taallate turns to us and asks, “How many people want to eat desert pizza?” Everyone, all 13 of us, put our hands up.

While the rest of the bus exchanges stories of hunting moose in Alaska, everyday life in Bermuda and regional differences in Mexican cuisine, our guide makes a few phone calls. Eventually, after seemingly interviewing all his local contacts about who could possibly make a madfouna, he turns to me with a cheeky smile.

Later that day we arrive at a Moroccan weaving cooperative where rugs are made the same way they were 100 years ago. They show us how the weaving’s done and, once we’ve heard the weavers’ stories and seen them at work, we’re taken upstairs to a family table setting where we meet a chickpea soup, an artfully arranged four-part salad and our first ever desert pizza.

Before we started this tour, none of us had ever heard of madfouna, and if it wasn’t for Taallate, it’s unlikely we ever would have.

This isn’t the only time I feel like this. On the second day of our journey, we stop in a small town outside Meknes. It’s not a common tourist site, but a regular rural Moroccan village. We’re stopping because it’s the site of a unique social project.

Started by Wafa El Kabbaj in 2012, Planeterra is the name of G Adventures non-profit partner. This joint project, the AFER Women's Association Homlunch, is a rural NGO that empowers Moroccan women by providing them with skills and business opportunities that are relevant to their local communities. They may teach one woman how to make traditional rugs, another to transform home cooking into a scalable business. The money they make is used to provide education, medicine and support to not just women in the programs but any women in rural areas who need help.

But we’re not only here to listen to stories of progress – we’re here to taste the home cooking too. Three local women have prepared us a home-style meal. Like many Moroccan feasts, it starts with olives. Moroccan olives aren’t like Australian olives, nor the olives we import from Europe. Their flavour is far more powerful.

Then it’s onto salad and a personal bowl of stewed lentils. Well, by salad I don’t mean a few bitter leaves tossed with oil. Salads, and sides generally, are a big part of Moroccan dining. We get two here, an earthy mashed spiced eggplant, and a lemony and slightly sweet tomato, cucumber and capsicum mix.

Every Moroccan family meal is eaten with bread, usually khobz, a semi-soft wheat-based creation somewhere between flat Turkish bread and a dense sourdough. The idea is to tear a piece off the loaf and use it as both the staple of your meal and your cutlery – dip it, use it as a clasp, or arrange a miniature bread bowl and scoop with it.

The final course, the pride of the kitchen and the source of our bread’s future attention, is an enormous and powerfully rich chicken and onion stew. Chicken and onion is not chicken that’s been cooked with onion. Moroccans are not shy of pungent ingredients and onions are used extensively, almost always cooked for long enough to make them entirely devoid of texture but crammed with umami. To balance out the richness, there are sprigs of preserved lemon and onions providing sourness and punch.

While we’re marching through the thin, bustling alleys of Fes, our local guide points to some of his favourite snacks. When our eyes and ears perk up, he stops. In one street we spot a black circular grill. It has a thin, crepe-like dough sizzling on it. Our guide scurries into the shop front, just a small space barely bigger than a supermarket checkout. He whispers something to the stall host who dexterously takes the sizzling dough from the grill, places it a sheet of butcher’s paper and hands it over with a giant clump of almond and fig jam.

He explains it’s a traditional breakfast flatbread to be eaten with jam or butter and preserved meat. He passes it to the nearest person and says, “Eat”. That day we also try freshly cooked doughnuts embedded with fried eggs, and Moroccan shortbread-like biscuits.

Around the time of the great desert-pizza inquiry, we try camel milk. The prompt is only my curiosity; I simply said I’d be interested to try it. So when our guide sees a ramshackle mud-brick home with a sign on the side of the road we stop. For the curious, it is not particularly different to cow’s milk, but it’s thinner, less fatty and noticeably saltier.

But none of the above was the gastronomic highlight of the country. That fiercely competitive title goes to: fruit. The produce of Morocco is inexplicably superior. In just eight days I had the best date I’ve ever had in my life, the best mandarin I’ve ever had in my life and the best pear, too. It’s hard to point out exactly what was different about them, just that they were better in every way – juicier, sweeter, softer, crisper. If you need a reason to go to Morocco, make it a pear. Go there just to eat the best pear of your life.