Dine at a clifftop restaurant perched above an idyllic beach; board an old-school double-decker bus for a unique wine tasting; stay in a tiny converted shipping container among the vines; and more. Wine country meets the seaside in McLaren Vale. In partnership with Tourism Australia, we check it out. Wine country meets the seaside in McLaren Vale, South Australia, a world-class wine region best known for shiraz but now with around 80 cellar doors – many with restaurants attached – representing the breadth of the state’s winemaking prowess.

The views really are something else, too. Lap them up while sampling small-batch wine, award-winning gin and pizza at a three-in-one venue on a hilltop; cosied up in a luxe, self-contained guest house (with a jacuzzi); or on the penthouse floor of a five-storey Rubik’s cube in the middle of a vineyard.

Here are 12 of the best spots to eat, drink, play and stay in the area. They’re all less than an hour’s drive from the Adelaide CBD, making McLaren Vale the perfect spot for a relaxed daytrip or even a weekender.

The Salopian Inn
Plonked on a corner among McLaren Vale’s vineyards, in a refurbished 1851 homestead, is a regional diner worth travelling for. It’s by star chef Karena Armstrong, an SA local whose CV also lists Icebergs and the now-closed Billy Kwong in Sydney, and Lake House in Victoria.

Over the past six years, the restaurant’s kitchen garden has grown from a tiny plot to around three quarters of an acre, providing a large portion of the fruit, veggies and herbs you’ll find on your plate. The menu is, of course, seasonally driven. But don’t go past the pillowy signature dumplings, often stuffed with pork and kimchi, or the equally airy steamed buns, which might encase red braised free-range pork, ginger and hoisin.

Booze-wise, descend the stairs into a historic cellar to hand-pick your own bottle, or choose from an expansive list of more than 200 local and international gins.

Pizzateca
In 2016, Tony Mitolo, his father Vito and their mate Tim Anderson set about opening a pizzeria. They created an empire, complete with a pastel pink and green shed that’s become an Instagram sensation.

Here, an imported Italian woodfired oven turns out hybrid “Oztalian” pies inspired by Tony’s time in Italy, the US and at home. And they’re considered by many – this writer included – to be the best in the state.

For the full experience, rally a group of mates and dive into the menu fisso, which includes a ton of pizza, charcoal-grilled arrosticini (Abruzzi-style lamb skewers), nonna’s tiramisu, and more.

Star of Greece
Firstly, Star of Greece isn’t a Greek restaurant. (It’s named after a ship that sunk nearby in the late 1800s.) But, perched on a clifftop overlooking idyllic Port Willunga beach, it has the kind of view that will make you forget about your cancelled European holiday – and you can soak it up from almost every seat in the house, including the wide, sunny deck.

Given the locale, it’s no surprise seafood – often sourced from Kangaroo Island – reigns supreme here. Go classic with expertly done fish’n’chips or salt-and-pepper squid, or for something more lavish opt for Atlantic salmon with white-bean puree, charred cos and pickled white anchovy.

The adjoining kiosk, a summer favourite that recently had a facelift, is chef Karena Armstrong’s pick for some of the region’s best fish’n’chips.

Russell’s Pizza
Also in Willunga – though a little further inland – is this laidback, all-occasions pizza joint in an 1850s Welsh miner’s cottage. Outside, there’s a roomy area that’s great for al fresco drinking and dining in the balmy months and has a firepit for the winter.

It’s also worth noting Russell’s is BYO-friendly – you’re more than welcome to rock up with an esky of tinnies, or half a dozen bottles you’ve picked up at neighbouring wineries.

Alpha Box & Dice
Cellar doors can sometimes be intimidating. But this place, in a rudimentary shed among a plot of vines, isn’t one of them. That isn’t to say that the team of young guns behind Alpha Box & Dice doesn’t take wine seriously – it’s been pushing the envelope with progressive, mostly European varietals since 2008.

For 10 bucks, sip your way through eight picks from the “Alphabet of Wine” on a guided tasting. (The Dead Winemakers Society Dolcetto is our pick.) But it’s really only as educational as you want it to be: get the full rundown, or just grab a bottle and a cheese platter and plant yourself on a comfy armchair in the sun.

Chalk Hill Collective
After a long-awaited opening in early 2020, this triple-pronged beast is now a joint home for three SA greats: family-owned small-batch winery Chalk Hill, award-winning gin distillery Never Never, and the pizza people behind Pizzateca and Madre. Plus, it’s got lush, uninterrupted views of the surrounding region.

Here, it’s something of a choose-your-own-adventure, but our recommendation is this: start with a wine tasting at the Chalk Hill cellar door, move into Never Never for a G&T flight, then finish on the lawn with a crunchy pizza-focaccia hybrid (with a side of mozzarella sticks and arancini) from the low-key Italian canteen.

Down the Rabbit Hole
At this McLaren Vale winery – which is boho chic in the best way – it’s as much about the vino as the experience that goes with it. For most of the intimate, laidback tastings, it’s all aboard an old-school double-decker bus, which is baby blue with a clear roof and space to comfortably fit 10.

Walk-ins are welcome to roll out a rug on the grass, pick up a bottle of light rosé or silky shiraz, and dig into a grazing platter stacked with locally sourced meats and cheese. Just make sure you hang around for golden hour – it’s pretty spectacular here.

Gemtree Wines
Perhaps best known for its deep reds, this organic and biodynamic winery now has a cosy tasting room in McLaren Flat with sea views and beautiful vineyard. Plus, just like the wines, this place is environmentally conscious – built from recycled materials, solar powered, and reliant only on rainwater.

Pull up a seat on the deck and familiarise yourself with the label during a personalised guided tasting. (It’s $20 for a five-wine flight.) But if you’re after something a little more casual, grab picnic supplies and a bottle of wine from inside and then find a spot on the large, open lawn.

Container 65
A tiny house may not fit all your junk, but this converted shipping container – down a secluded dirt track in the middle of wine country – is an ideal base for a minimal McLaren Vale weekender.

It was built in 2018 by Saffy Ossa and her husband Dom, who co-owns and runs local roaster Dawn Patrol Coffee. Exposed pine and industrial finishes feature heavily throughout but it still feels remarkably homey. (There’s even a kitchen so you can cook your own brekkie.)

You’re guaranteed peace and quiet here, especially while kicking back on the spacious deck. Although you may encounter a sheep named Dorothy, an alpaca called Alf or a couple of roaming chooks.

The Vineyard Retreat
Looking to splash out? Dotted on a lush, 15-acre working vineyard – not too far from some of the region’s finest restaurants and wineries – are six ritzy, self-contained guest houses (with options for two or four people).

Each one has a private deck with cracking outlooks, a wood combustion fire and luxe bed linen, as well as locally sourced breakfast staples and a fully stocked – and complimentary – mini bar.

Plus, all guests also have access to a jacuzzi that sits on the highest point of the property, overlooking the towering d’Arenberg Cube and Gulf Saint Vincent.

“The idea is when you have a glass of wine, and I have a glass of wine, we have a different reality, we think of the wine differently,” d’Arenberg chief winemaker Chester Osborn told Broadsheet in 2018. The interactive displays are intended to heighten your senses before you proceed to the shiny, sun-drenched penthouse for a tasting.

Expect a “wine aroma room” plastered with flowers on one side and fruit on the other, an immersive 360-degree video room, and another room with thousands of floor-to-ceiling strips of VHS tape.

It was the first farmer’s markets established in the state, with dozens of stalls setting up in the Town Square each week. There are piles of vibrant, locally grown fruit and veg; meat from the surrounding regions; pantry staples such as olive oil and honey; and more.

Also keep an eye out for regular stallholders such as Small World Bakery, Woodside Cheese Wrights and Fleurieu Milk. 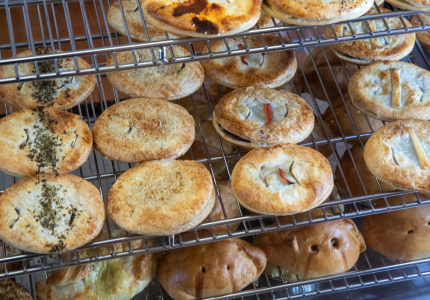