Oh, the Places We Swim 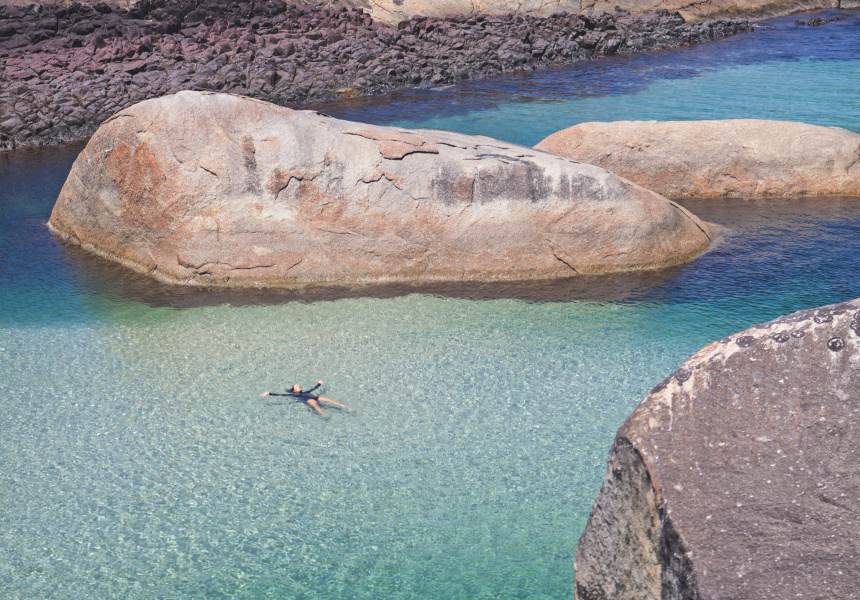 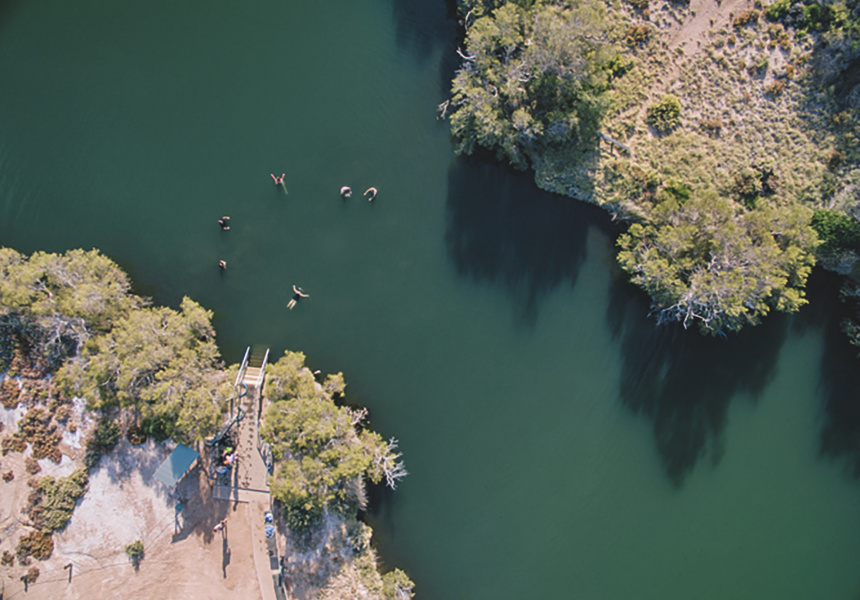 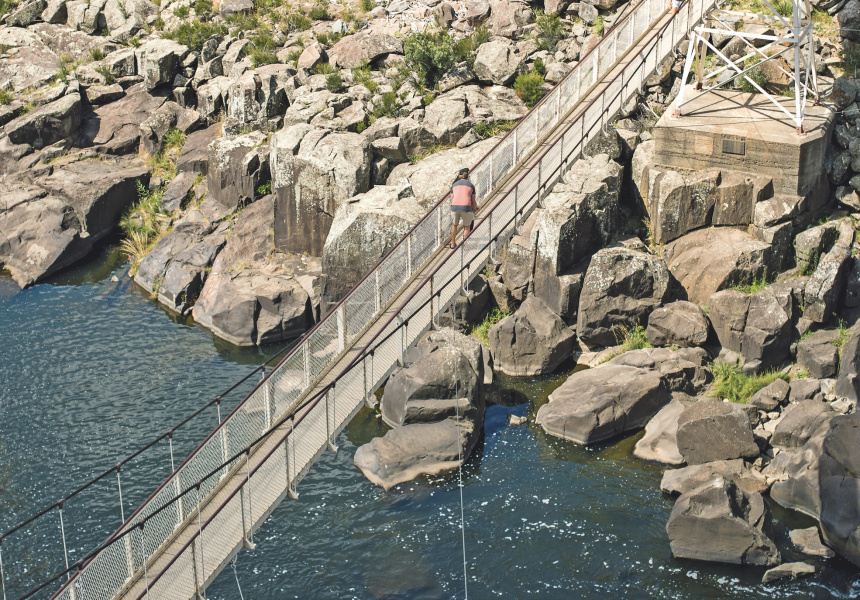 The first post on the Instagram account PlacesWeSwim shows a 25-metre pool in Jugiong. It’s about three hours south of Sydney, and it’s where Caroline Clements and Dillon Seitchik-Reardon found themselves after breaking down on the Hume Highway, in 35-degree heat, in December 2016.

This marked the beginning of an almost two-year journey exploring and documenting Australia’s most extraordinary swimming spots. Ocean pools. Gorges. Lakes. Waterfalls. Hot springs. After gaining a following on Instagram, the couple secured a book deal and began their official Australian circumnavigation – in a Troupie with no working speedometer or petrol gauge – in June last year. They finished up about nine months later.

“The beauty of the book is it's quite diverse. It really does capture all these states and how much [the country] changes. We were really trying to get that snapshot, the feeling, the identity and psyche of people and the landscape,” Clements says. “[Australians are] so connected to the coastline and beaches – most of the population lives near the ocean, so we're used to that movement of water. But there's all this inland swimming culture as well.”

One of the first places they covered was Dalhousie Springs, a remote artesian hot spring in Witjira National Park in the top corner of the South Australian desert, on the fringe of the Great Artesian Basin.

“The landscape 1200 kilometres inland could be another country – it could be another planet,” Clements says. “You drive eight hours over corrugated road. There's nothing: there's no life, no trees, you barely see a flower at the side of the road, and then you come to this incredible green vegetation. There's a couple of pools but only one that's swimmable and it sits at about 38 degrees – it's like a bathtub.

“People go out of their way just to find this spot, and you stay overnight. You swim either late at night or early in the morning and soothe your body in this incredible water.”

Places We Swim, out now, is filled with striking photos of springs like Dalhousie, as well as woolly coastal beaches, copper-red gorges and classic inner-city pools. Each entry includes practical information such as the best time to visit, how to get there, cost of entry, whether it’s kid or dog friendly, the water temperature, facilities (showers, toilets, camping) and must-brings (food and water for two days worth of travel, a spare jerry can of fuel).

“The questions we'd ask ourselves every time we came to a place was: do you want to spend the whole day here? Would you want to bring a visitor here from overseas?

Some entries have a “Local Knowledge” section, filled with need-to-know gems: “Take a dip early in the morning to see mist rising from the pool’s surface”; “Further down the tourist drive is 10 Mile Lagoon, a clothing-optional beach, if you prefer to go without”.

There’s also a section on crocodile safety – a reminder of how complex and diverse the Australian experience is.

“Our top spot in Darwin is a public pool because it's on the beachfront. But you can't swim in the beach there – there's crocs,” Clements says. “It is something you don't think about when you're from Sydney or Melbourne or the south, and then you get past a certain point in Queensland and the top end, and all of sudden it's all you’re thinking about.”

Alongside remote coastal inlets, bore baths and desert springs, there are icons of Australian swimming culture: Icebergs pool in Sydney, Whitehaven Beach in Queensland, Cottlesoe Beach in Perth. These are the places Australians swim every day.

“There's some real classics because they're actually the places that most of the population do swim every day,” Clements says.

The pair began with a list of places to visit gathered from general research, friends and parents of friends (“they were some of the best resources”) but naturally some of the best tips came from locals, or those who were already on the road.

“A lot of these people are on 12-month trips and they've got a list on a napkin of 100 places to go to,” Clements says. “You're not a pioneer out there. Everyone thinks you're going out into the abyss, but there are so many other travellers having the time of their life out there.

“A lot of the people are retirees or people who have taken a year off to do the trip of their lives. People our age [in their twenties and thirties] – they're going overseas, they're not looking on their doorstep. We found we really gravitated to young people when we found them, but they were few and far between. We were a bit eager trying to make friends out there,” Clements says with a laugh.

The most surprising spot
“Probably Jim Jim Falls in Kakadu National Park. We had a competition about how high it was – I thought it was like 700 metres high. It was 250 metres. You can actually walk around to the top, and the shots from the top of the waterfall looking down onto the pool below were so dramatic – it looked like a drone shot it's that high. It's not necessarily a really easy place to swim because you have to walk in over rocks for two kilometres. We didn't include it as a place, but we included it in Honourable Mentions. In places like Kakadu it’s so dry and so dusty and then you get to these water holes and there's so much life and vegetation and water just buried into these gorges. There's also this funny little beach.”

The wildest spot
“There are places that we didn't include in the book because they were too wild and too far out for swimmers. A lot of those places are really good surfing spots. A lot of the West Australian coastline is pretty wild. Victoria is super wild – the Great Ocean Road towards Warrnambool is pretty woolly. South Australia is like the state of isolation. There are all these peninsulas and people just want to be far away from everyone, it feels like. So you're often by yourself in the swimming spots. There are spots where you're standing on a sand dune and you feel like you could be in the desert.”

Caroline’s favourite spot
“On the south-west corner of Western Australia in Denmark, a place called Greens Pool. The town doesn't have a public pool, so everyone swims in this giant, naturally occurring rockpool, which is bound by these big granite boulders. It's very protected, so kids have swimming lessons there, local swimmers swim there. It's pretty wild but it's also this incredible rich, lush landscape. That was one of the places where we were like, ‘Shit, we do not want to leave’.”

Dillon’s favourite spot
“He was blown away more by some of the places up around the Ningaloo Reef, which is up around Exmouth, which is world's largest fringing reef. It fringes around the coastline, as opposed to the Great Barrier Reef where you have to take a boat out for hours off the coast. This is like – you walk out from the beach and you're right on the coral reef. It runs for hundreds of kilometres down the coast.”

Places We Swim *is by Caroline Clements and Dillon Seitchik-Reardon, published by Hardie Grant Travel, RRP $39.99.